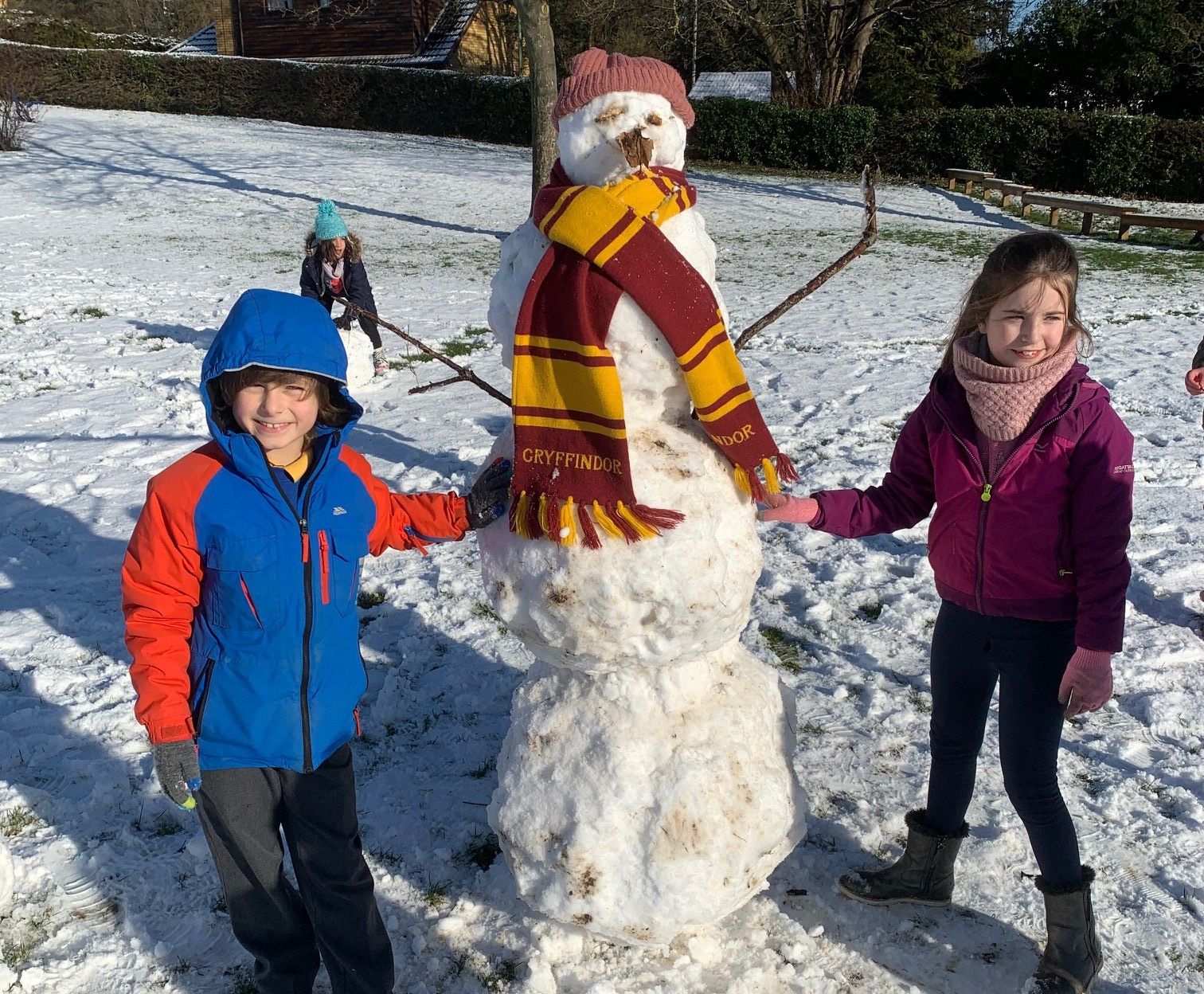 This week’s blog starts with an apology to sisters Olivia (Year 5) and Sophie (Year 3) who featured in the wonderful photograph I used as the title image in last week’s blog. When they found out that the image had been used, they were so excited (it was a great photograph) but then were left slightly deflated when they didn’t get a mention in the body of the blog. Hopefully this apology makes up for last week and just in case, I have also used the image again, below. We are all missing you Olivia and Sophie and can’t wait to have you back in school again as soon as possible.

In previous years, the snow on Sunday would have led to headteachers across the county feeling very anxious as to whether or not they would need to call a ‘snow day’ and then set up appropriate plans. Not this time. I do wonder whether the traditional ‘snow day angst’ is a thing of the past now. What it did mean for us, however, was that we were able to get outside in the gaps between lessons and build snowmen and go sledging. Mrs Stokes did find out I stole some of her trays! At lunchtime in particular, I had great fun with the Year 4 pupils who managed to build a series of snowmen, all of which were taller than they were. Even after the majority of snow had melted, these isolated, sorry-looking mounds of dirty ice were left dotted around the football pitches like some Stone Age monolith.

‘Biscuits with the Boss’ started this week. I must admit, I did feel a little despondent on Monday morning when session one had two pupils (and a mum) in attendance. That being said, it was a really enjoyable and informative chat with Aidan (Year 3) and Jamie (Year 6), both of whom had the obligatory biscuit. Only afterwards did I realise that the way my invites were sent out meant that the other pupils didn’t receive them on time. On Tuesday, therefore, session two had the full complement of attendees as well as some who didn’t make Monday. I had another session on Friday morning and have already sent out invites for next week’s sessions. Invites will appear in the pupil’s Gmail inbox as well as on the class feed. I am trying something different next week in terms of grouping pupils and will then decide going forward which works best.

One of the reasons for holding these sessions is to give pupils a chance to chat with friends informally; something they may not get the opportunity to do in the usual class meets. I also use them to find out how they are doing; how the lessons are going and what else they would like us to do for them. Our Head Boy, Jamie, came up with an idea of perhaps running a quiz event for pupils and families. I know quizzes were a favourite pastime of lockdown one but it might be something different we could do for a bit of light relief. I would be interested in your thoughts and I will explore this idea in my chats over the next couple of days.

Thank you to those who have shown your appreciation of the work #teamwhitehill is doing by sending in cakes and other sweet and savoury treats. They are appreciated and go pretty quickly once placed in the staffroom. I did enjoy a piece of the #teamhawke brownie on Monday, and a very nice fruitcake appeared on Tuesday. We also shared some cake to celebrate Ethan’s (Year 3) birthday at the beginning of the week; happy birthday Ethan!

Thank you to those of you who have already completed the latest parent survey. As I mentioned last week, your responses and comments do influence our practice and some of what we are currently doing as part of our remote provision is as a result of your feedback during lockdown one. There is never going to be a ‘one size fits all’ approach to delivering education during a partial school closure but we do feel that what we are offering is particularly effective and without wishing to sound too self-congratulatory, quite impressive. We have already been glancing at the results but will begin a more detailed analysis from Monday. If you haven’t completed it already, here is the link again. Thank you in advance.

As always, I have been so impressed by the engagement of the pupils and also the quality of some of the work being submitted.

In Year 3, Tanveer, Joseph and Jacob deserve particular praise for the films they made in which they examined the differences between the Aztecs and the Mayans. Creativity was in abundance as was the involvement of younger siblings in some cases. It is not all work, work, work in the Year 3 teaching team; they do need time to relax and get away from the screen. You may have seen on twitter that Mr Wells, Mr Lord and Mr Miley have turned the Year 3 TV studio into a cricket pitch for use at lunchtimes! There was some concern for the teddy fielding at silly mid-on, but I can assure you he is fine, although has asked for a helmet and a box for the next match!

Mr Denney and Mrs Davies were keen to highlight the work of the whole year group in maths this week. They have been looking at written multiplication problems and have been tackling some quite complex work. I was impressed with the work of our critical worker pupils in Year 4 on Wednesday, when they were carrying out a series of science investigations looking at solids, liquids and gases.

Maisie, Eleanor, Eddie and Olivia amongst other Year 5s have received Headteacher’s Awards for work they have been doing in English and Maths. There have also been similar awards for others, including Alicia, Isaac and Ellie for the effort they have been consistently showing since our remote provision began three weeks ago. Another Year 5 pupil helped out the teaching team this week when the technology failed in school. Mya immediately took over and carried on reading the next chapter of the story to the rest of the class. Great initiative – thank you.

I have seen some really impressive work from Year 6 this week. What is particularly pleasing given the circumstances we find ourselves in, is the fact that some of this work isn’t digital. It is actual hand-written, hand-drawn work which we were keen to sustain. Bea’s Raven booklet is one such example. Theo should also be commended for the effort he put into his booklet. The Year 6s have also been poets this week and Helena’s poem about the kiwi is inspirational.

One thing Mr Miley has taken responsibility for recently, as well as ‘PE with Joe’, is to see if we can get the House Cup up and running again. Pupils have been invited to submit their house points online via a google form and Mr Miley is keeping a close eye on them. Today’s winning House is Water House with a total of 292. Well done if you are in Water House and let’s see if you can retain the trophy next week. I know Miss McGurk was very pleased! Mr Miley has now reset the scores.

Well done to all of the pupils who took part in the Heptathlon over the last few weeks. Mr Miley is now working on the next whole school event which has been shared with pupils and teachers via their classroom pages. ‘Free Run February’ exchanges exercise time for miles and the intention is to see how far we can get.

So that’s it for this week. Two weeks until half term and then we can all have a break. My dad asked for a nice short blog for a change this week which of course means I went for the opposite! Sorry dad!