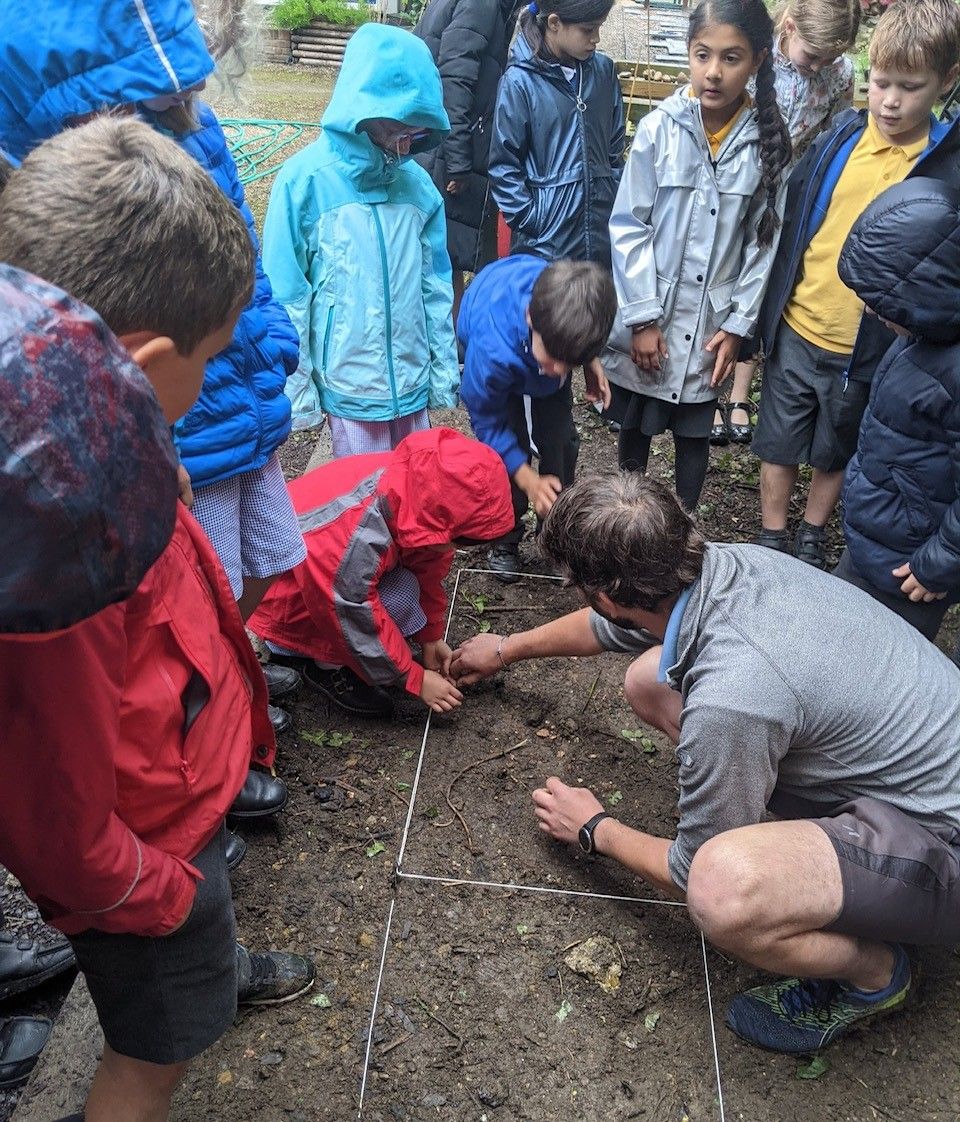 We are down to single figures now in terms of how many days are left in his academic year. That being said, there is still so much more we need to do and also, looking across the school this week, so much we continue to achieve each and every day.

Year 3s this week have channelled their inner Tony Robinson, from Time Team, and taken up the challenge of the Big Dig. Despite the weather in the first part of the week, Aztec and Mayan classes have been outside every day, examining their pits to see what they could find. In a change from previous years, one of our classes selected a site behind the studio classroom for their pit, whilst the other class went into the newly designated nature area at the bottom of the field.

Both classes were very successful and worked methodically ensuring nothing got missed. Cas from Hitchin Museum popped up on Wednesday to have a look at what they had found so far and was able to date one particular piece of pottery to around the 1700s. She will come back next week to help the pupils identify all their finds and to think about what they can learn about the site our school is built upon.

I was slightly put out at one point, however, when I was told that a pupil in Aztec Class had discovered a ‘really old’ coin. Imagine my dismay however, when I read the tweet about it later that night to find their idea of really old was 1995! If something from 1995 is ‘really old’ what does that say about me?!

Last year, we were unable to hold a transition day for Highbury pupils coming to join us – the current Year 3s. Instead, we held a series of small group tours which meant all pupils did get a chance to have a look around, take some photos and ask questions with a parent. We felt these were such a good idea that we have adapted them as one of the ways we will continue to facilitate transition going forward. On Monday and Wednesday after school this week, we repeated the tours with Highbury’s current Year 2s who will be joining us in September.

Again, they were very well received and I hope gave the pupils a chance to look around a quieter school before they join us next Thursday for a day with their new teachers. It was also an opportunity for me to begin to learn the names of our new cohort in advance of me seeing them each morning when I am playground duty during the school run.

On Tuesday, I enjoyed another excellent chess match against Henry (Year 3). As I mentioned last week, he is a very good player and learning all the time. I think we should be able to fit in another couple of games before the end of the year.

I managed to have an offsite meeting on Wednesday morning which was a welcome relief to all the zoom-style meetings I have had recently. It was with the new president of one of Hitchin’s Rotary Clubs and proved to be very useful, particularly as we think about our Junior Leadership Team from September. I have no doubt I will be referring to this link throughout the whole of the next year.

On Wednesday afternoon, Mr Moane, the Headteacher of Hitchin Boys’ School visited Whitehill. It was lovely to have the time to show him around Whitehill and chat about our core purpose. As well as chatting with me, Mr Moane also met with the Year 6 boys who will be starting at HBS in September. Our pupils certainly kept him busy with plenty of questions; it is always fascinating the level of detail they are keen to find out before they go.

The Year 6 pupils made the most of the weather on Thursday morning as they enjoyed a session of tennis. I was busy all morning and therefore didn’t get the chance to watch but the pupils certainly sounded like they had enjoyed their time, when they came into lunch.

Year 4 have been very busy again this week. The pupils in Orville Class were particularly proud of their ‘moving toys’ which they had designed and constructed. I had wondered why Mr Denney’s version of the toy caused great amusement amongst the pupils until I saw it for myself. One of the photographs used was of a Headteacher dressed as a roman soldier who kept jumping up and down and spinning around. Actually, the way my head is feeling at the moment, it was a particularly appropriate mechanism!

We did hold a short Achievers’ Assembly on Friday morning in which we celebrated several successful music exams. Joshua (Year 4) has recently passed his grade 4 piano; Isla N (Year 4) has had success with her Bronze Music Medal on the clarinet as has Aidan (year 3) on the flute. We were entertained with live music from Stanley (Year 5) on the piano (who had his exam later that day). The other trophy celebrated was for Sophie (Year 5) who won a local football tournament with Hitchin Belles last weekend. Let’s hope this is a sign for England when they take on Ukraine at the weekend.

The Wombles headed to Mayan Class, with Orville earning the Class of the Week trophy. The many house points awarded this week saw Earth win the House Cup. There are two more opportunities to win these awards before we announce who the overall winners are for the year.

After break, the Year 6s held their dress rehearsal for their production of Jungle Book. Unfortunately, we were unable to have a live audience and so the rest of the school watched via a live feed. It is such a shame for the pupils and staff that we couldn’t have a live audience in to see the result of all their hard work but I am pleased we have been able to work something out for next week so that the parents of our Year 6s can come and see one of four further performances. They just need to remember to clap loudly to make up for the limited numbers in the audience each night. I know they are going to love it!

Looking forward to next week, the Year 3s are out on Monday at Shepreth Animal Park. The pupils will travel by train and spend a day looking around and enjoying the experience. At the moment, the weather doesn’t look that great but compared to what it was last time they went (two years ago) it looks amazing!

I have already mentioned the Year 6 performances that will be taking place next week but there is an additional ‘concert’ taking place on Tuesday afternoon. Miss McGurk has organised a special music assembly which will be streamed to the classrooms. Pupils who haven’t yet had the opportunity to play in Achievers’ Assembly, for example, have been able to sign up to play for the school. I believe Miss McGurk has been inundated with pupils wanting to perform.

I seem to be tied up in meetings next week but am free on Thursday so that I can support our transition day. This is an opportunity for pupils to spend the best part of a day with their new teachers. Unfortunately, the Year 6s haven’t got this opportunity with the local secondary schools and so those who are in, will spend a day in various outdoor learning activities with Mr Miley and Mrs Small.

On Friday evening, we have our Year 6 Leavers’ Party which has been organised by the teachers as a way of saying well done and good luck to this amazing cohort. The entertainment has been confirmed and I have a willing group of volunteers to cook the food. Fortunately the weather looks reasonable which is a good job considering everything we have planned has to be outside!

Before I end, I would like to wish good luck to Libby (Year 3) who is organising a cake sale on Sunday in aid of the charity, Shelter. I look forward to hearing how she gets on.