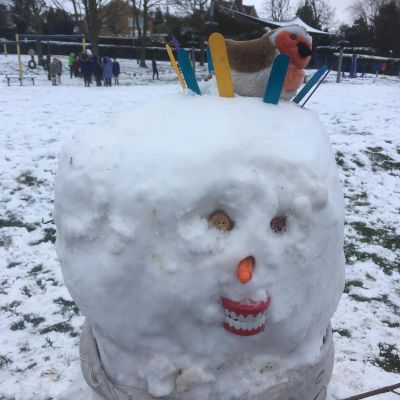 As my in-tray continues to grow in height, time has continued to speed up this week. Where does the time go?

Phase were in on Monday to work with our Year 6s again. It was another productive afternoon and both classes participated enthusiastically with the team and as always, the feedback was very positive. All of the work Phase does with our Year 6s and also the additional support we get with supporting some of our more vulnerable pupils doesn’t cost us anything. Phase is a local charity which has to raise funds to continue this exceptionally valuable work and one such event is coming up very soon. Over a 24 hour period on 22nd and 23rd February, volunteers will be aiming to run the equivalent of 480km. If you would like to support their work, I know they will be extremely grateful. The link to their sponsorship page can be found below:

In Mrs Bailey’s absence, I supported Recycled Fashion Club on Monday after school. I say supported… what I actually did was to be impressed with the creativity of the pupils taking part and be grateful that we had Mr Weller and three Hitchin Girls’ School pupils really helping. I did however, after a quick lesson from Jude (Year 6) man the iron so I could assist in the ‘polyfusion’ production. I was quite impressed by the end of the session in my ability to multitask. I could iron the plastic and read a report at the same time! Fortunately for the group, Mrs Bailey will be back next week as production continues ready for the show at St Christopher’s School on Saturday 2nd March.

I was at County Hall on Wednesday afternoon meeting with Simon Newland who is the Operations Director of Education for the Local Authority as well as several other educational leads from Herts for Learning. It was a very interesting meeting and I now feed back to several other groups of Headteachers I belong to. As I said to Mrs Cook when I got back, it is a very ‘grown up’ meeting and I really have to focus!

Mrs Beresford and I had a fantastic morning on Thursday as we carried out a series of lesson observations across the four Upper School classes. As part of our monitoring work, we spent time in Year 5 and Year 6 watching teaching, talking with pupils and looking at books. We were both so impressed with the quality on display and it was wonderful to see the pupils engaging with fantastic teaching. We observed lessons in maths, English and PE and it was lovely to see the rich curriculum Whitehill offers its pupils in action. All the pupils I spoke with about their work were articulate and knowledgeable and were clearly able to apply their understanding. Olly (Year 6) was one such pupil who impressed when he was chosen to read an extract from his diary entry based on the book, The Journey. In two weeks’ time, we will repeat the process, this time spending time in the four Lower School classes. I can’t wait!

There have been several nights this week where I was up each hour checking the weather. I know I go on a little too much about the snow but I can promise you, the majority of headteachers will tell you a ‘snow day decision’ is one of the hardest decisions they have to make as part of their job. Last night was one such time and I am so glad I was able to get the school open and make the most of the snow. The teachers were adamant we were going to do something and so after break all eight classes went out and created snowmen, snow families and snow pets. There were also a few giant snowballs. It looked fantastic and really highlighted the benefits of a creative curriculum. I hope you enjoyed seeing the photos on twitter.

Despite the weather and the extreme cold, we have had several sporting events this week and enjoyed success is several different sports. On Tuesday we had a Year 4 football match against Samuel Lucas. Well done to the whole team (which included two Stanleys) for the win. There were three netball teams out on Wednesday evening with fixtures against Highover. We had mixed results with one loss and two wins. On Thursday, we had another ‘A’ Team netball match against Offley securing a very good win. At the same time, we had entered a team in the district heats of the indoor athletics competition and won which means we progress through to the district finals later in the term. Thursday was particularly busy as we also continued to rehearse for the County Dance Festival. Miss McGurk spoke to me later in the evening and was saying just how impressed she is with the way the dance is coming together. The girls will be attending a dress rehearsal this Sunday before spending the next few weeks refining and perfecting the routine. The costumes are also looking very interesting and will add to the overall effect.

Achievers’ Assembly this morning started with the reports of these sporting successes and then we celebrated with Agnes (Year 3) and Freddie (Year 5) who received certificates for dancing and swimming respectively. Class of the week went to 5CC and Air won the House Cup. Our entertainment came from Henry F (Year 6) on the guitar and Alice (Year 6) on the piano.

Looking at my diary for next week, I keep staring at Friday, as that is the first day where I actually have space. On Monday, shortly after break, the choir will be setting off for the Young Voices concert at the O2. Mrs Cook and Mrs Threlfall travel with Miss McGurk, Mrs Burniston, Mrs Deller and Mrs Draper and so I am left to cover the office. Good luck if you need anything! Straight after school, I will catch a train to get to the O2 in time to see the concert and join the parents who have gone along to support.

I have meetings all day on Tuesday and then on Wednesday I am joining 4AL on their visit to Hudnall Park as they take part in workshops related to their science unit of work on Rocks and Soils. I have been told not to wear my suit and so I can only imagine it might be quite a practically based day. I am really looking forward to working with this great group of Year 4s.

I am back in meetings on Thursday but with the gap in my diary on Friday, I think it might be time to get the invites out for Hot Chocolate Friday.

On the sports front we have a girls’ football match against William Ransom on Wednesday after school and netball against Ickleford on Thursday. I say we have a football match on Wednesday but that does depend on whether the giant snowmen have melted enough to be removed for the pitch. If not, we will have a couple of extra players on our team.

The new school website is coming on well and I hope to be in a position to swap over just after half term. I’m just adding the last few documents and checking the links work. I hope you all be as impressed as I am with the improvement.