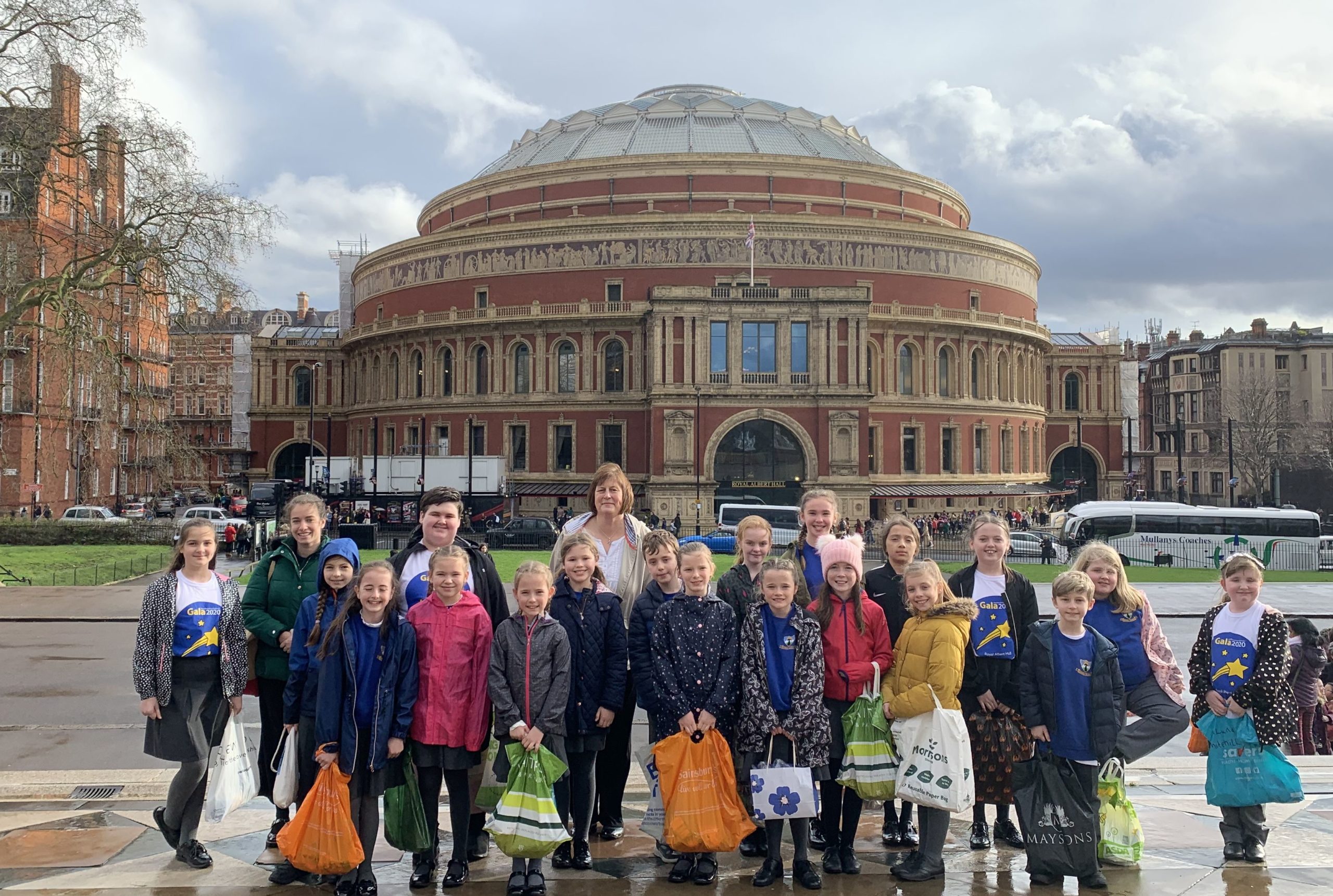 Another week and another blog which starts with reference to an event which took place last weekend. On Sunday, I joined Miss McGurk and Mrs Deller and members of the school choir for the Hertfordshire Music Service Gala at the Royal Albert Hall. We left school just after lunchtime so the choir could take part in an afternoon rehearsal. Whilst they were doing this, I took Mrs Cook to the Natural History Museum to show her all the things the Year 4s normally do during their visit as part of their topic work. It was also pleasing to report to Mr Denney that I didn’t manage to lose her! After a bite to eat, we took our seat to enjoy the combined schools’ choir and the Herts County Youth Orchestra perform a specially commissioned piece, as well as some other popular works. It was a great concert and another amazing experience for the pupils. The O2 and Albert Hall in a matter of weeks… that can’t be bad!

The Senior Leadership Team spent Monday working with our new Local Authority adviser and current senior Ofsted Inspector, Martin Roberts. It was an incredibly long and tiring day but one which was exceptionally productive. We have asked him to support us over the coming terms as we rearticulate our school’s curriculum offer. He will work with my leadership team, subject leads and class teachers to help us understand how to maximise the opportunities our pupils get in our topic based curriculum. I have seen the draft report (all five pages of it) and am delighted with what he has said. I was particularly pleased with comments he made in reference to the conversations he had with pupils.

“Pupils spoke confidently and were able to pick out specific detail of their learning… This is a clear strength.”
“Pupils presented as well-behaved and motivated. They were happy to discuss their learning and able to cope with deliberate sharp turns of questions and emphasis… This reflected learning that had solidity, roots and connectivity.”
“All pupils were proud of their work and achievements.”

Martin will next visit school in July to review the work we will continue to undertake in relation to our school improvement plan and the progress we will (hopefully) have made.

On Monday afternoon, Year 5 pupils had their second session working with Phase on their project. There is one more session to go this year.

I arrived in school early on Wednesday and then spent the next three hours on a conference call with colleagues from the NAHT. Most of them were in a room in Harrogate but to save money and time, I opted for the dial-in option. Mrs Cook and Mrs Lanni kept me supplied with coffee.

So far this week, I have conducted two tours for potential new teachers. I have mentioned previously that we are advertising for a new teacher to join the teaching team from September and I have been delighted with the interest we have received. What is really nice, however, is the way our class reps jump up and engage our visitors in conversation when we visit their classrooms. It totally supports the feedback we received from Martin Roberts, earlier in the week.

We hosted a mini-festival on Wednesday where teams from three local schools took part in a series of matches for Year 3 and Year 4 pupils. It was a lovely evening and the players represented the school wonderfully.

The highlight of the week in school was the opening of the new play equipment on the edge of the school field. The work was completed just after lunch on Tuesday which meant 24 hours later, we were able to let pupils try it out. As a treat, the Year 3s were given the honour of ‘cutting the ribbon’ and having the first play. It was clear form their reaction that Jude, Poppy, Zac and Izzy (Year 6s) did a good job in helping us plan the layout. After school, it was lovely to see the pupils from all four years making use of it, as well as some of their younger siblings after they had walked down from Highbury. I should probably apologise to those parents who had been enjoying the opportunity to get home earlier whilst the old equipment had been taped off. Time to think about that coffee stall again!

Reasonable weather meant that the pupils were able to use it again on Thursday lunchtime and I enjoyed supervising the pupils from all four year groups as they showed their creative and energetic sides.

After school on Thursday, we had two football teams playing in matches against Our Lady’s School. The ‘A’ Team lost and the ‘B’ Team drew. The reports during Achievers’ Assembly told us everything we needed to know! All that we have left for the teams now are the End of Season Rallies which take place over the coming weeks but of course are subject to postponement and cancellation.

These fixtures were celebrated in Friday’s Achievers’ Assembly where we were entertained by Delilah and Izzy (Year 6s) playing the flute and the guitar as we came in and left. The House Cup was presented to Earth this week and Kahlo Class were awarded the Class of the Week trophy.

Whilst I use these blogs as a way of celebrating the achievements each week, I would also like to reiterate the information I shared on Wednesday with regards the ongoing concerns related to the coronavirus. Unlike the decision headteachers fear making in relation to snow days, where we are very much on our own, all decisions related to coronavirus comes from the DfE and local authority. I am receiving twice-daily updates and following all the guidance given. At present, schools have been instructed to stay open and we have been encouraging pupils to maintain high levels of personal hygiene. Parents can help here too. Although it is still nine weeks away, we are thinking carefully about the Year 6 school journey to France and consulting on Thursday’s announcement by the Prime Minister. As soon as we hear anything, I can assure you we will let you know.

In about four hours, I will be ‘peeling the onion’ (whatever that means) as we prepare to present a ‘who done it’ to an audience of parents. I hope they bring plenty to drink! It has been interesting rehearsing, as it has been difficult to get all staff in the same place at the same time but we are there and ready to perform ‘Who Killed the Director’. I’ll let you know next week who was this year’s guilty party but there is a running theme as to who gets killed each time!

Over the weekend, Hitchin 12ths will be using the school for their sleepover and so I will be in on Saturday morning to finish clearing up after tonight’s fun. Mr Waluk has kindly agreed to come in and give me a hand.

You will have received details of this term’s teacher consultation evenings earlier today. Booking opens on Monday morning at 9.00am using our usual platform. Please note the need to skew the timings for Kahlo Class. This is also the time of the year when we ask parents and carers to complete an Ofsted style questionnaire which we use to support our ongoing school improvement work. Please look out for these when you come to the evenings but just in case there is any disruption to the two nights, you can download the questionnaire here and send it in for my attention. Thank you in advance for these.

Cas from Hitchin Museum is coming in on Wednesday to run two workshops with our two Year 4 classes on the Anglo Saxons. Cas is a regular visitor to and friend of Whitehill and we look forward to her joining us again.

On Friday, Jude, our Head Boy, has organised a pyjama-themed non-uniform day. He is inviting pupils not to get dressed for school next week but bring in a pound to spend the day in more relaxed clothes. I will be out of school with Mrs Beresford and Mrs McConnell Smith on a strategic planning day and so look forward to hearing from Jude how it goes.

That’s it for another week. The question is, have I managed to keep it short enough that my dad won’t moan? For those of you who may have missed it, this was his offering for a much shorter, alternative blog last weekend.

Monday: Putting the finishing touches to the book I’m writing on Brevity. It’s called ‘How to Keep Things Short Without Using Too Many Words Causing People to Lose Interest’. Catchy or what?
Tuesday: Fairly quiet.
Wednesday: Had to cancel the staff meeting on Time Management as I was double booked.
Thursday: Had the builders in to look at sound-proofing my office. It’s sometimes impossible to get some sleep with the noise pupils can make.
Friday: A Year 6 pupil told me she wanted to be a phlebotomist when she leaves school; I didn’t even know that she was interested in insects!

I have no words! Have a great weekend!
Best wishes,