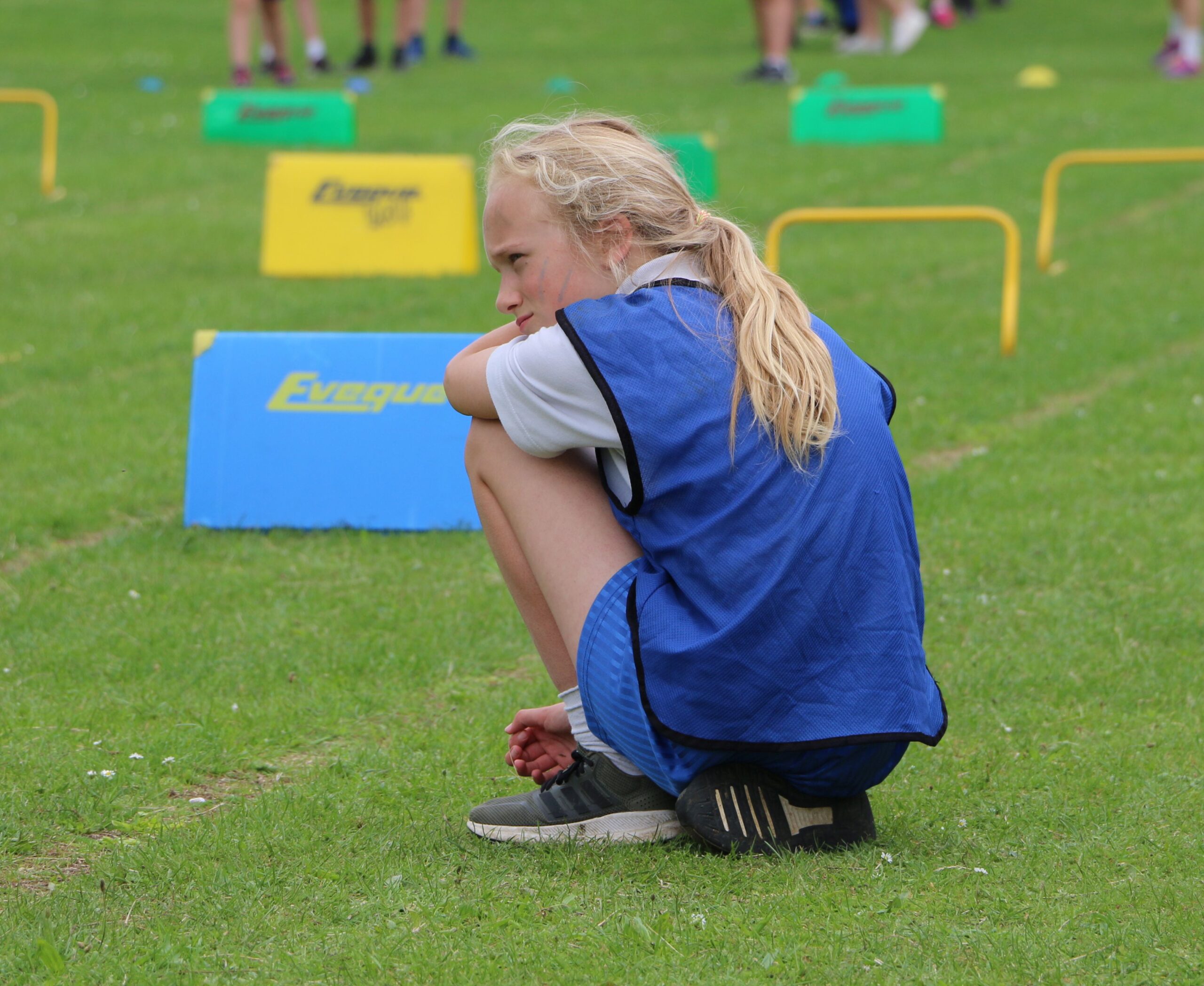 Although this is the first paragraph of the blog, it has been the last one written. I didn’t want to tempt fate by writing about getting to the end of the year without any of our bubbles popping until the very last moment but I can now say we have! Given what I am hearing at the moment we have been very lucky, although some say you make your own luck. Thank you for everything you have done to keep everyone safe and to keep all our pupils in school over the last year. It’s quite an achievement.

I will start this week’s reflections a week ago, when the Year 6s returned for their leavers’ party. The weather started very kind indeed and the pupils were straight onto the ‘bouncy entertainment’ including a new toy for this year, a wipe-out game in which the pupils (and in some cases staff) had to jump and duck and avoid getting ‘splatted’. It proved highly entertaining for all with some proving to be real stars, such as Karina, and others getting wiped out almost immediately, such as Molly! Sorry, Molly! Food was in the form of a BBQ thanks to a group of volunteer parents including Mrs Trussell who was dedicated to the cause of finding takers for her veggie-burgers. There was a surprise visit from our friendly ice-cream man where the pudding of choice amongst the pupils was a weird coloured slushy. Well, the pupils and Mr Miley!

It was all going so well and although we could see the clouds forming, we were convinced we would get through to eight o’clock without getting wet. How wrong we were. With 30 minutes to spare the heavens opened and the fun outside turned into an impromptu disco and sing-along in the hall. I am not sure the staff from the bouncy castle company appreciated having to stay outside to pack away. Despite the sudden ending, I think I can safely say a great time was had by all and it was lovely to be able to give this wonderful cohort the party they deserved.

Despite the prospect of a thoroughly miserable walk due to even more rain, the Year 6s were lucky on Monday and were able to complete their local river study walk in relatively pleasant weather. It was quite a mammoth walk thanks to Mrs Small’s determination for the pupils to see as much as possible and 12 km later, the pupils were back at school and exhausted.

We have achieved so much this year, despite all the obstacles placed in our way. The one thing left to ‘tick off’ this week was sports day. Although we had to adapt it and unfortunately not have parents attend, the day went ahead as planned. We had the field events in the morning and the track events in the afternoon. It was a wonderful day, highlighting the fantastic supportive attitude of all our pupils. Points were scored by all pupils throughout the day and by the time the final totals had been calculated, Earth House were declared winners and retained the trophy they won in 2019.

You will note that I said ‘unfortunately’ we weren’t able to have parents join us, in the previous paragraph and from my perspective, it was a shame. Our parents are always so supportive of all of the pupils that it never feels over-competitive. I hear some horror stories from colleagues around the country. That being said, a number of pupils did comment on Wednesday that they quite liked it without a huge audience. They suggested they felt there was less pressure. Quite an interesting observation and one which has been noted.

Over the last few days, Dr Ray, our Chair of Governors has been in to chat with pupils (a pupil voice) about several aspects of the school’s practice over the year. Working with a couple of other governors, she explored pupils’ thoughts on well-being as well as the teaching of the humanities subjects. Dr Ray was exceptionally complimentary after every meeting and I look forward to discussing her final report with the governors. She has already shared one piece of feedback with me in which one Year 3 pupil decided to re-enact a scene from Kindergarten Cop and provide detailed understanding of the growth potential of a certain part of the male anatomy! How that came up (apologies for the turn of phrase) in a discussion about geography and history makes the mind boggle! It does show our RSHE teaching must be pretty good, however!

The pupils’ books all came home on Wednesday as we got ready for the end of term. From September, all our pupils will get a complete new set of exercise books. We normally send books up for pupils to continue working in but because of lockdown and the desire to give the pupils a fresh start in September, I decided all pupils could have brand new books. There is nothing quite like writing on the first page of a new exercise book at the start of the year.

On Thursday morning, the Year 5 pupils shared the music they have been learning with Mr Brunton this year. Despite the restrictions across most of the year, Mr Brunton has adopted the school’s attitude of ‘how do we make this work?’ and provided flute and clarinet tuition for this cohort. It was lovely to see and I was impressed how well they did. I hope some will continue learning their instruments as they move into Year 6.

On Friday morning, I took our final assembly. The Year 6s were my live audience and the rest of the school joined from their classrooms. It was also lovely to see so many parents able to join us. This is certainly something we will keep and hope that you can join even more assemblies going forward.

It was a real celebration of success and I enjoyed presenting so many awards. As well as presenting the usual weekly awards, we looked back across the year and presented Class of the Year to Aztec Class and Womble of the Year to Kahlo Class. The House with the most House Cups this year was Earth House. For the record, this week’s winners were: Class of the Week – Voyager; House Cup – FIre; Womble Award – Kahlo Class.

We also took a few moments to think about those people, pupils and staff, who are leaving Whitehill today. Obviously we celebrated our brilliant year 6s who have had such a successful four years with us. We also said goodbye to Isla (Year 4) who will be moving to Ireland with her family over the summer. I wrote to parents in a little more detail at the start of the week about the four staff members moving on and of course, Mrs Beresford, Mr Miley, Mrs McKenna and Miss Mills will all be missed as they begin their next adventure.

The main award presented in this special Achievers’ Assembly was our Core Purpose Champion Award. Every member of staff gets one vote for a pupil from any year group who they feel has best demonstrated ‘Profound individual Growth’ this year and perhaps across previous years too. We had 16 nominees this year who all receive a personalised certificate outlining the reasons for their nomination together with a small medal. The overall winner, who received the most nominations, was Daya (Year 6) and she also gets her name engraved on the glass trophy we proudly display in our reception area as well as a replica for herself. Well done to Daya and all of our nominees this year and thank you for embracing our school’s ethos.

As I didn’t get to say a few words after the Year 6 show this year, I took the opportunity to address all our pupils and parents and urged them to think positively about their time at Whitehill and the last 16 months in particular. We need to dismiss the notion of ‘lost learning’ and ‘academic catch-up’ and replace it with the Greek idea of ‘Kairos time’ which looks to measure opportunities rather than hours and minutes. If we all think about what pupils have done and what they have achieved rather than what a cohort in the past has done, or perhaps what we might have had planned if we hadn’t been hit by a pandemic, then outcomes are considerable and truly impressive. Pupils can be proud of all they have achieved.

So that is it. A blog published slightly earlier than usual as the pupils prepare to say ‘see you in September’ or ‘see you around’ to their friends and to their teachers. On behalf of all the staff, thank you so much for all your kind gifts and lovely messages. I know I speak for everyone when I say they are truly appreciated; perhaps even more so this year after everything we have been through.

Have a wonderful summer, whatever you have planned and I look forward to welcoming back three quarters of you on September 2nd. I am off to have a bit of fun with my incredible team and yes, that giant inflatable obstacle course is for the staff! Wish me luck!

Thank you for looking after my granddaughter Lydia and her sister through what has been a dreadful year. We are so grateful!