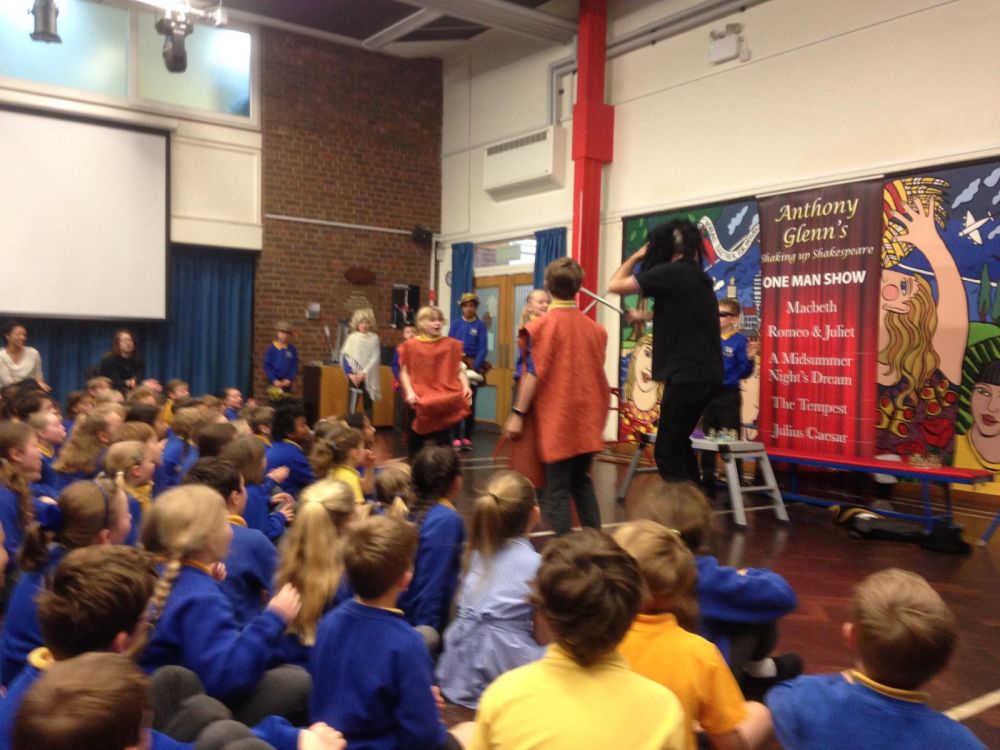 We’ve made it! The end of the Spring Term and the end of another very productive 12 weeks at Whitehill which was capped off with our Shakespeare themed week filled with all things related to the Bard of Avon.

I’ve enjoyed visiting the classes and the workshops over the course of the week but unexpected pressure on my diary meant that I wasn’t able to see as much as I would have liked. Fortunately for me, Mrs Beresford was on hand to ensure everything was in order and she has made sure she has touched base with me several times a day to share with me the highlights.

Mrs Ray, one of our governors visited on Tuesday and we began the day talking about potential changes to our school report format. We were looking at how our current assessment system in school can be used by teachers to help produce the reports and also how this should then be written to make it meaningful for parents. As I am sure you can imagine, this is a million dollar question but we do feel we made significant progress. There will be subtle changes to this year’s reports which I will explain closer to when they will be sent home and more importantly, as I reported in Thursday’s newsletter, I would like to consult with parents in the Autumn Term to make sure we are truly making these reports manageable and meaningful.

After break, Mrs Ray joined me in a walk around the classrooms and we were once again impressed with the two ‘Class Reps’ who came and introduced themselves and explained what their classes were working on. Helena represented 4GD and Evie represented 5CC; I was very proud of both pupils and Mrs Ray was highly complimentary. Part of our tour took in one of the Contender Charlie workshops which the Year 6s were enjoying. These workshops looked at Romeo and Juliet and as well as an overview of the story, pupils looked at aspects of the feud between the two families. For the remainder of the day, I kept bumping into Year 6s and Year 5s with red or blue ‘war paint’ on their faces.

On Wednesday morning, Anthony Glenn returned to Whitehill and he entertained and amused the pupils with his performance of A Midsummer Night’s Dream. He is now a regular visitor to Whitehill but every time he comes and shares his talents with us, we are left wanting more. I have no doubt he will be back later in the year. For the remainder of the day, it was the turn of our Lower School pupils to have workshops with Anthony and when I visited, they were looking at stage fighting – an essential part of any Shakespearean play.

Across two nights this week we had our Spring Term parent consultation evenings. It was lovely to chat with many of you and the school felt really vibrant. We were able to show you the amazing purchases we have made thanks to the hard work of our Friends’ Association. We had our chicks on display to keep old and young amused and we also had our annual parent surveys for completion. Thank you to all who did complete a questionnaire. It is one of my tasks for the Easter break to evaluate the responses and see what trends appear and how these compare to previous years. We were kept nourished by an amazing spread of cakes and savouries and judging by our twitter feed, the refreshment sale raising funds for #TeamSuperSeraph was exceptionally popular and successful. Well done to all involved and thank you to all who supported. We have several other events planned to support the fundraising and details will come out in due course.

I mentioned my preoccupation and pressure on my diary earlier in this blog and on Wednesday and Thursday this week I spent the majority of my time working with a range of professionals, challenging outcomes and championing pupils. It’s not been easy and at times you realise how the role of the headteacher can be quite far removed from the day to day education of children. Fortunately, I have an amazing team at Whitehill who ensure the day to day business, which the majority of pupils and parents see and appreciate, continues.

We had one sporting event this week, with our netball teams playing games against St Andrew’s. I popped out to see some of the matches and I was impressed with how both teams coped with the near freezing spring temperatures!

Our final Achievers’ Assembly of the term was a slightly extended affair. We enjoyed the opportunity to share with each other what we have learned during Shakespeare week with pupils singing, dancing, acting and stage fighting.

As well as this Shakespearean celebration, we had the usual awards, presenting 6CB with Class of the Week and Water with the House Cup. We celebrated some music exam success with Poppy, Yasmin and Samuel (Year 5s) worthy of particular praise with each of them being awarded a distinction in their guitar grades. As the winter sport season comes to an end, I was also delighted to present some medals to members of our football teams. Well done to everyone who received an award or certificate in today’s assembly.

As we finish for two weeks, I would like to wish you all a pleasant break whatever you might be getting up to. I know we have a group of Hedgehogs heading off for a rugby tour and I look forward to hearing about it when we return. Although there won’t be any pupils in school, school will be quite a busy place. The heating / plumbing work will finally come to an end so we can move forward with the final phase of redecoration. Mr Waluk is planning to get the dining room floor finished so we can lose the cardboard carpet! Our IT technician is also hoping to commission our new server which will future-proof our network. I might even get my favourite toy out, the pressure washer, and clean up some of the exterior parts of the school. Let’s see if you spot my handy work when we return.

We return to school on Tuesday 23rd April and there are two key events in my diary at the moment. On Wednesday 24th we are holding a Year 6 SATs Information Evening for parents. Mrs Bailey, Mrs Bryan and the team will explain the arrangements for this assessment week and answer any questions you may have. Probably more enjoyable (no offence Year 6 Team) will be the Friends’ Association discos which happen on the Thursday evening. Tickets are still available from our Friends’ committee via the usual channels.

All that is left for me to say is one final thank you. Since I started at Whitehill, I have written a blog every Friday during term time. To be precise, that is 224 blogs. Each and every one has been checked before it has been published by Mrs Threlfall. She has been my ‘go to’ person to check for typos and obvious mistakes. As you are all aware, Mrs Threlfall retires today after 16 years working in our school office. She will be truly missed and I know you will join me in wishing her all the very best as she enjoys a little more time to watch her beloved rugby. She has promised me she will continue to read my blogs but she might not be the first anymore and so perhaps I should apologise for future typos in advance!

Have a great couple of weeks. See you all soon!