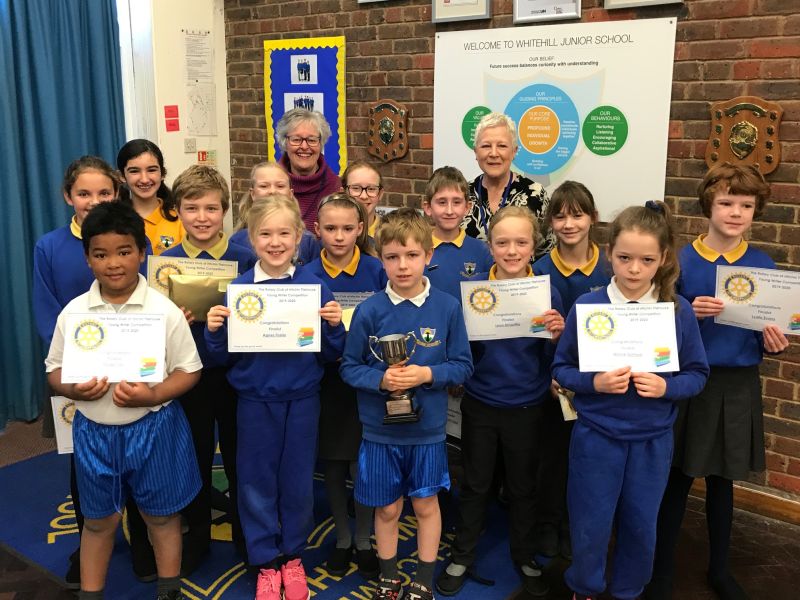 Halfway through the academic year! That was quick! But before we have a chance to chill for a few days and enjoy a break it’s time to look back at the week and look at what we have been getting up to as the weather (I hope I am not speaking too soon) improved considerably.

At the start of the week, I was really able to get to grips with my ‘to do’ list and cross off a few things which have been haunting me for some time. Despite a few unplanned interruptions, Monday and Tuesday were very productive days for me. I say ‘unplanned’ but by now, I know that there will always be ‘unplanned’ interruptions most weeks, and so perhaps I should refer to them as ‘planned unplanned’ interruptions. I am beginning to sound like an infamous American Defence Secretary, Donald Rumsfeld, with his ‘known unknowns…’ speech! Anyway, back to the week at Whitehill…

Our assemblies on Wednesday were taken by our House Captains and their Ambassadors. They presented their understanding of ‘being friendly’ and ‘being friends’. These assemblies are also watched by the staff who go to their respective houses and the feedback was so good. The theme built upon assemblies I had led this term highlighting the need to be respectful towards all members of the school community, even if we might not necessarily get a birthday invite. I think most pupils understand.

The Year 5s enjoyed this year’s K’Nex challenge on Wednesday and spent the day in the company of a local engineer who talked to them about the scientific principles behind this year’s theme (I’ve remembered not to share the topic this year) before setting them off with the competition of designing and making a model. I popped into the hall several times during the day and was really impressed with the teamwork and imagination on display. Well done to the two winning teams – Samuel and Nicolas from 5CC and Jonathan and Freddie from 5SS. The feedback from our visiting engineer was also exceptionally pleasing; he couldn’t praise the school highly enough.

One of our football teams was in action after school playing Samuel Lucas. It was a very hard-fought game and Samuel Lucas were very good. Despite taking the lead, the boys were not able to hold on and lost the game 3-1. Well done to all who played and good luck to Samuel Lucas in the final of the league competition.

Feeling in the ‘football mood’ I went along to support our very own Miss Gooderham on Wednesday night as she was playing for MK Dons against Oxford United at Stadium MK. It was a great evening and I would encourage anyone interested in football to venture over to Stadium MK to cheer the team on. The next two home games are on 24th February and 3rd March, both 2pm kick-offs.

Mrs Beresford and I spent Thursday morning watching the teaching and learning taking place in our four Lower School classrooms. We saw some maths and English and enjoyed chatting to the pupils and finding out what they were learning and what they liked about the lessons. These observations form an important part of our school improvement work and provides valuable information to discuss and act upon in staff meetings and share with governors and the local authority.

After school on Thursday, Miss Gooderham and some parents headed over to Knights Templar School with our Year 4 Speed Stacking team to take part in a Sports Partnership competition. It’s quite impressive watching the pupils complete the challenges and speed stacking is much harder than it looks to master.

One of our Governors, Mrs Ray, spent the morning in school on Friday and joined in with another busy Achievers’ Assembly. As well as presenting the House Cup to Fire and the Class of the Week trophy to 4AL, we also enjoyed music from Isaiah (Year 5). Another highlight was presenting the prizes for this year’s Rotary Club Writing Competition. Mrs Beresford welcomed Mrs Brown from Rotary to talk about the shortlisted finalists and then present the prizes including a very impressive cup to our overall winner, Frank (Year 3). Well done to everyone who was celebrated today.

Mrs Ray also joined me and eight Year 3s for another Hot Chocolate Friday. Once again, many (many) cakes were consumed but we chatted about many aspects of school life and it gave me an insight into the thoughts of our youngest pupils. Mrs Ray was so impressed with her morning, she sent me over the following and asked me to share it with you all…
“I was impressed as ever with the way all achievements are celebrated – from story writing with Rotary to goalkeeping skills in a losing game. I was also impressed with the progress made by the Year 3s in just a term and a half – confident and chatty and able to describe their teachers in a word – what better accolade than ‘fair’ and ‘fun’.”

I really enjoyed the visit to Hudnall Park last week and this week, it was the turn of Mr Mills Junior to accompany the Year 4s on Friday as Mr Denney and 4GD went to enjoy a day of activities based on their science topic of Rocks and Soils. It was another great day although I think they enjoyed the better weather. Question is… who won the ‘bug bingo’?

So that is it for the half term. I am off to play football for Herts Heads before putting my feet up for the week. I’m off to Barcelona for a few days over half term, including a visit to the Nou Camp. It will be lovely to switch off, recharge and prepare for the second half of the year.

We return to school on Monday 25th February and don’t really start off slowly. I am meeting with Mrs Avey at Highbury on the Monday and will be heading up to our feeder Infants after Imogen and Amy-Louise (Year 5s) have led my assembly for me. I have two days of meetings on Thursday and Friday, before starting one of the craziest weekends we have had for some time.

Straight after school on Friday, I will be heading up to Cannock to join Mr Miley, Mr Lord and the trampoline teams for the National Finals of this year’s schools’ competition. Having watched as much as possible on Saturday, I will be heading back south and straight to St Christopher’s School to join Mrs Bailey and the Recycled Fashion Club as they take part in their competition. In between all of this, Miss McGurk will be taking a group of Year 3s to Kingshott to participate in their fun Year 3 Festival of Sport.

If that wasn’t enough, can I also remind you that one of our pupils, Lyla (Year 4), will be holding a charity disco on the evening of Friday 1st March at Blueharts Hockey Club. She has been issuing tickets to pupils this week but she still has a few more available for a donation to her chosen charity, Cancer Research UK. If you would like to support her project you will be able to catch her and her mum, Debbie, on the playground during that first week back. Let’s see if we can help her reach her target.

Anyway, that’s it for the week and the half term. See you all soon!