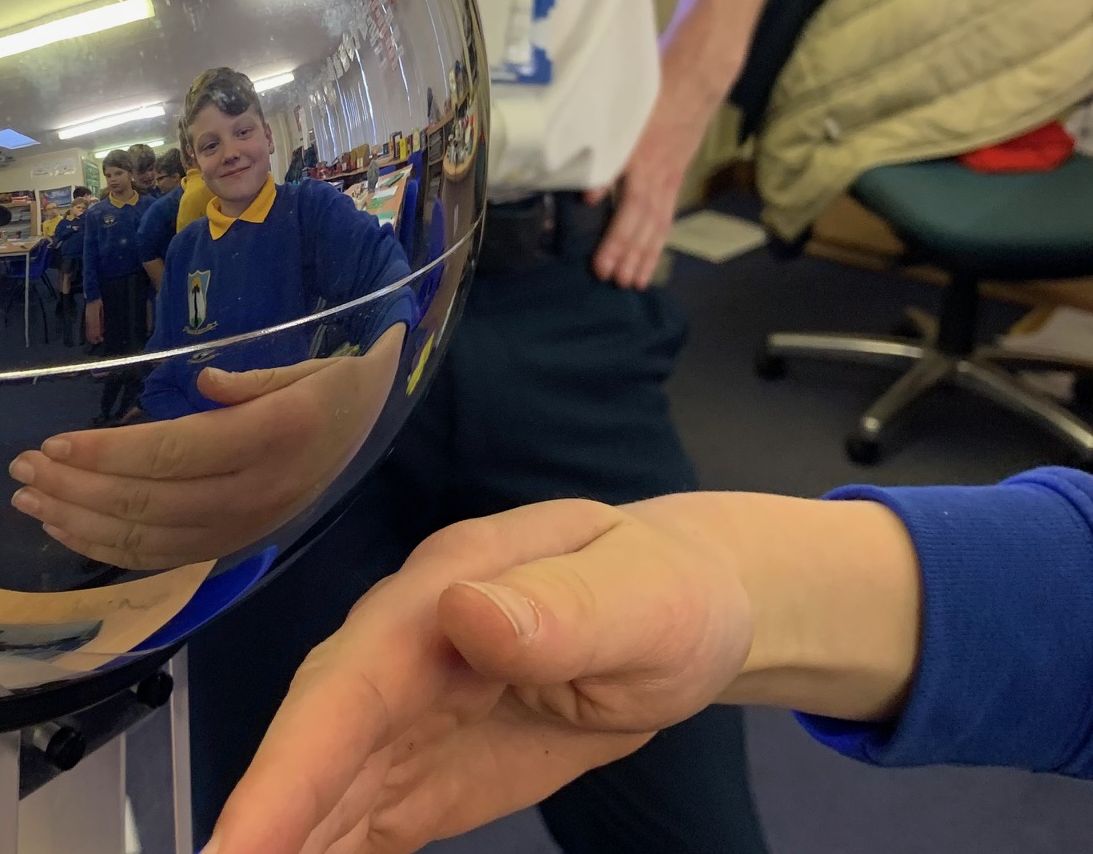 Can I start by thanking the Friends’ Association and all who supported the Christmas Fair at Highbury last Saturday. It was lovely to see many of you there, enjoying the activities whilst raising funds for both Highbury and Whitehill. I am sure many of you will have seen the tweet announcing the amount raised which was around £1850. Whitehill’s project for the all the money this year (and perhaps next) is to replace some of the older wooden play equipment which has seen better days. I can confirm an order has been made and work will commence shortly. I am sure the pupils will be impressed with the new activities, which were chosen by our Head Boy / Girl team.

I have had a really interesting time this week. Very little has been removed from my ‘in tray’ but it has felt very productive and very busy.

After my meeting and greeting duty at the gate on Monday, I did a quick tour of the school to make sure everyone was ‘ok’ before heading down to the station to catch my train to Hayward’s Heath, where I was based for two days of NAHT meetings. On my way, I scheduled some time to visit a former Whitehill colleague’s current school in London.

Miss Hudemann taught at Whitehill from 2013 until July 2016 after which she moved to teach for two years in New York. Upon her return in 2018, she took up a teaching position in Thomas’s School – Kensington. Some of you may recognise the ‘Thomas’s’ name as this is the school which Prince George and Princess Charlotte attend (although they attend the Battersea site). It was lovely to catch up with Miss Hudemann again and spend a few hours with her Year 4 class. I spent time in an English lesson and a maths lesson, as well as enjoying a delicious lunch in their dining room, which, given the nature of the school, is in a separate ‘house’ two streets away. Being a fee-paying school, I was very interested to compare the work of the pupils with ours and also get to understand the complexities of teaching in the public school sector. There were some noticeable and expected differences but at the same time, there were many similarities. Spelling, for example, is an area both cohorts could improve!

I am delighted that Miss Hudemann is going to be able to come and visit Whitehill in a couple of weeks, as she breaks up for Christmas one week before us.

Whilst I was away, Phase visited Whitehill again to work with our Year 6 pupils and on Tuesday, Year 4s went back in time to the Victorian era. They looked amazing when they arrived in school and really embraced the chance to dress up. I also think Mr Denney quite likes the opportunity to brandish his cane if I am being honest! They spent the morning at the British Schools Museum, spending some time in the original Victorian Gallery classroom as well as looking around the museum. They continued the experience back in school upon their return.

I was back in Hitchin shortly after school on Tuesday and in plenty of time to join Mrs Ciepiela for her book launch. It was a real privilege to have been invited and see the final result of months (and months) of very hard work. Her book, Kingdom of your Mind, looks to support children cope with the stresses and strains of everyday life and as she states, ‘make friends with and take ownership of their mind’. It also features a number of illustrations which have been drawn by Whitehill pupils and so is extra special for the school. I have read the book several times now and am really impressed with its approach to supporting children and have no doubt we will make use of its ideas as part of our pastoral support programme. Well done, Mrs Ciepiela!

On Wednesday, I tried to catch up on emails from the previous two days but also spent some time in a meeting discussing our school’s travel plan and our recently awarded Modeshift School Travel Award. We had the Director of Education from Herts for Learning visit on Thursday morning and, along with Mrs Beresford, we discussed a whole host of issues ranging from support visits to my performance appraisal! That’s enough about that!

Over the past few weeks, we have shown prospective parents around the school as they look to make a decision on which school to send their children. The majority of tours we run are for prospective Highbury pupils but of course, in three years’ time, they will be joining Whitehill and so it is important to see the whole package. The Year 6 pupils run these tours for me and depending upon which pupils you get, the tours last anything from twenty minutes to several hours! One thing which is consistent however, is the feedback I receive from the parents at the end. It is always so positive, highlighting the pupils’ confidence and enthusiasm. Thank you to all the pupils who have led these tours over the last few weeks.

On Thursday afternoon, Mr Goldring, a science teacher from Hitchin Girls’ School, came and taught a lesson on electricity for both Year 6 classes. This particular link has been established by Mrs Little and Mr Denney who look after the science curriculum and is an opportunity to bring in a few resources or practical ideas which we would not normally be able to provide. This session saw the pupils use ammeters to measure electrical current; set up circuits to test conductivity and then use a Van der Graaff generator to generate static electricity. It was a shocking lesson! Mr Goldring will return several more times this year to run sessions in some other areas of the science curriculum.

There was no full Achievers’ Assembly this week again, as on Friday morning the Year 3s held their dress rehearsal for Robin Hood in front of the rest of the school. I wasn’t able to watch but am certainly looking forward to seeing it twice next week. The feedback from the staff and pupils who saw it today was simply brilliant. I can’t wait.

Despite not having the assembly, we did find time to present the House Cup to Air and the Class of the Week trophy to Voyager. I also presented three Headteacher Awards to Jamie, Leroy and Nate (Year 3) as I received such fantastic feedback from Breakfast Club about the way they conduct themselves when walking down from Highbury in the mornings.

I have had several conversations and pieces of correspondence asking about wrap-around provision in recent weeks. On Friday afternoon, I met with Mrs Avey to begin discussions as to how we might be able to solve the problem of a lack of spaces in the after school club run at Highbury. It is imperative we find a solution as the demand is there and I have made it a personal target to find a way of offering wrap-around care at Whitehill. It is clearly not going to be a quick fix but I promise I will look to find a solution for Whitehill pupils. I will keep you informed as to my progress.

Although next week is another four-day week thanks to the General Election, it looks like it is a case of ‘hang on to your (wizard) hats’ as the diary looks crammed.

On Monday morning, we are joined by a member of St John Ambulance who is going to talk in assembly about her work as a volunteer. This is part of our Head Girl, Poppy’s ‘everyday heroes’ initiative. At the same time, our Year 3s will be heading up to Highbury to watch their Christmas performance before we return the favour later in the day when the Year 2s come and watch the Year 3 production after lunch.

Poppy’s Hogwarts’ themed day takes place on Tuesday and a letter came out earlier this week inviting pupils to wear a slightly different uniform should they wish to get fully involved. Each class will take part in a selection of four different Hogwarts’ themed lessons run by the class teachers. That is after they have attended a special assembly which may include a ‘sorting hat’ experience for some.

After school, we have a team competing in a basketball competition and then later that evening, the Year 3s will be performing their production, Robin Hood, to their families. As soon as the curtain call comes to an end, Mr Waluk and I will be dismantling the stage and packing it all away as on Wednesday morning we have Anthony Glenn coming in to perform A Christmas Carol for the pupils as our Christmas treat. Thanks to the election, we have had to move a few things around next week and therefore as Anthony finishes, we move in to decorate the hall ready for our Christmas lunch. Once again, a change in uniform is offered for pupils on Wednesday should they wish to wear a Christmas themed jumper.

I have two meetings later that evening, both involving food, and so it is going to be a little like that episode of the Vicar of Dibley where Geraldine Granger is moving from Christmas lunch to Christmas lunch, struggling to eat the sprouts!

As I have already said, we are closed on Thursday, although I hope to be able to get access to my office to get a few things done in relative peace and quiet.

On Friday morning, the Year 6s have invited their families into school to see the work they have been producing as part of this term’s topic work as they host their ‘revolution assembly’. After school, if I haven’t over indulged the night before, I have a football match for Herts Heads.

Told you it was a mad week! Anyway, that’s it for now; two days to prepare.