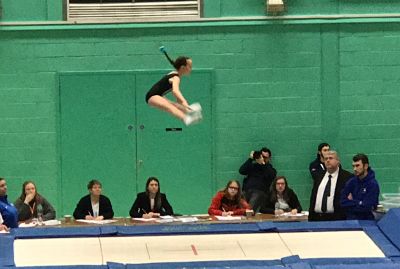 It was an early start last Sunday so that I could get to the University of Hertfordshire for the Zonal Finals of this year’s trampolining competition. Poppy and Yasmin (Year 5s) were kicking things off as part of the U11 Novice Team at 8.30am and I wanted to make sure I got to see everyone bounce. Freya and Izzy were next up for this team and all bounced brilliantly! Although the team didn’t quite do enough to finish in the top three, Izzy placed second overall and therefore qualifies for the National finals in March.

Lola (Year 6) was competing as our only Elite gymnast and she too finished second, joining Izzy at the Nationals. Monty (Year 4) was also competing as an individual in the boys’ Novice competition and he nailed his two routines to finish third. That made three National finalists with two teams still to bounce.

The girls’ Intermediate team were next, made up of Isobel, Lily and Nia (Year 6s). The three girls bounced very well indeed securing second place as a team which, as I am sure you have guessed by now, gets them a place at Nationals. Our final team to compete was our Intermediate boys’ team of Charlie, Max and Zack. Again they bounced well with Zack, in particular, producing a phenomenal voluntary routine to secure a second place for the team but a first place as an individual. And yes, that means three more national finalists.

Well done to all twelve gymnasts for getting this far and performing really well on the day. Thank you, too, to the families and friends who supported. I am looking forward to another trip to a National Finals at the beginning of March, although I am quite glad we don’t have to venture to Belfast this year!

I seem to have been tied up in meetings and phone calls for most of this week which means I haven’t managed to get around the school as much as I would have liked to see the pupils working. The teachers have been keeping me up to date, however, with what’s been going on and I have caught a glimpse of some activities. Although some of the meetings have not been the most enjoyable, I did enjoy giving a lecture / tutorial to third year BA students at the University of Bedfordshire on interview technique and applying for jobs.

On Tuesday, the Year 3s had a great sessions with Cas from Hitchin Museum looking at all things ‘stone age’. Looking at the photographs, they had a go at building shelters and even tried their hand at a spot of hunting with bows and arrows. Of course, no real animals were injured in the making of this workshop!

On Wednesday afternoon I offered to support the two Year 5 classes as they had their music lessons with Mr Brunton. He is an amazing teacher and really makes learning an instrument fun. I was impressed with both classes and there are some very talented musicians in both classes. I have agreed a date with Mr Brunton for a showcase assembly (28th March) and so parents of pupils in Year 5 should look out for information coming home shortly.

The NSPCC were back in school on Thursday to run the workshops for our four Upper School classes. These were very well received and followed on from the assembly given last week. This work forms a valuable part of our PSHE and Protective Behaviours work for the pupils. Thank you again for your support of this project and the NSPCC charity with the non-uniform day last week.

I went swimming on Thursday afternoon with 3EM. It gave me a chance to observe the session and catch up with the teaching team at Hitchin Swimming Centre. I was on poolside for the hour and got to see all three groups in action. Well done to all of the pupils who worked really hard and did a lot of swimming during the lesson. I was particularly impressed with Edward B who also received a special mention from the swimming teacher.

We had a lovely Achievers’ Assembly on Friday morning to celebrate the trampolining mentioned earlier as well as the first few football matches of 2019. Our ‘A’ Team played Oughton on Monday and won and we had two girls’ teams playing against Samuel Lucas on Tuesday, with both teams winning. Well done to all our footballers. The musical entertainment was provided by Kezia playing the piano and Samantha playing the flute. Well done to Earth who won the House Cup and to 6TB for being awarded the Class of the Week trophy.

Straight after the assembly I met with a parent who is interested in the vacant parent governor position. Can I remind all of you that the deadline for submitting a nomination for this post is 9.00am on Tuesday? Any questions, please contact Mrs Cook on Monday.

Looking ahead to next week, Phase are back in on Monday for our Year 6s and will carry out workshops with both classes.

We have several sporting fixtures, including netball matches against Highover and Offley and then on Thursday, we have the district heat of this year’s Indoor Athletics competition.

As I am sure you can imagine, I will continue with the current theme of back to back meetings but I have set time aside in my diary to visit classes and see what the pupils are getting up to. This is the part of my job I enjoy the most. One of the other aspects of my role I really enjoy at the moment is doing gate duty in the morning. It has really given me the opportunity to talk to lots and lots of pupils on a daily basis, even if it is just to say ‘good morning’. My day doesn’t really start until Lily (Year 3) has come over for my morning greeting! It has also given me the opportunity to chat with many more parents than used to happen under the fixed start. I think the rolling start to the day has been one of the best changes we have made recently and the feedback from parents seems to suggest they agree.

I am very conscious that I have been poor at running my Hot Chocolate Fridays over recent weeks. I apologise for this and have tried to protect this time in my diary so that I can get them up and running again. Invites will be coming home again very soon indeed!

That’s it for another week. Don’t forget the 50th Anniversary Ball on June 29th. The link for tickets is at the top of this page. I hope you have a great weekend. I am going to try and get on populating the new school website… all will be revealed soon!