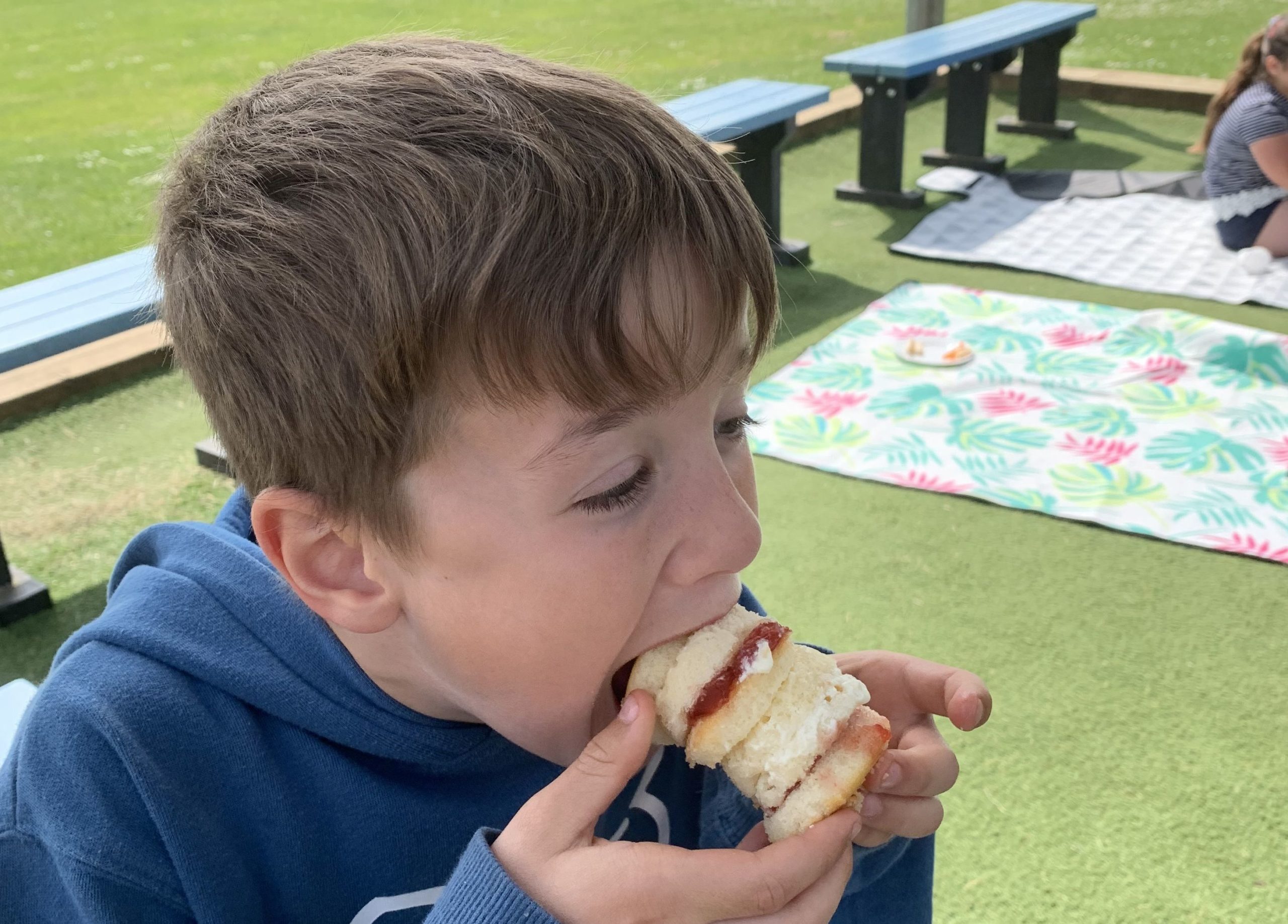 So today marks the 75th Anniversary of VE Day and despite being a bank holiday, the current situation meant that I was in school with three other members of my staff team to support pupils of some of our key workers who equally didn’t get the day off as they continue their war with coronavirus on the front line of the NHS. Before I tell you what we got up to, let’s have a look at the past week.

In general, I would probably say that it has been one of the toughest weeks as Headteacher I have had for many years. No one thing defined this feeling; more a sense of frustration with the media and endless speculation about when and how schools will reopen. That, coupled with the need to try and balance a two-year budget and back to back ‘zoom’ meetings. Anyway, the great leveller is walking into the classrooms where our keyworker pupils are busy accessing their home-learning work. That, and enjoying the opportunities to see what all our other pupils have been getting up to at home.

This week, some of the best photos and videos being sent in are from pupils in our two Year 3 classes. Mr Lord and Miss McGurk set the pupils the challenge of coming up with a ‘chain reaction’. A series of mechanical events, sequenced to run to cause a simple last ‘action’. For example, Bella got her chain reaction to pop a balloon. Others resulted in child gates being opened; kettles being switched on and mythical beasts being trapped. Maya from Mayan Class created a wonderful series of events which resulted in her dad getting soaked. I thought they were simply amazing! As one parent commented on twitter, I think this task also appealed to the parents as much as the pupils. This is of course is the perfect outcome!

There is some lovely work being posted from our Year 5 pupils and my attention has been drawn to some internationally-themed menus from Megan, Lyla and Nate. Also on the food front Ayden (Year 4) has posted pictures of some historically themed cake, using a 1945 recipe. He also put some pictures online of him making some samosas. I have to admit that I unashamedly put in a cheeky request for a few to be made for school, as I know the staff team love homemade samosas! Fingers crossed!

Mrs Bailey set her class a fun challenge of coming up with a wacky dance to Electric Avenue. Many have joined in and posted their results on their classroom page. I want to give a special mention to William (Year 6) who got particularly creative at 11 o’clock at night with dark clothes and some glow sticks. It was amazing and looked like it had been digitally created. Fantastic work, William!

Lily (Year 6) has also been creative this week with her artwork. She is such a talented artist and Mrs Bryan and I have been competing over who gets her latest creation. There is one in particular she produced the other week which both of us have our eyes on. My latest ‘Lily Original’ is a piece of window art to brighten my office. It is particularly effective in this lovely weather. Another amazing piece of art was created by Sarah (Year 3) who got an acknowledgement from author David Lucas for her drawing of Grendel.

All teachers are saying to me how impressed they have been with the speed at which the pupils have adapted to the use of Google Classroom and I would like to add that I have been impressed with the teachers. They had to go from a standing start to full speed in a matter of days and as time has progressed (seven weeks now), their confidence and creativity are to be commended. Certainly, when we do return to some form of normal, I think the digital platform will form part of the teaching process.

Looking at our twitter feed this week, there have been some more very creative posts.

Archie (Year 6) have continued with the baking and this week made some lovely looking strawberry cakes. He was joined by fellow Year 6, Izzy, who turned her offer of cooking pancakes into a bit of a maths investigation where she was looking at economics of more, smaller pancakes or fewer larger ones. Mrs Vernon joined in with the banana bread craze (as did I, with minimal success) and Helena (Year 5) went left field with her bananas and made a delicious looking banoffee pie.

On the savoury front, Eva (Year 3) made her family fajitas and Alicia (Year 4) made some lovely filo and spinach tarts. She might want to think about teaming up with Freddie B (Year 6) who has started growing his own herbs and salad leaves.

Final thing to comment on from our very busy twitter page was Bea’s (Year 5) amazing football skills as she showed Miss Gooderham how accurate her shooting was; just like Fred and Stanley (Year 5s) with the ball in the bin challenge.

So today, I made the decision that we would stay open to pupils of NHS staff and healthcare professionals, despite it being a bank holiday. Mrs Cornell, Miss Gooderham and Mr Mills Jnr were all happy to join me, with Ben, Eme, Will and Lottie. Of course, because school was officially closed, Mrs Cornell planned a series of activities based around the VE Day celebrations. The staff and pupils made food for a lunchtime picnic which included mini Victoria sponges. Ben went for height with a triple decker! Was his mouth big enough to eat it? I couldn’t possibly comment. We also had sandwiches and snacks. It was lovely to get out in the sun, have a picnic and play a few relaxing games. It culminated however in a football match with the Johnsons and me versus Mr Mills Jnr and Miss Gooderham. I think we won! All the pupils were awesome company.

The form times this week took place on Thursday, with the exception of Kahlo Class who used some free time on Wednesday afternoon. I didn’t get to join much this week due to other online meetings and phone calls, but did pop my head in on a few. It was lovely that a few more of our teaching assistants said hello to their classes this week which I know the pupils would have appreciated. All teachers have been frantically nominating their classes for Class of the Week and based on their enthusiastic feedback and what I have seen online, I will present the cup to Year 4s. Well done to Orville and Lamarr Classes. They have engaged so well this week and demonstrated creativity, increased maturity with the online platforms and really ‘gone for it’ with the challenges their teachers have set. Great work!

Next week would have been SATs week for the Year 6s. Not going to comment any further on that statement other than to say our pupils were ready and would have done brilliantly. We will be saying the very same to the secondary schools as the meetings get underway to discuss transition. Mrs Bailey and Mrs Bryan are already sending over information in anticipation of some virtual meetings.

There is one other member of staff I would like to thank in this current situation. Mr Waluk has been in most days, socially distancing himself from everyone and getting on with some significant decorating and maintenance work. It has been an ideal opportunity, and he’s done a fantastic job. Will the pupils be able to work out what’s changed when they return? There’s plenty!

This weekend could prove to be very interesting and I will of course be focused on any announcement in relation to the relaxing of the lockdown and school openings. Until then, it is simply pointless speculation. When I know something for certain, you will be the first to know. The SLT are working hard in the background, talking through different scenarios. It might well be that I invite you to participate in a parent ‘form time’ with me at some point in the future to talk through your concerns or questions. Is this something that some of you would appreciate?

The school is now quiet and so I can go and perhaps open a bottle of something cold.

Just want to commend the year 3 team – we’ve really enjoyed the spy work this week (especially their excellent video!) and of course the chain reaction machine.

And I believe there may be more film to come! 😉

Mr Mills, we have been very impressed with the daily lessons through google classroom. Home schooling isn’t always easy as I’m sure most would agree, but the structured work makes the task more straightforward. Arthur (Lamarr) in particular is jealous of Tabithas spy project (Aztecs) which says something about the inventiveness of the teaching methods!