A Pause for Thought

A Pause for Thought 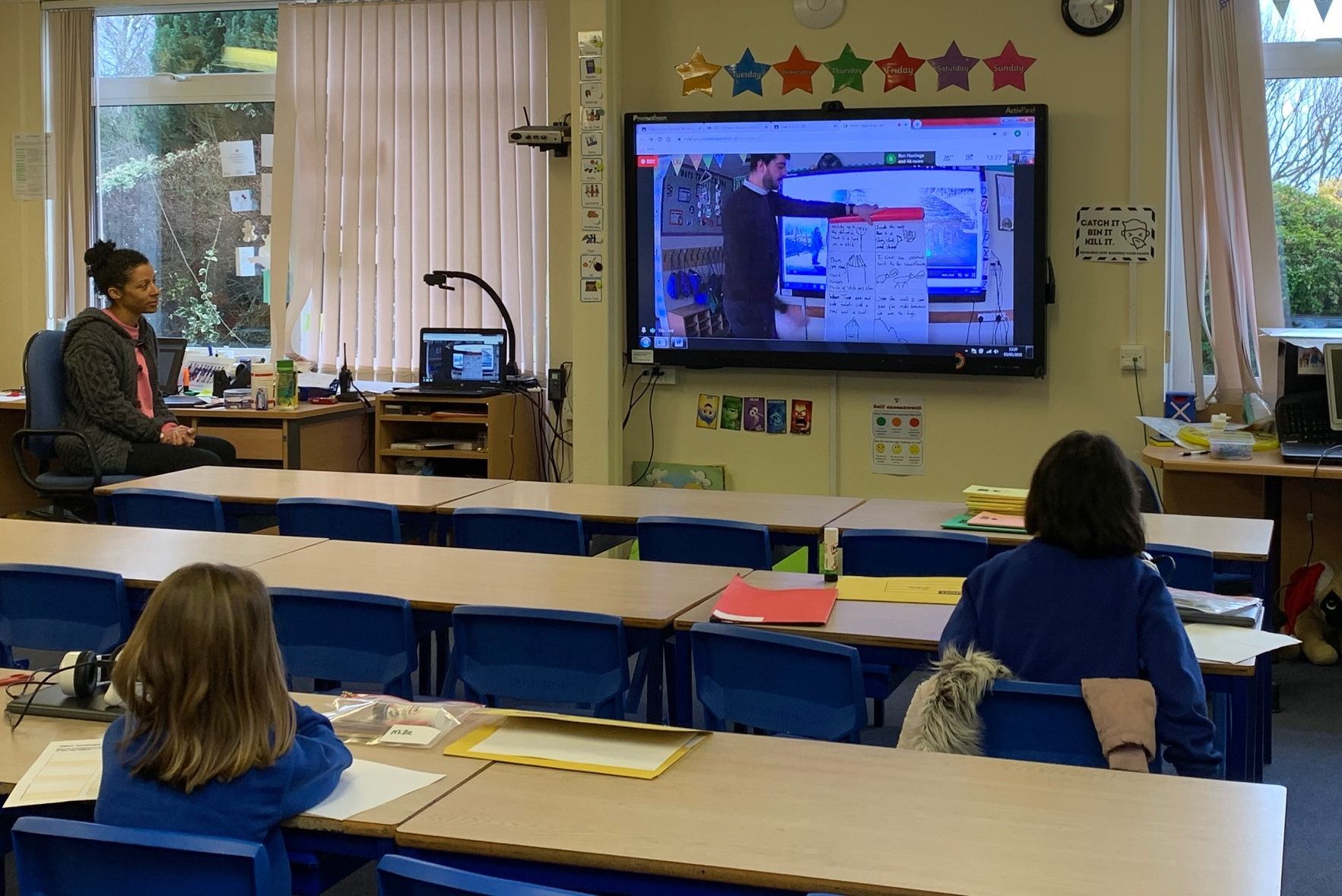 The usual format of my blogs would see me look at what I have been getting up to this week whilst reflecting on the work done by the pupils across our eight classes, not forgetting all the extra-curricular opportunities they have. This week’s blog needs to be different (for obvious reasons) and I want to reflect upon the very dynamic last five days and also give a little detail as to how we have ended up with the online provision we have.

Even before we broke up for Christmas, it was clear that the data was going in the wrong direction and there were well-publicised debates between some local authorities and the government about what was right for pupils and what was right for public safety. This gave all headteachers the ‘heads up’ to watch the figures carefully and listen closely to the daily briefings. There was a great deal of discussion about school safety in general but our track record had been very positive and the flexible measures we have had in place since March have worked. Every member of our school community has had a part to play in that and I am extremely grateful for that support.

Detailed planning for Monday’s start of term saw me meet with my leadership team regularly over the last few days of the holiday whilst talking with my staff as to what we needed to have in place from the start. Subtle adaptations were made to our risk assessments and resource planning but significant adaptations were made to the way the teachers would be teaching. We knew we would have pupils off and therefore the blended learning we had had in place for our isolating pupils in the Autumn term was set up and ready to go from the off. It was an impressive sight to see pupils both in school and at the kitchen table work collaboratively in a range of subjects. We even had Milly (Year 3 and at home) join her friends for lunch!

When, during the afternoon, the announcement was made that the Prime Minister would be making an statement at 8.00pm, it was clear it was going to be about ‘when’ and not ‘if’ he called a national lockdown and so the staff meeting scheduled for after school, to review the plans for the start of the term, needed to have its agenda tweaked.

Many of you will recall we sought feedback from parents halfway through the first lockdown, looking at what was working well; what was providing more of a challenge both from a parent’s and also a pupil’s perspective. We also spoke with staff to gain their thoughts about what worked and what barriers they faced. From that point on, we have been planning regularly and in detail for the inevitable second (full) lockdown which came into place on Monday night. I have likened it to building an emergency generator which could be switched on with little or no notice should the main power supply fail. When the announcement was made, and ‘power was lost’, the switch was ‘flicked’ and within 12 hours, we were up and running again. None of what we now have was devised over night; it required thought and consideration on the part of my entire team for many months and I think I can say with confidence we have done pretty well.

Parents, too, have played their part in making this work. You were patient whilst I drafted letters and devised Google Forms. You returned information to me in a timely manner about critical worker provision and you gathered technology from the around the house to set up mini home offices for your children.

At 10.00am on Tuesday, just 14 hours after the lockdown was confirmed, over 90% of our pupils were taking part in a live ‘form time’ with their class teachers, making notes of new classroom codes and getting ready for the first lesson. Throughout the morning, the teaching rooms were transformed from a classroom with a laptop to full-blown TV studios with cameras, screens, flipcharts, resources, decorative plants and goodness only knows what else.

22 pupils were in school, in critical worker bubbles, separate from the teachers and supported by my wonderful team of teaching assistants. All the pupils were getting the same level of engagement regardless of where they were based.

Behind the scenes, Mrs Beresford, Mrs Burniston, Mrs Small and Mrs Lanni were helping me liaise with families, sort out additional technology which we have been able to loan to pupils and get additional resources in the places they needed to be.

On day two, the engagement increased to round about 95%, with pupils taking part in live teaching and really getting to grips with the way they are going to be taught for at least the next six weeks. The teachers in each year group have paired up and take it turns to be in front of the camera with the other manning ‘the chat’ and providing that instant, reassuring pat on the back to pupils (and parents) who are struggling. It was just such an inspiring sight and one which made me so proud of every aspect of #teamwhitehill. Some pupils by now had even collected their exercise books so that work they did had value. The other books were collected across the remainder of the week.

The staff have really embraced the situation we now find ourselves in, and this alternative way of teaching. Year 4s managed to occupy three TV studios on Thursday to deliver spellings to different groups. Mr Lord and Mr Wells have (mischievously) sent home clay to every year 3 pupil in anticipation of an art lesson in a week or two’s time. On Friday afternoon, the Year 5 teachers set their pupils a 20 minute ‘Taskmaster’ type challenge to create a model of a heart.

Even Mr Miley was determined that ‘PE with Joe’ would not be the sole domain of a certain Mr Wicks, as he delivered four live PE lessons – one to each year group – on Thursday and Friday. This will be a regular feature of the pupils’ timetables and therefore look out for a whole range of creative activities that I am sure he wouldn’t mind if you joined in with. I believe cries of “mum, I need a bigger bowl” were regular occurrences as Year 3s tried to get rolled up socks into a target.

I believe I can be confident that, unlike in Lockdown 1 where I referred to education as ‘having paused’, this time around with everything we have put in place, it will certainly be full steam ahead, with pupils accessing and engaged with curriculum coverage across the majority of subjects.

Thank you so much for all the lovely tweets and emails expressing your appreciation of the work being done. It isn’t easy. It is tiring but it is amazing the impact a positive comment can have on staff morale. We have been having briefings at the end of each day and we start by sharing some of the comments sent in. I have also been collating them and sending them over late into the evening so they can reflect upon how well they have done. Please don’t stop; they all get read and they all make a difference. Equally, if we can help in any way to make your child’s experience even smoother, please do let me know. I think by now you know the many ways you can get hold of me.

As we move forward and into the first full week of our remote teaching from Monday, I will get back to a more usual blog format, celebrating the work being done and the specific successes of the pupils and their classes. I will make a point of trying to engage myself with more of the classes online; pupils will never know where I might appear. Pupils will be able to earn Headteacher’s Awards and I will make sure a digital version is available for them to print out.

I think I can say for certainty I will sleep well this weekend. It’s been an amazing week; an inspiring week; a productive week but it’s been intense and non-stop. Bring on Monday – I can’t wait!

Have a safe weekend!

Huge congratulations to you & all the staff on a wonderful achievement this week, moving pretty much seamlessly from in-person to on-line teaching & learning within a day!
The success of this has clearly been down to the foresight, planning, & sheer hard work you’ve all had to put in, rather than just reactive luck, which is a salutary lesson for our leaders I feel.
I’m sure all parents/carers are as grateful as I am that our children’s education can continue as near normally as possible, & that #teamwhitehill are so committed to their engagement & progress.

Agree. It’s great to hear my son chattering away and participating in live lessons. Although my ceiling certainly took a bashing from the live PE lesson that took place today I was thrilled you did that – and you were so creative in terms of workout equipment (have I got a tin Luke can use for PE?!). Thanks to everyone in Y6 in particular for their efforts. Much appreciated.

I think you are amazing!

Fantastic job by the whole team! Exemplar of how it’s done. Thank you!

An inspiring read… the careful planning and TeamWhitehills ‘can do’ attitude has certainly excelled itself this week. The lessons are amazing, the kids are engaged (and we can’t wait to use the homemade lacrosse sticks next week!!)
Not only am I hugely grateful that E. goes to such a good school, but I am also really pleased that he has such an amazing team of staff as role models. Thank you for all you hard work.