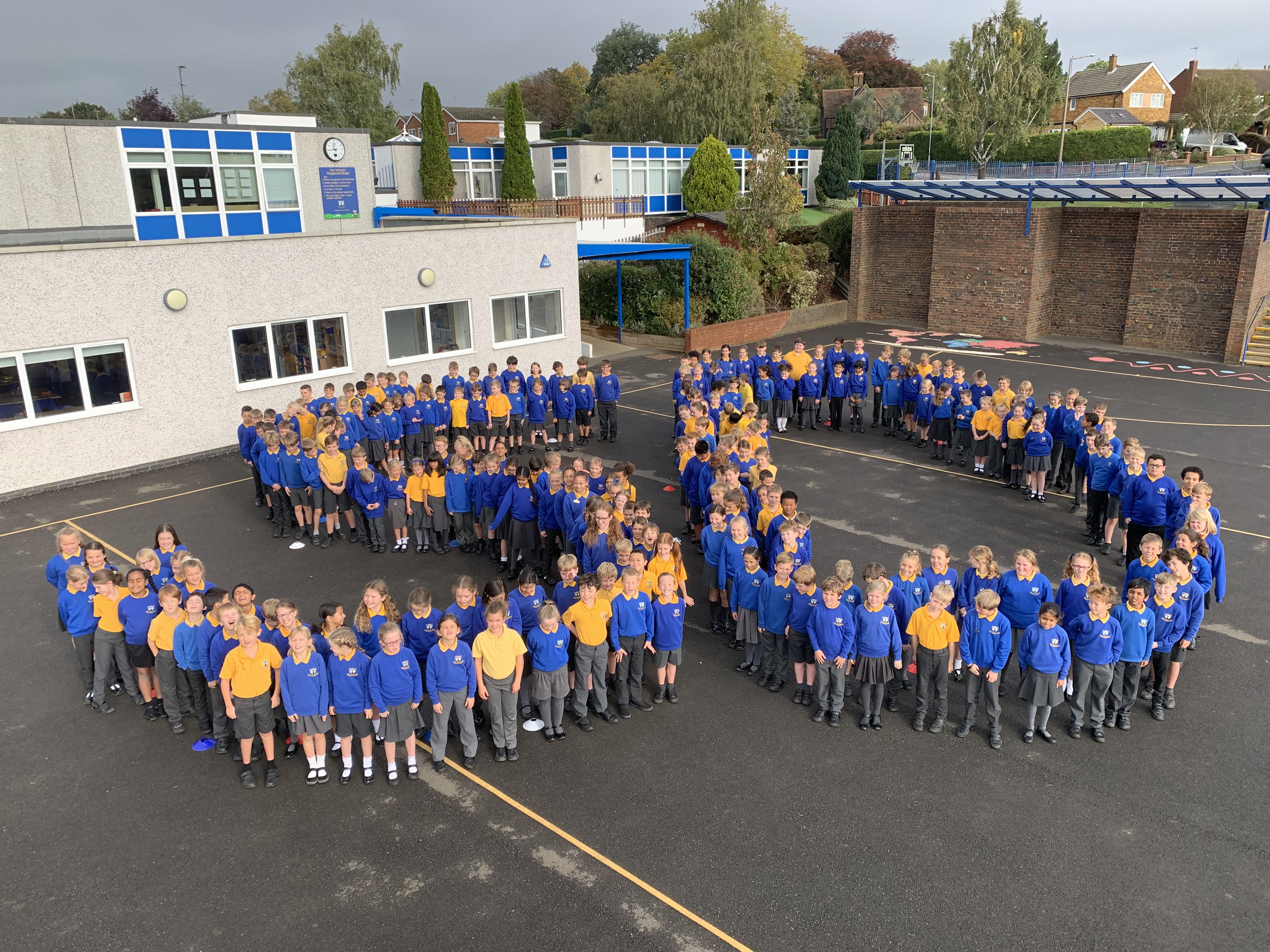 Part one saw the pupils arrange themselves (with minimal fuss) into a large number ‘50’ so that I could balance precariously at the top of a ladder and take a commemorative photograph. There was only one ‘wobble’ but I had every faith Mr Waluk would catch me should the worst have happened. I am not sure Mr Waluk felt the same! Trying to get 240 pupils to all look in the same direction with their eyes open was always going to be a challenge but the spirit of the photographs is great. I think it will be one of those pictures you can see something different in each time you look.

Mrs Stokes, herself a former Whitehill pupil, and her team presented the pupils with anniversary cakes during a special lunch and I was delighted when she was able to join us for our birthday assembly at 1.00pm. I gave a brief history of the school, showing a pre-1969 map of the area which showed the site as an old chalk pit along the side of White Hill. Our school itself was then built on this site to replace the school which is now the British Schools Museum in Queen Street, due to the expansion of the town. The other fascinating fact is that I am only the fourth Headteacher in those 50 years, having succeeded Mrs Bradshaw in 2013.

At the turn of the millennium, staff and pupils at the school buried a time capsule with the specific intention that it would be dug up again this year. After many attempts and after almost giving up, Mr Waluk, our brilliant Site Manager, found the capsule so that we could open it in front of the pupils in a special assembly. It was fascinating to see the contents which included photographs and artefacts from the time. It was particularly lovely to see pupils in photographs who still have a connection with the school as current parents or relatives. Mrs Cook has displayed the contents if you would like to come in and have a look.

What is a party without presents and cake? The final part to our celebrations saw our youngest pupil, Charlie I (Mayan Class) and our (second) oldest pupil, Adam (Kahlo Class) blow out the candles on a 50th Birthday Cake as we all sang Happy Birthday. Pupils were then presented with a commemorative journal and pencil as well as a cake to take home. Thank you for all your good wishes and words of support over the course of the week. We have decided that we will re-bury a new time capsule at some point during our 50th year with the instructions that it must be dug up in 25 years’ time, the school’s diamond anniversary.

It was, of course, business as usual for the pupils for the rest of the week which meant lots of things going on, in and out of the classroom.

On Monday pupils were either being photographed or immunised against flu. I think we managed to get the right pupils to the right place, at the right time. We did fear this logistical nightmare, but with hindsight, getting all of this disruption out of the way in one go was actually a blessing.

We had four cross country teams out on Tuesday afternoon, taking part in a district competition. It was a particularly successful afternoon, with Bethany and Yasmin (Year 6) finishing first and third respectively in their competition. Ronnie (Year 6) finished second in his and Stanley (Year 5) finished third in his. These performances, coupled with very strong performances from the other members of the teams meant all four teams finished in the top three of their competitions. Our Year 5 Boys came first overall; our Year 5 Girls came second and our two Year 6 teams both finished third. Well done to everyone who took part.

We have also had teams taking part in the district round of a national football competition this week. On Wednesday, the Girls’ Team lost out on a place in the semi-finals by means of a three-way penalty shoot-out and on Thursday, our boys lost their semi-final after progressing through their league.

Cas, from Hitchin Museum, has been busy in Whitehill this week. She worked with both Year 3 classes on a story-telling workshop as well as delivering a session on evolution to both Year 6 classes. Cas is a good friend of Whitehill and is always happy to support our projects. She is back with us next week to support the two local history walks the Year 3 classes are doing on Monday and Wednesday.

I have had two great chess matches this week during my lunchtimes. Both involved Thomas (Year 4) and his friends. I was particularly stretched by Thomas and Freddie on Thursday who really gave me a run for my money. My ability to multitask now when playing chess has ended as the pupils get better and better!

All of our achievements were celebrated as always in Achievers’ Assembly on Friday. Music was provided by Ailsa (Year 4) and Kezia (Year 6). Our class of the week was Lamarr Class (Year 4) and Air won the House Cup. We also celebrated our first two Silver Awards which were proudly displayed by Katy (Year 3) and Ashton (Year 5).

On Friday lunchtime, during Board Games Club, we welcomed Imogen J’s (Year 6) uncle, Craig White into school. Craig is the UK Champion at Rummikub. For those who don’t know, Rummikub is a cross between the card game rummy and Mah-jong. It looked very complicated but the players soon got to grips with it and were having great fun. As well as being very generous with his time, he also brought a collection of brand new board games to leave for our lunchtime club to use in the future.

Next week is the last of a very long half term and looking around, I think both staff and pupils are ready for a break. Before we get our rest, however, there are a few more things to attend to.

On Monday, we welcome Will Grill back to school. Will is the author and illustrator of a number of books we use in school, including Shackleton’s Journey. He will talk to the whole school in an assembly first thing, before running workshops for both Year 6 classes on an aspect of his work. The days are always inspirational and I am looking forward to seeing what the pupils produce under his guidance this year. I hope to be able to join one of the classes and take part.

That morning, Aztec Class (Year 3) will be taking part in a local history walk, as I have already mentioned, and on Wednesday, it will be Mayan Class who venture out.

We have our two parent consultation evenings next week, on Tuesday and Wednesday. The booking system is now closed and therefore if you forgot to make your appointment or want to check anything, please pop into the school office and we will do our best to help you. As always, I would ask you help the teachers run to time by sticking to the ten minute slot you have. Should you feel the conversations need to be developed, the teachers will be more than happy to make an additional appointment at a later date.

On Wednesday morning, our assembly will be led by Rev Henton-Pusey. He will be talking with the pupils about this year’s Shoebox Appeal and how they might like to get involved. Details were sent out earlier in the week and any contributions will be collected straight after half term.

On Thursday, we have Sports Leaders from Hitchin Girls’ School visiting us for the first time this year to start their practical work. They will be working with our two Year 3 classes. As they leave, the Year 3s will then be working with Hitchin Priory Rotary Club to plant 3000 crocuses as part of their project to eradicate polio. This is a wonderful project to be involved with and one which I look forward to seeing the results of next spring.

The final event of the week is a special Achievers’ Assembly on Friday where we will welcome local poet, John Gohorry into school to announce the winners of this year’s poetry competition. We had lots of amazing entries and I know he is working extra hard to find our winners.

That’s it for this, our birthday week. Have a great weekend!