It Must Fit Someone

It Must Fit Someone 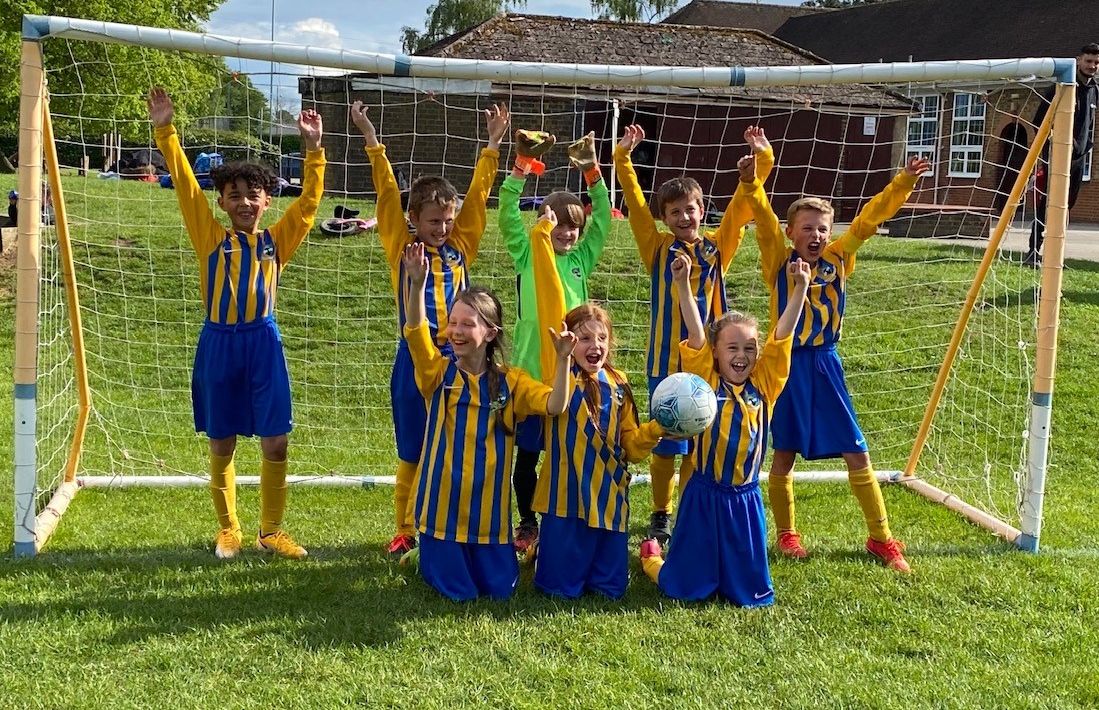 It’s been a really productive and exceptionally positive week in school and rightly so. Before I reflect on this, last Friday evening, I joined Miss Gooderham and two girls’ football teams at Wilshere Dacre for the second of three fun festivals. After some intense contract negotiation, the Year 6 team was managed by a coaching team of five – the three Mills staff members and Mr and Mrs Wells. The Year 5 team was coached by Miss G. I think I am correct in stating that a Nando’s formed part of the fee!

Anyway, it was a great evening and both teams played really well wearing kits that must fit someone, somewhere. Mr Mills Jnr quickly established himself as ‘Pep’ and took control of the Year 6s with a very fluid formation of 1, 1, 1, 1, 1, 1. Miss Mills chipped in from time to time with more technical instructions such as ‘kick it!’ Miss Gooderham deserves particular praise with the Year 5 team as she was also called upon to referee all evening as well as coach, taking control of the final game, Year 6 v Year 5. This game went all the way to a penalty shootout and when Lauren (Year 6) scored her penalty, the win was secured. Of course, the results didn’t matter (yes they did) and it was lovely to have the opportunity to play a few matches against other schools after so much sport had been cancelled over the last 15 months. Huge thanks to all the parents who supported and transported.

We were back at Wilshere Dacre on Wednesday for a Year 4 version. We had two teams taking part and despite our coaching success last week, Team Mills-Wells was replaced with Mr Miley. Not downhearted, I went along to support, along with some Year 6s who wanted to show their team spirit. Both teams played really well and demonstrated that they will be pushing for a place in the ‘A’ Team when they move into Upper School from September. Goal of the night went to Luca with a right footed shot from the left-hand touchline which went into the top right corner. I mentioned earlier about the kit fitting someone, somewhere… well it wasn’t the Year 4s! Huge thanks to the staff of Wilshere Dacre and Samuel Lucas who helped organise and run the series of three festivals over the last few weeks.

Those of you who have spoken to me on the playground over recent weeks have heard me reference the fact that I don’t believe the pupils will have suffered academically as much as the mainstream media has been reporting. Schools haven’t been closed and teachers have been working tirelessly to deliver the curriculum; couple that with the proactive attitude of the pupils and progress will have been made. This has been evidenced this week as the Year 6 pupils took a series of tests (the 2019 SATs papers to be exact) and, as one teacher reported, ‘smashed them’. There were many, many individual successes of attainment and achievement and I have enjoyed seeing the smiles on the pupils’ faces. The year group as a whole can also feel very proud as average scores in reading, writing and maths were commensurate with the cohort which actually sat these papers for real in 2019, without 15 months of disruption.

One of my tasks this week was to update the school website with calendar and term dates. I believe I have added all the known events to the school calendar and added the 2022/2023 term and holiday dates for your reference. As more and more ‘normal’ events get up and running again, I will try to ensure I add them as soon as possible, even if I need to flag them as provisional in the first instance.

I have been spending money this week too (or Mr Denney has) and we have taken delivery of 20 new PCs to replace those in the library/computer suite. We have gone for micro-pcs which are tiny (smaller than the external hard-drive in my office) and should create so much more space for the pupils. I’ll share some photos as the room takes shape.

I have also invested in two digital resources to make the teachers’ (and my) life a little easier. The first is an extension to the assessment platform we use which will allow us to set up and track progress against our curricula objectives in all subjects. It will also allow easier collaboration between teachers as pupils move through the school. The other is a digital platform to support the school’s safeguarding work. Whilst our practice is already robust, digitalising the reporting and record keeping in school will ensure nothing gets missed and sharing of information becomes easier.

Mr Denney was out on Wednesday on a science course. A real life, non-virtual, science course! It was based at Hudnall Park; a Hertfordshire base for outdoor learning we have taken pupils too previously. Mr Denney felt it was an extremely valuable day and tied in perfectly with the work he is doing as we look to renew our Primary Science Quality Mark. He sent me several messages throughout the day which all tended to include a shopping list!

Although the weather has hardly been conducive to cricket, pupils have been practising their skills in both games lessons and as part of our extra-curricular provision. It’s a summer sport and I so hope that summer will realise this soon and make an appearance.

Year 3 pupils from Aztec Class have transferred their beans, which they had been growing as part of their science work, to the gardens outside. I think they realised they needed to do this once they saw they had reached the ceiling of the classrooms. Several pupils were needed to transport each plant. Thank you to Chloe (Year 5) and Miss Henry for helping with the planting.

We had another enjoyable Achievers’ Assembly on Friday morning, which started with music by Molly (Year 6) who played the piano for us. Year 3 were in the hall with me as the other classes watched on the big screen. We celebrated a number of new house point certificates which contributed to Earth House winning the House Cup. The Wombles travelled to Wilde Class and Mayan Class won Class of the Week which is becoming more and more competitive each week.

Next week is going to be fantastic! I state that now before it has even happened, knowing that we are taking three year groups on residential visits. First to depart school, early on Monday, are the Year 6s who are off to the Isle of Wight. They will be there for five days and take part in a variety of different adventurous and beach-based activities. Shortly after they leave, Year 5 will be heading in the opposite direction to Norfolk and a base in Overstrand. This trip has been carried forward from last year when they were Year 4s and the visit was postponed. On Wednesday morning, the Year 4 pupils board the coach to Overstrand too, for their planned residential. As the Year 5s won’t be back until the end of the day (they come back on the same coach taking the year 4s), it does mean it will only be the Year 3s and a small group of Year 6s in school that day. That will be strange… not quiet… just different.

I am so glad we are able to run these trips and am extremely grateful to the staff who are organising them. All I hope for now, is some slightly warmer (and drier) weather but I don’t even think this will dampen spirits. Keep an eye on the respective twitter feeds if your child is on one of these trips. You will need to ‘apply’ to follow in the usual way.

For the group of Year 6 pupils who are not heading away, we have a fun-filled week ‘back at the ranch’. Mrs Vernon and Mrs Beresford have been planning a series of activities and trips, including a visit to Fabio’s, I believe! Having not been invited to any of the residential trips, I wonder if I might be able to get an ice-cream? I’ll let you know!

Once all the pupils have returned from their respective visits – the Year 6s being last to return – the half term holiday begins and I am sure there will be many who will be catching up on their sleep.

That’s it for the week. Make sure the suitcases get packed and please, please make sure EVERYTHING is named!