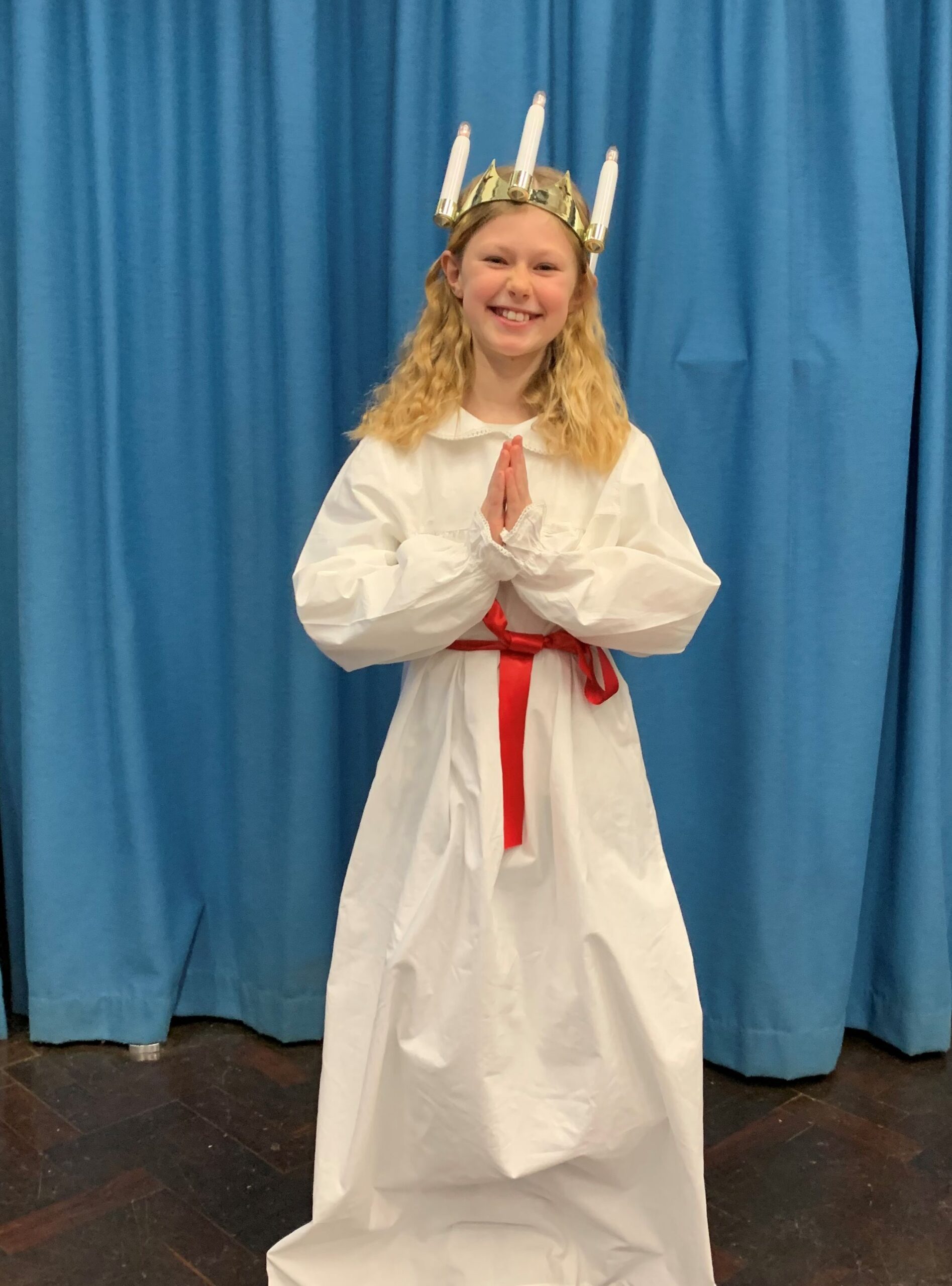 I don’t feel I have spent much time in my office this week which highlights the fact that it has been a super-productive week around the school. Not only have we enjoyed a few seasonal events, but the pupils have been engaged in some wonderfully creative and inspiring learning opportunities across all aspects of the curriculum.

On Monday, I spent time in both Year 5 classes as they were engaged in some space-themed lessons. Pupils in Voyager Class were working in groups to decide which six items (out of a long list) they would take if they were setting off on a mission to Mars. More important than the ‘what’ was the ‘why’ and all of the groups I spoke with gave really good justification for the items they chose. I was particularly interested in the idea from one group that a mobile phone would be taken. I did try and put them off by saying I struggle to get a signal in parts of Hitchin, let alone in space, but given the planned mission was in 2030, the groups informed me that there would probably be telecommunication satellites orbiting Mars by then. Fair point!

Apollo Class were creating fruit smoothies from a range of ingredients which I believe they had used to replicate the comparative sizes of the planets in our solar system. I couldn’t find a group which were tempted to add peas to their drinks but some certainly went overboard with the grapefruit! I was also interested in Spencer’s smoothie; or was until I realised what he was actually saying rather than what I thought he had said. I could swear he told me he had added sherry to the drink, however it turned out to be cherries!

On Monday afternoon, it was the turn of the Year 3s to join me for the Millsy Monday assembly. I demonstrated the effect of unkind words this week and asked whether the rhyme, ‘sticks and stones’ is correct. I will be having a similar discussion over the coming weeks with the other year groups. As a treat, Adelaide played her guitar for us. Adelaide has only been learning since September and so to play two pieces in front of an audience so soon is wonderful. She has promised to play in an Achievers’ Assembly in the Spring Term.

Our Year 4 pupils were captivated by their science work this week. Both Orville and Lamarr classes have been investigating owl pellets; the regurgitated, undigested food coughed up. Sounds lovely! As they started to pick the pellets apart, and carefully clean what they found, they discovered a whole range of miniature bones belonging to voles, bats and other strigiform treats. The pupils were given a diagram of a vole skeleton and most groups were able to find nearly a complete animal in their pellet. As I am sure you can imagine, it prompted great discussion and certainly provided a ‘wow’ moment in their topic.

The pupils and staff enjoyed Christmas lunch on Wednesday. Adaptations were made to allow for four sittings for our four bubbles but it was a very festive and enjoyable affair. Huge thanks to Mrs Stokes and her team for preparing and serving over 260 meals in just under two hours. Several staff members have commented to me that they thought it was the ‘best yet’ and I certainly wouldn’t argue with them. We even had one pupil, who was having to isolate, join his class at the dining room table via Google Meet where he chatted with his friends and joined in the fun.

Anthony Glenn returned to school on Thursday morning as the school’s treat to the pupils. This year, he performed, with the help of some very talented pupils, Oliver Twist… twice! Show one had the Year 5 pupils as the live audience; a treat for having already had quite a few year-group specific events cancelled or postponed. We also ‘broadcast’ this performance around the school so the pupils in Year 3 and Year 4 could watch it. The second performance was for the Year 6 pupils to watch live. Today was another example of ‘making things work’ as Anthony had two sets of props and two sets of costumes so that we kept the pupils and himself as safe as possible. It was very impressive to watch. As always, the pupils had a fantastic time with his laugh-a-minute performances. I must also say I was impressed with Lewis (Year 5) and Jamie (Year 6) who took on the role of Oliver in their respective shows. Mrs Bailey should also get a mention for playing the part of Mr Brownlow with particular skill; the onion was very well peeled!

We hope to have Anthony back in the Summer Term with one of his Shakespeare performances and have already booked him for next Christmas. Hopefully both will see all four year groups in the hall together.

Our Year 3 pupils have been as busy as ever this week. They enjoyed a Stone Age workshop at the beginning of the week where they got to handle a whole host of different artefacts. I saw some amazing Stonehenge inspired artwork in Aztec Class. I also joined Aztec Class for their weekly tables challenge where I had to answer 60 questions as quickly as possible. I was determined to beat Bisma who is a whizz at these and was quite pleased with my time of 57 seconds.

Isla (Year 3) entertained the pupils with her piano playing at the start and end of this week’s Achievers’ Assembly on Friday morning. Sisters, Libby (Year 3) and Ellie (Year 5) were presented with their music exam certificates having both passed with merit.

The House Cup went to Earth House and the Class of the Week went to Apollo Class, although it was extremely close this week. It could easily have been presented to any of the classes as, despite being tired, the pupils have continued to impress their teachers with a first class attitude to learning. This week’s recipients of the Womble Award were Mayan Class and a special sports award went to Aztec Class for their scores in Activity Afternoons across the whole term.

The second half of the assembly was given over to Lilly (Year 5) and her friends, Ruby and Chantel. Being from Sweden, Lilly shared the tradition of celebrating St Lucia day (usually 13th December, which also happens to be Mr Mills Jnr’s birthday!). She dressed in a traditional outfit and told the story of why and how Swedish families mark this special day. She then handed out cinnamon biscuits to every class. Thank you Lilly for sharing this with us; a lovely thing to do as we approach the Christmas break.

Before we look ahead to the last week of the term and the last school week of 2020, I would like to thank one of our Whitehill volunteers and friend of the school, who has made a donation towards the cost of running our early morning provision. It is very much appreciated and will certainly help.

On Tuesday, we have the launch of the Year 3 films. You should all have received a letter about these films which have been made this year as there wasn’t the opportunity to have our traditional productions. We have sent it to everyone as a bit of Christmas cheer in these challenging times. I will send out the link to the films which will be on the school website as soon as they are live. You will need the password to view them and this was shared on the aforementioned letter. Please keep this password within the Whitehill community. We would usually have held a charity collection at the end of the productions and so in its place, Mrs Cook has opened up a School Gateway option should you still wish to make a donation. The charity we have chosen this year is Hitchin Foodbank.

There is a day of sport on Thursday and each class will have a chance to participate at some point during the day.

On Friday, we will have our final Achievers’ Assembly of the term in which some of the Year 6s will be helping me celebrate the end of a very ‘interesting’ year.

As a reminder, school will finish at 1.10pm for Lower School and 1.15pm for Upper School on Friday. If pupils attend Cookie Club, I believe they have already been in touch about their hours for this last day of term.

Finally, can I thank you for the lovely emails you have been sending in, thanking #teamwhitehill for its work this year. All are shared with the staff and I guarantee, they do raise a smile and make a difference.