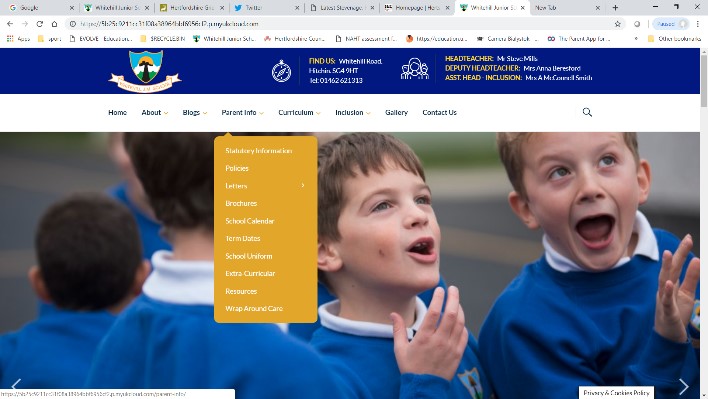 What a week! Hectic, challenging but as productive as ever. Where shall I start?

Perhaps the most appropriate place to start is (hopefully) with the platform you have used to access this week’s blog. I am hoping our new website has now gone live and you are reading this blog in its new format. I have no doubt there will be teething troubles but I hope you will all agree, it is considerably more ‘user friendly’ and better to look at. A website which is far more ‘Whitehill’. I would love to hear your thoughts and if there is anything else you would like to see, please feel free to chat to me when you see me around school. You should notice that you also have the ability to leave comments on this blog.

On Monday afternoon, our Year 6 pupils headed over to Priory School to watch a performance of Sister Act, The Musical. They had a great time and enjoyed the high standard of production we have come to expect from pupils at this school. Several of our current Year 6s will be heading to The Priory in September as they transfer to the next phase of their education. Perhaps when we return to watch their next show we will see some of the pupils who were watching this time around.

Many members of staff have been locked in meetings for three days this week. Mrs Beresford, Mrs McConnell Smith, Mrs Bryan and the other class teachers have taken part in pupil progress meetings this week. These are meetings which give everyone a chance to talk about their classes; about the progress the pupils are making and what else might be done to support them. They are labour intensive but exceptionally valuable and timetabled to take place just before parent consultation evenings.

Unfortunately, I was unable to join our Year 4s on Tuesday for their joint class assembly. Mrs Small acted as my eyes and ears and was very complimentary when we chatted later. I think one of the parents who attended summed it up perfectly on twitter when she said, ‘A brilliant assembly! Well done! Who knew rocks could be so much fun?’ Thank you to everyone who came along and supported this awesome cohort!

We were joined by the staff from Highbury Infants on Tuesday after school so that we could refresh our training on anaphylaxis and the use of ‘epipens’. Delivered by School Health, this annual training ensures that all staff at both schools are aware of how to deal with pupils or staff should they have an allergic reaction whilst in school.

I was out at an Eastern Region NAHT meeting on Thursday morning where one of the main topics of conversation was the ongoing Ofsted Framework consultation. There are some interesting ideas and developments in the proposals for September 2019, although there are also some concerns which we hope will be resolved when the results of the consultation are analysed. We shall see. I also spoke to our governors about the proposals at our termly meeting on Thursday evening.

Whilst I was homeless (the pupil progress meetings were in my office), I was able to visit classrooms and see the pupils at work. Apparently I have upset Mr Mills Junior by answering Jude’s (Year 6) question regarding my son’s monetary value with £4.37! They were, I am told, discussing the Easter Story and were working out the modern day equivalent of ’30 silver pieces’.

We had a few sporting events taking place this week. On Thursday afternoon, our Football ‘B’ Team took part in their end of season rally and did very well, making it through to the semi-finals. Well done to the team and thank you to the parents who supported and also kept me updated via twitter! After School, we had two netball teams playing matches against Wilshere Dacre School. It was a lovely evening and armed with a cup of coffee, I managed to get outside to see most of both games. All of our sporting events this week were celebrated in Friday’s Achievers’ Assembly.

Music for this assembly was provided by Bethany (Year 5) and Emma (Year 6), both of whom were very impressive. Our Class of the Week was 4AL and Air won the House Cup. It was the time of the year where we also celebrated our Wall of Fame awards and 24 pupils received their certificates highlighting the reasons why they had been chosen. If your child was selected this time around, make sure you have a look at their work when you visit for the parent consultation evenings.

Straight after our assembly I spent time in 4AL whilst Mrs Burniston attended a meeting. Our Year 4s are great and I had a thoroughly enjoyable time. This was my second encounter with this class this week, as I was also invited to play football with them on Wednesday lunchtime. I managed to score one goal! We have some very talented footballers in Year 4 as I mentioned last week.

It was a special Hot Chocolate Friday this week as I invited Alana (Year 3) and 11 of her friends as they had earlier presented me with a petition asking for answers as to why they weren’t allowed to dress up on World Book Day. It was a very interesting discussion and I hope I have reassured them that we celebrate reading every day and not just once a year via a fancy dress day. It is so important, however, that pupils feel they have a voice and feel listened to.

That’s about it for this week and so let’s have a look at what we have in the diary for the penultimate week of the term.

Tomorrow, it is the turn of our Football ‘A’ Team to take part in their end of season rally. Thank you in advance to the players, parents and staff.

The Year 4s have planned their Roman Day for Monday. Observant readers may have noticed the second edition of last week’s blog removed the sentence suggesting this themed day might have been this week. Because of their assembly, they decided to postpone the day until this coming week. I have no doubt they will be able to come up with many answers to the well-known question, ‘What have the Romans ever done for us?’

I am aiming to be at Mrs McConnell Smith’s new initiative, ‘Tea and Targets’ on Monday afternoon at Highbury Infants. It is an informal coffee afternoon for parents of pupils with SEND so that they can come together, chat about our provision and ask any questions they might have about their children.

Mr Weir, one of our governors is coming into school on Wednesday morning to spend time with me and also in a couple of classes to see what goes on. This part of a governor’s role is imperative and I am grateful to governors, who are all volunteers, for giving up their time to engage with the school.

On Thursday morning we have our woodwind assembly for parents of pupils in Year 5 where they will show just how much they have learned with the amazing Mr Brunton. The assembly starts at 9.00am and I hope you are able to join us. Talking of Mr Brunton, I have my ticket for Saturday evening to enjoy the latest concert by Hitchin Chamber Orchestra which features Mr Brunton playing Glazunov’s Saxophone Concerto. It is going to be amazing!

The rest of my diary for Thursday looks a little messy and I am still not 100% sure what I will be doing. I am triple booked and need to try and resolve these conflicts as painlessly as possible.

I am out of school on Friday with the rest of my Leadership Team as we have our Spring Term strategic planning day. The main topic of conversation will be our assessment and marking development work as well as this coming year’s budget and initial staffing discussions. They are always very productive but more often than not we leave with a headache! I hope the headache is not too severe this time as I am heading off to a quiz night with Mrs Draper later that evening.

That’s your lot for another week. Fingers crossed it has all uploaded successfully and if you have read this statement, the answer must be ‘it has’. I’m off to have a play on the new website.