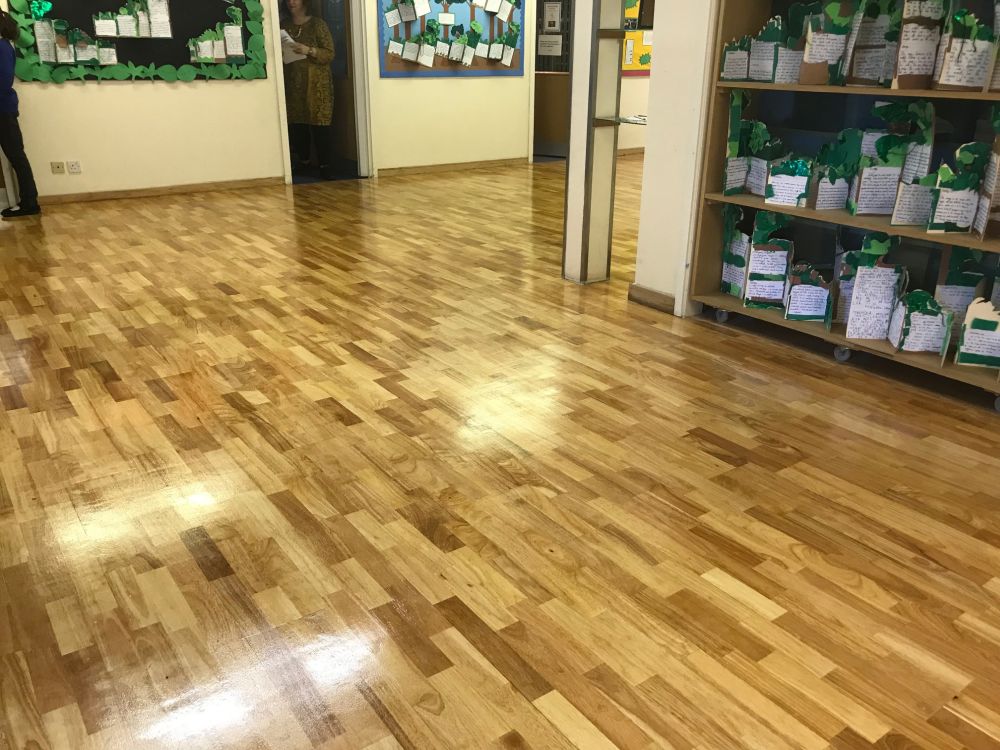 Welcome back after the Easter Break to my first blog of the Summer Term. A Summer Term which sees only one five-day week until half term. We are certainly hurtling towards the end of this academic year.

The Easter break for me involved some time with my family, including a trip into London to see one of my favourite musicals, Hamilton, as well as some time in school as we had our new server installed and commissioned; the dining room floor sanded and varnished to look amazing and the playground markings jet-washed! It has been a very productive two weeks.

It was lovely to welcome back the pupils on Tuesday as they arrived in the playground and I have been catching up with their adventures over the course of the week. I have no doubt I will hear lots more as I am out and about at lunchtimes, in between my football matches with Thomas (Year 3) and his peers. (We lost to the Year 4s on Tuesday!)

I have been locked in my office for most of Wednesday and Thursday in a variety of meetings, ranging in themes including boilers, budgets and brochures. Some of these were relatively straight forward but others did challenge and provide interesting talking points, especially the budget themed debates. I am close to setting next year’s budget now and as is widely reported in the press, it is becoming increasingly more difficult to balance the books. More about that later.

After school on Wednesday we had a team of archers take part in a Sports Partnership competition at The Priory School. Miss Gooderham took Daniel, Abhay, Presley and Ryan and they had a fun evening. Although the team didn’t win overall, we did have one winner, with Miss Gooderham winning the staff challenge. The team and also Miss Gooderham were recognised in Achievers’ Assembly this morning. Well done, all!

The main event for the pupils this week was probably the discos on Thursday evening. Thank you to the Friends’ Association for organising and running the event and thank you also to the team of parents who came along to try and regulate the amount of sugar being consumed. The pupils clearly had a good time and I am always impressed with the fact they know all the words and moves to the music being played. That being said, as the evidence proved, so did Mr Denney, although I believe that was one particular track! I wonder if this will make an appearance on the Year 4 School Journey. I better get practising.

The next big Friends’ event is the circus on 15th June. Tickets are now on sale and information has been sent out already. If you have any questions, please feel free to pop in and chat to Mrs Lanni and Mrs Cook in the school office.

Talking of School Journeys, these will soon be upon us and last night Mr Denney and I set up two new twitter accounts which will be dedicated to the Year 4 and Year 6 trips. Details of these will be sent home shortly so that parents of pupils in these two year groups can start following and get the daily updates. The decision to separate the accounts for these events came as a direct response to feedback from parents and I hope you will find this useful.

Charlie P (Year 6) and Sam (Year 6) provided our music for this morning’s assembly on the ukulele and the flute. As well as celebrating the archery, we also said ‘well done’ to Izzy (Year 6) for her continued success with Team Luton Swimming Club and made much of the fantastic efforts of so many pupils recently as they raise money in their own unique way for the ongoing Super Seraph campaign. Ruby C (Year 3) was presented with a gymnastics certificate and without hesitation demonstrated a round-off in front of the whole school. 4GD won the first Class of the Week of the term and it was double success for Mr Denney as Air won the House Cup.

This afternoon, we welcomed our local MP, Bim Afolami into school to meet with me as both Headteacher and also President of the Herts NAHT. It was a valuable meeting and provided me and Mrs Beresford with time to talk through key concerns with regards to school funding, the curriculum and also the much reported SATs debate. Despite having a focused agenda, I was also able to take Mr Afolami around the school to see the pupils in action.

I am on my travels over the weekend as we take my daughter back to Bangor University, although I still hope to pop into school first thing to see the start of the ‘A’ Team netball rally. We wish the team all the very best and I look forward to the updates.

Looking ahead to next week, the Year 6s step up their preparations for the end of Key Stage tests (in a relaxed and supportive way). On Wednesday afternoon, it is the turn of the netball ‘B’ Team to take part in their rally and again, we wish them all the very best.

It is another four-day week as we are closed for INSET on Thursday due to the fact we are a polling station. I have warned you of the potential second election day on 23rd May, but I am afraid we still don’t know for sure if these European elections are taking place.

I drew your attention at the start of the week to the non-uniform day for Super Seraph taking place next Friday. I am unfortunately not going to be around to join in as I have to head up to Telford for three days of NAHT annual conference. I will therefore resist the temptation to dress as a super hero as suggested by Freddie B’s (Year 5) mother as I am not sure fancy dress is appropriate for meeting Damian Hinds!

I don’t usually look further ahead than one week in my blogs but given the short and disrupted half term, I will draw your attention to a few other key dates to look out for.

On Monday 6th May, we are closed for the bank holiday and after school on the Tuesday and Wednesday that week we have the final parent meetings for the Year 6 and Year 4 residentials, respectively. Also that week, on Wednesday 8th, Year 3s are out on a visit to Shepreth Zoo.

Week commencing 13th May is the only five day week this half term and this is Year 6 SATs week. The following week, commencing 20th May, we have the Year 6 Residential and the Year 4 Residential as well as a few other exciting events for the Year 3 and Year 5 pupils who will be ‘back at the ranch’.

That’s it for this week and at the risk of being boring (as Mrs Cook and Mrs Lanni suggested) I will give one more ‘shout out’ for the dining room floor – hence the reason for this week’s cover photo.