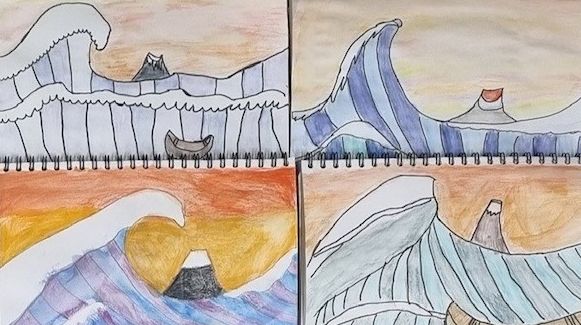 Was I glad to see Mr Waluk again on Monday morning! He might have only been away for a week but to see him back in his office as I arrived and then out again looking after the crossing meant that I could spend time in my office and catching up. It also meant I could relax a little more with pupils using the crossing. I didn’t realise just how little notice some cars take of pupils standing waiting to cross if there isn’t a man in a bright yellow coat with a large stick. I was impressed, however, with how sensible the pupils were and how they kept themselves safe. Thank you to those parents who supervised the crossing of other children whilst crossing with their own.

Anyway, his assessment of my cleaning and caretaking abilities is not printable, particularly after he saw the state I left his office. I did try… honest! I don’t think he will want to be off again any time soon.

My assembly on Monday certainly caused a lot of discussion in the classes. Bearing in mind I was in my office presenting virtually, I could hear some of the classes from their rooms as I challenged them to think about the ‘rules for friendship’ I had come up with. Deliberately being controversial, I wanted the pupils to grasp the concept that ‘being friendly’ actually has very few rules at all and judging by the feedback, I think the pupils got it.

Students from Hitchin Girls’ School visited on Monday afternoon with one of their language teachers to work with our Year 5 pupils on a Spanish taster session. It was, by the sound of it, very enjoyable and the students did very well. As part of Project Polyglot, more students returned the following day, including some former Whitehill pupils, to deliver a similar session with Year 6s. They will return later in the year to deliver follow-up sessions.

Who would have thought you could have had so much fun from a stone. Having had a bit of creative fun with them last week, this week pupils in Year 4 were using them in their science lessons, comparing and contrasting their properties.

I visited Aztec Class at one point on Monday afternoon and was very glad I did. I observed the pupils beginning to create some stop motion animations as part of their computing lesson. Later that afternoon, Teddy and Connor were sent to me for well-deserved Headteacher Awards for going beyond what was asked and producing a lovely little film of a footballer scoring a goal.

Aztec Class have been particularly productive this week and I have had lots of conversations with many pupils. A group of mathematicians came and showed me their work on arrays in maths and from this, and the way they had clearly understood the concept, I was able to introduce the idea of a square number to them. By the time they get into Year 6, there will be no stopping them!

Looking back at my diary, there are just the two meetings listed for Wednesday – both online and both reasonably short. I am therefore slightly confused as to why it felt so busy. Clearly my age is catching up with me and my memory isn’t quite what it was!

All four of our lower school classes joined a virtual meeting with the illustrator of the Gruffalo, Axel Scheffler this week. They learned about his work and had a go at creating some miniature books themselves. Mrs Vernon, who works so hard to keep our library looking as good as it does and who got our classes involved with this session, was very impressed with the work the pupils did.

It has been good to see so many pupils taking part in extra-curricular activities this week. The weather, although cold, has been dry and that has meant that all our sports clubs could happen in full. The start of lunch is a logistical nightmare trying to ensure all the pupils can get their lunch; eat in their year groups and then get out in time. One thing I did enjoy whilst running lunch on Wednesday was the ability to open the windows overlooking the hall so we could listen to the choir rehearsing once again. Miss McGurk has been given the date for the rearranged O2 concert and so it is all systems go.

Despite the absence of ‘cheesy balls’ this week for Maths with Munchies, I did go again and help out. This club is such good fun and I really enjoy posing challenges for a group of enthusiastic pupils. One such challenge that I gave Ed (Year 5) for a spot of additional brain fun was to try and divide a square up into acute angled triangles. At the moment he hasn’t managed it and so I throw the challenge open to any of you – adults or pupils. If you can send in a solution (there isn’t just one) I might award a prize. Just draw a square and then draw lines to divide the square up so that all the internal shapes are triangles with all angles less than 90o. As Sophia (Year 5) often greets me each morning with a trivia question to test my knowledge, I think she should certainly have a go at this challenge!

I spent some of Thursday morning catching up with admin for my NAHT work. Despite not being halfway through the academic year, I was also spending time starting to put plans in place for next year already. It really is like painting the Forth Road Bridge!

After school, I attended some child protection training on the Everyone’s Invited agenda. Provided by our county Safeguarding Partnership, these regular updates ensure that we maintain a culture of safeguarding throughout the school.

With Mr Waluk returning, the Wombles were once again awarded to a class during our Achievers’ Assembly on Friday morning. For the next seven days, they will be residing in Orville Class. As the Year 4s came into the hall, and the other classes joined online, the music this week was provided by Eddie (Year 6) who played the piano, stepping in at the last minute (again). The Class of the Week trophy was presented to Apollo and Water won the House Cup.

Looking ahead to next week, my assembly on Monday morning will be taken over (in part) by Edward A (Year 6) as he talks to the school about the Eco Flag Award the school is working towards. Phase are in for the Year 6s in the afternoon and I am heading out to the University of Bedfordshire to work with some third year BEd students. It is going to be so good to actually work in person with them again – the first time in nearly three years.

The Year 5s are in for a treat on Tuesday as Mr Goldring – a science teacher from Hitchin Girls’ School – visits to lead a practical session as part of their current topic.

I mentioned earlier the number of clubs running again and next week, sees the start of fixtures against other schools. I have updated the calendar on the school website with as much information as we have at the moment so you will be able to see how busy our teams will be over the coming weeks. Huge thanks to Miss Gooderham and her team for arranging and running all these opportunities.

I am looking forward to Wednesday afternoon as Mrs Bradshaw – my predecessor – will be visiting for coffee. It will be lovely to chat with her again about all the amazing things the pupils are doing. Of course, it won’t be a complete surprise as Mrs Bradshaw has family at the school in the form of staff and pupils and I have no doubt she is kept up to date about all the ‘goings on’ at Whitehill.

Before I finish, thank you for your patience as we transfer the payments over to out new system. We are nearly there and the office will be in touch very soon to confirm all is well and you can use the system again.

That’s it for now. My weekend will be taken up with looking after my convalescing wife! And yes, she does have a bell which she rings to get my attention. Wish me luck!