The Heart of the School

The Heart of the School 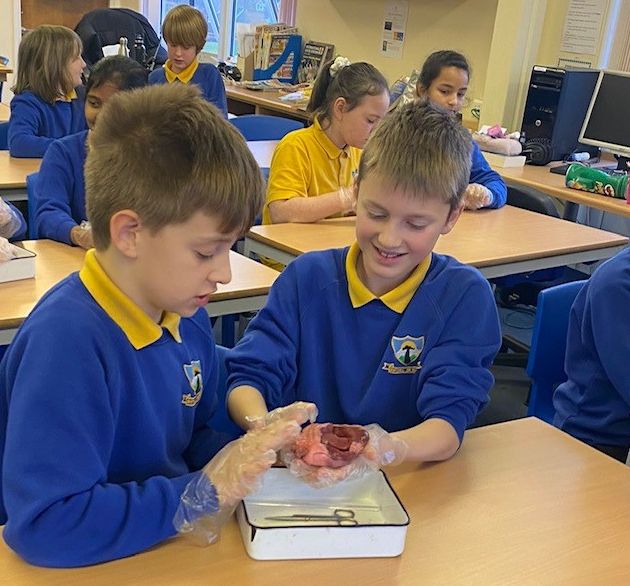 I have had an incredible week and have thoroughly enjoyed seeing the work produced across all four year groups. I champion, and am particularly proud of, our creative curriculum and the topic based approach we take and this week has highlighted the benefits of this. I have seen history, science, art, English, maths, PE and been blown away by the quality and understanding on display. Just wow!

Edward A (Year 6), one of my Junior Leadership Team, took over my assembly on Monday morning looking to recruit one pupil from each class to join him on his Eco Flag project. Mr Lord (amongst others) will be working with the team on developing their action plan and then putting aspects of this in place over the coming months. As a school, we are already taking a proactive approach in this area and so I am looking forward to seeing what the team come up with. One thing they have asked me to share with you all is this weekend’s RSPB Big Garden Bird Watch.

The team from Phase returned to the school on Monday afternoon to work with our Year 6s but before they headed into Kahlo Class to begin their work, Miss McGurk was talking with one of their team with a view to coming in to work with our Year 5s as part of their RE work. Apollo Class have been digging deep, trying to come up with answers to some ‘ultimate questions’ and they have decided to reach out for some expert advice. I think they are close to agreeing a date!

I headed over to the University of Bedfordshire on Monday afternoon, for the first time in over two years, to support their undergraduates. Year 3 students will soon be applying for their first teaching posts and I was helping them with interview technique. It was wonderful to be able to visit in person again.

Both Year 5 classes had a practical science session with Mr Goldring from Hitchin Girls’ School on Tuesday. Last term he supported Year 6 with a physics lesson and this time around it was biology. I visited both classes on a number of occasions to observe the lesson on the heart which included the opportunity for pupils to take part in a dissection. I think it took some getting used to for a few pupils but the majority were able to embrace the task and explore the structure and function of this major organ. I have no doubt there is the strong possibility that we have some future surgeons amongst these pupils, looking at the skill and precision with which they completed the task. I should also probably add that we might also have some future butchers!

After school Miss Gooderham took a football team to St Andrew’s for the first fixture of 2022. With the days remaining lighter for longer again, fixtures can start up and I have no doubt there will be plenty over the coming months. There was plenty of enthusiasm on display on Tuesday and although we didn’t get the win, it was a great team effort. On Wednesday, there were two more matches, this time at home, against St Mary’s. The boys’ team put in a very strong performance and won 5-1 and although the girls’ team tried equally as hard they couldn’t quite get the win.

Both Year 3 classes immersed themselves in a day of history on Wednesday. There were some incredible practical activities across the day and the opportunity towards the end to share their learning with each other. A key point with this type of day is that it is easy to overlook the point of ‘fun’ activities and miss the learning. This was not the case with Mayan and Aztec Class, however, who were able to articulate clearly what they had learned from what they had done. It was probably one of the best examples of an immersive day that I have seen for some time and credit must be given to the teaching team for some carefully crafted, cross-curricular tasks.

I had several visitors throughout the day including coffee with my predecessor, Mrs Bradshaw, who was able to pop in and catch up with me again. I am in my ninth year as Head at Whitehill and so it has been some time since she was in charge but I was extremely proud to be able to show her what we have been doing. Of course, despite the passage of time, with Mrs Bradshaw’s two granddaughters attending Whitehill, I am sure she is kept up to speed.

With a scheduled meeting on Friday, Biscuits with the Boss was moved to Thursday this week and I enjoyed chatting with a group of Year 4s.

There has been some amazing artwork produced this week and Year 6 pupils from Kahlo Class can feel exceptionally proud with what they have achieved. Mrs Bailey has been sharing images of the work inspired by the unit of work on Macbeth; some in the style of Francis Bacon and others, a vision interpretation of the text. They were all simply amazing!

I have long thought we should have a defibrillator in school – of course hoping we never have to use it. I was delighted, therefore, when this wish came true and we were able to take delivery of, and register our defibrillator on Thursday. Whilst this will not be completely accessible to the community 24/7, the fact that it has been registered, means that should it be needed in or around Whitehill when we are open, the relevant authorities will know where to send for it. I also have to thank a member of staff for a very kind charitable donation to cover the cost.

Achievers’ Assembly on Friday morning saw Ellie (Year 6) entertain us on the piano. We listened to the football reports and celebrated some very impressive running club certificates, including Leo (Year 5) who I believe has now run the equivalent of a marathon.

This week’s Class of the Week is Aztec Class for their continued excellence and also for welcoming our new family into the school, so supportively. The Wombles have moved out of Orville for the coming week, taking up residence in Wilde Class. Finally, the House Cup went to Fire House.

Looking ahead, we have the next round of the national trampolining competition on Sunday and I am going to do my best to get to see some of this. The next round is the national finals and so fingers crossed everything goes according to plan.

On Monday, the Year 4s have an architectural workshop and I hope to be back in Kahlo Class to do some more work on their electric cars. There isn’t much left to do now.

I have meetings for much of Tuesday and I am interviewing on Wednesday morning. We have football matches after school on Wednesday and then on Thursday, it looks like a day of NAHT related meetings, all of which are online.

As I said at the start, it has been a wonderful week and the pupils can all feel exceptionally proud with what they have achieved. Well done, all!