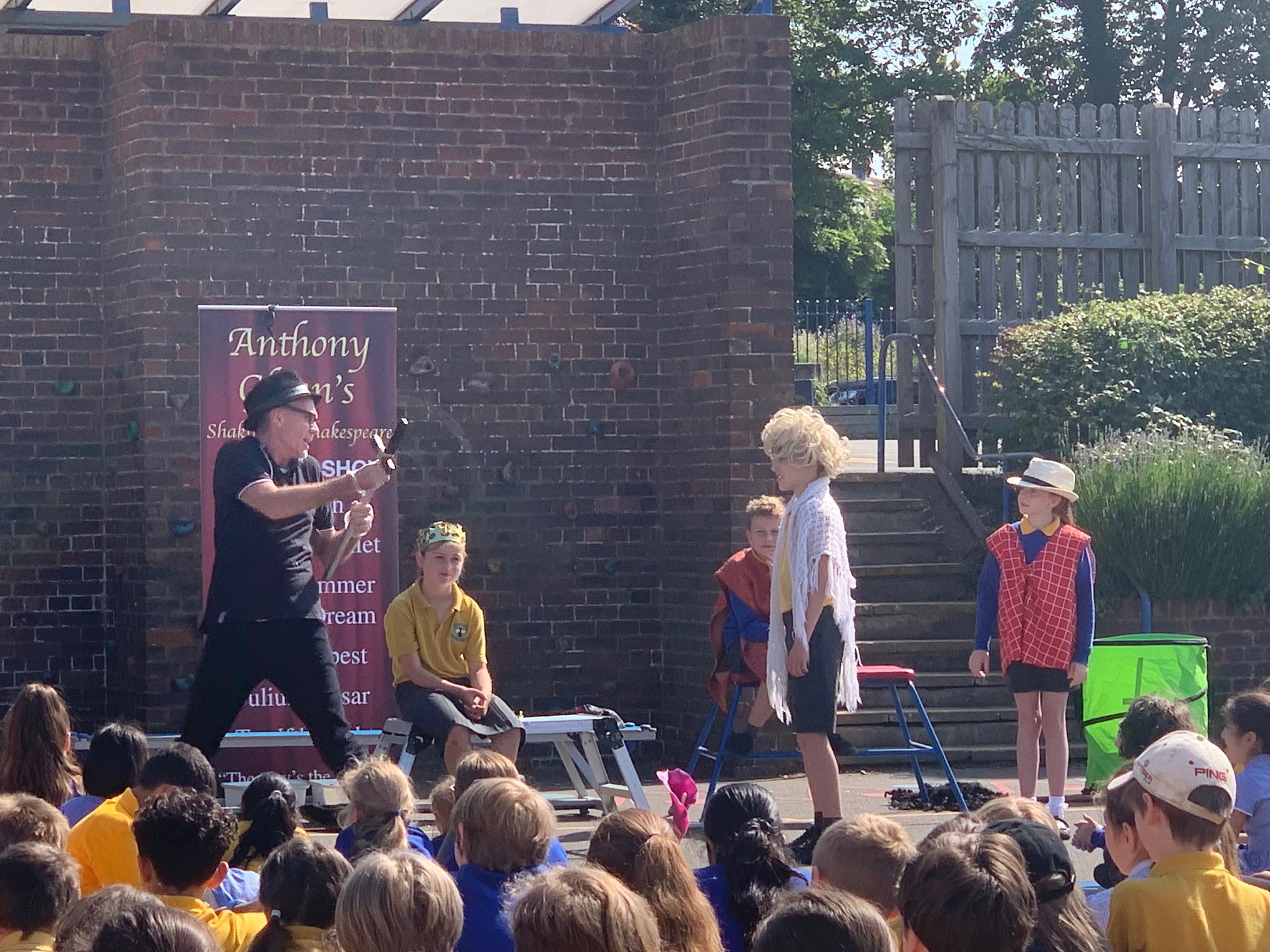 The focus across the week for our pupils has been ‘all things Shakespeare’. Every other year we have a Shakespeare themed week where we make the Bard’s plays the focus for the pupils’ work, not just in our English lessons but in other aspects of the curriculum too.

It has been wonderful visiting classes and seeing the pupils embrace the content and some challenging concepts. Who says children in primary schools shouldn’t be exposed to Shakespeare? Year 3 pupils have been working on Macbeth; Year 4s have looked at Julius Caesar; Year 5s have based their learning on Twelfth Night and Year 6 have used A Midsummer Night’s Dream.

To get pupils in the mood, Mr Wells and Mr Lord had some Tudor English phrases located around the school and pupils in Year 3 had to find them and try and work out what the words mean today. To give them a clue, they included the word(s) in a modern day phrase too. What would you say, “leave thy vain bibble-babble” means, from Twelfth Night? These days? “There was too much bibble-babble in the classroom!” The pupils had lots of fun and were then using this old English at various other times during the week.

Several classes have had great fun coming up with Shakespearean insults as I found out to my cost when I walked into Aztec Class. I was called a ‘prill-breeding, onion-eyed codpiece!’ by one pupil and a ‘weedy, dribbling ticklebrain’ by another. Later that night, my dad did offer some of his own but these are definitely not printable!

Surely the highlight of the week was the visit of Anthony Glenn. Having had to deliver via computer screen at Christmas, we were delighted that he agreed to perform A Midsummer Night’s Dream in our newly commissioned open-air theatre (the bottom playground). This meant that with careful seating arrangements we were able to sit as a school for the first time since Friday 20th March 2020 – 65 weeks ago! It was actually quite emotional. The weather certainly helped and the conditions were perfect.

For the rest of the day, Anthony worked with all four year groups on some Shakespearean acting workshops and by the sound of it, an enjoyable time was had by all.

Performance has formed a large part of this week and teachers have been sharing some of the speeches and acting the pupils have been doing. I loved the use of the green screen in Mayan Class, for example, as they recorded the three witches’ speech from Macbeth which I think I am right in saying included several large African land snails and a sorting hat!

These sorts of themed weeks are written into our yearly overview and are why we tend not to ‘mark’ single tokenistic themed days. The pupils get far more out of the content if we invest time and energy, and they are fully embedded within our curriculum. We have two such weeks pencilled into next year’s calendar already.

As a break from being insulted by Addi and her classmates, I spent some time locked in my office this week in several key meetings. On Monday morning we had a review of governance by the Local Authority. Mrs McConnell Smith and I were joined by Dr Ray and Mrs Cole, two of our governors as one particular aspect of the work of our governing body was scrutinised. Later that day, we had some training on the new safeguarding tool we are going to be using across the school from September. This will make our practice in this area even more robust than I feel it is at present.

I wrote to all parents over the weekend asking for extra vigilance over the last few weeks due to an increase in reported cases across the town. Thank you for your support with this and it was clear looking at the playgrounds that you understand the importance of this. We have had a few pupils isolating this week due to being contacted through ‘track and trace’ but it was pleasing to see them still get involved with events from this week. Chromebooks tend to be carried around the school with friendly faces on them as they take part, virtually, in as many of the activities as possible.

At this stage, I am still hoping our planned events can go ahead as we had hoped and I wrote to the Year 6 families on Wednesday explaining some of the plans. I will be writing to families of other year groups in the coming days, with particular reference to sports day in the last week of term. I have everything crossed that we will be able to have some spectators there on the last Tuesday of the term but I must warn you that there will have to be a strict limit on the number.

As a complete aside, Samira (Year 4) impressed me this week with her ability to solve a Rubik’s cube. These seem to be coming back into fashion having been around in the 1980s and Samira is able to solve it in under two minutes, comfortably beating Mr Lord who dared challenge her to a race.

I was unable to take part in this week’s Achievers’ Assembly as I was ‘zooming’ into a County PE Advocate meeting from 8.15am. For fear of FOMO, however, I ‘zoomed’ into this as well and enjoyed watching Mrs Small lead it for me. I got to see what the pupils in the classes usually see. Keya (Year 5) played the flute for us at the beginning and the end. Sophie and Elsa (Year 5s) shared their sporting success story from a recent Hitchin Belles football tournament. We also saw James (Year 6) in person this week as he proudly showed off a match ball from his amazing Wembley experience last week.

The regular awards saw Aztec win the Womble (much to the delight of Lily) as well as Class of the Week. It was a ‘double, double’ so to speak following on from Lamarr’s success last week, which seems quite appropriate as a phrase considering the theme of this week. Air won the House Cup.

On Friday afternoon, I managed to play chess against Henry (Year 3). I started a game last Tuesday but had to leave halfway through to sort something out. This week, the match was put in my diary (several times) and therefore I knew I would be able to honour it. Henry is a good player and if I keep playing him, I am going to have to up my game considerably. Well done, Henry and thank you for the game.

This afternoon, pupils brought home their end of year report, highlighting strengths and development areas from across the year. The highlight for me when I was adding my comments to them all was the exceptionally positive feedback relating to effort the pupils were making. We can only ask pupils to try their best and it is clear from this year’s reports, pupils are doing just that. Within the report were details of which teacher the pupils will have next year. I confirmed the teaching teams last week but can now confirm the path through the school for this coming year.

#Teamwhitehill is in a great place and I look forward to the start of the new academic year with hopefully a little more normality.

Next week, we start the transition process for our incoming Year 3s. After school on Monday and Wednesday, we have our transition tours in which the new pupils will be shown around with a parent, to familiarise themselves with some of the school. It will also be a chance for them to meet Mr Lord and Mr Wells again. It will be me and members of my leadership team who will be giving the tours and apologies to those who get me as I tend to forget timings and take the scenic route around the school!

On Thursday and Friday afternoons we have our additional parent consultation meetings for those pupils with additional transitional needs. Parents will have received a letter with the reports if this applies to them.

Year 3 are digging up the school in the name of history as they take part in the Big Dig and on Friday we have the dress rehearsal for the Year 6 production.

Another long blog and no doubt another Shakespearean style insult coming my way from my dad later! I’m off to play football.