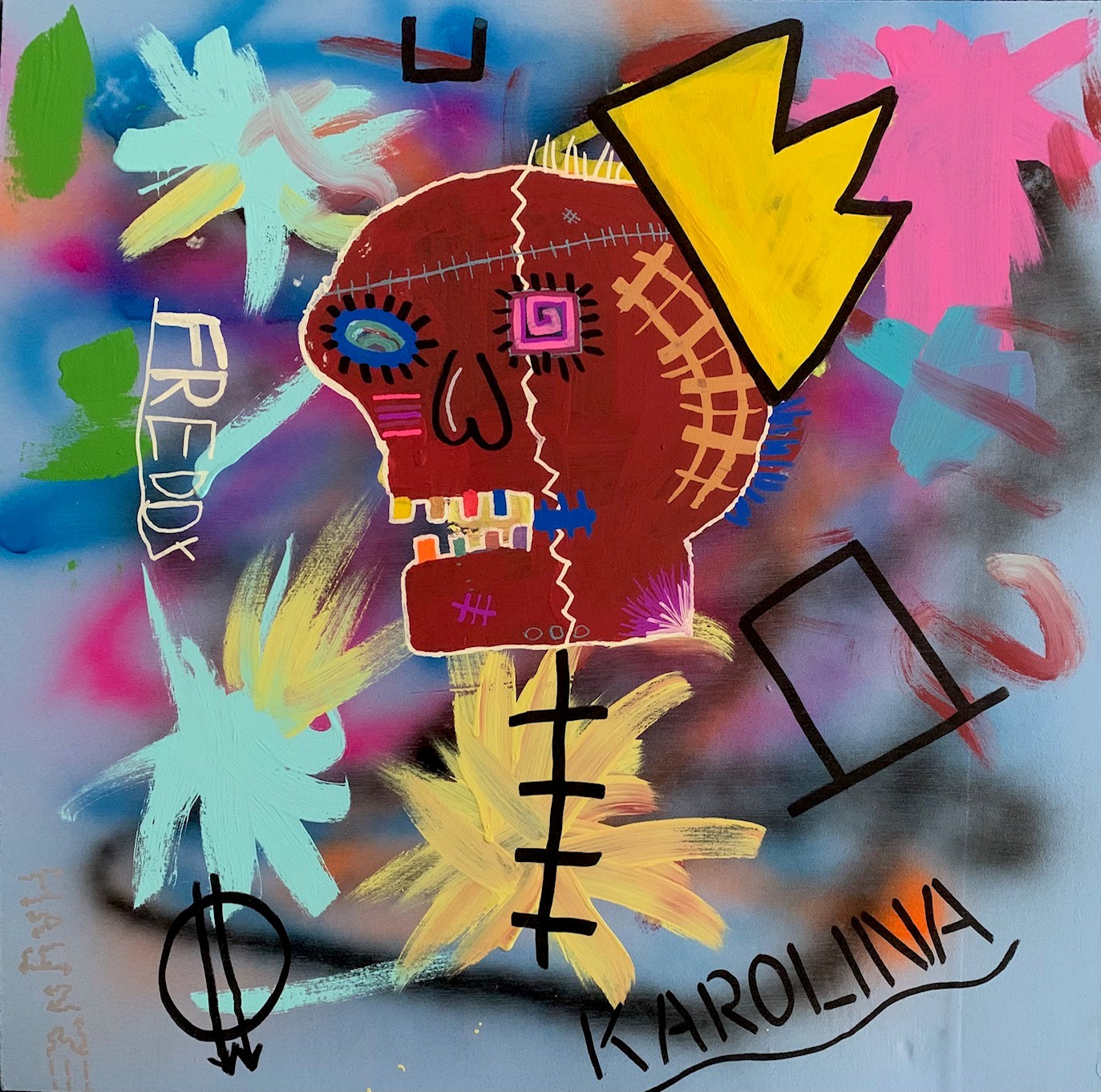 Schools haven’t been closed at any point throughout lockdown but it was lovely to welcome back all pupils on site on Monday morning. Like me and all the staff, I am sure you are hoping that this time it is for good and we can begin to regain normality back in our lives and our routines. For me, the thing I want to do more than anything is go to the theatre again. I have no doubt that each of you will have something you are longing to do when the time is right.

This week, we ran a creative arts project across all eight classes with a primary aim being one of social interaction and collaboration, as well as curriculum delivery. Working with each other was one of the main responses to come out of both pupil and parent surveys as something that pupils had missed the most. This was reinforced within conversations I also had with pupils over the last eight weeks. The entire staff team has been amazing with the package they put together and I hope you have enjoyed the photographs we have been sharing via twitter of the wonderful projects the pupils have been engaged in. I will try to gather as many as I can and share them via a gallery on our website over the coming days.

6There have been so many activities taking place, it is hard to know where to start. If I miss any out, it is not because they weren’t valuable or great fun, it’s just to try and keep this blog to a reasonable length… and those who read it regularly will know what happens when I don’t!

Both Year 6 classes, began the week with different forms of t-shirt art. Wilde Class went for a tie-dye approach to their t-shirts; a style of decoration which was popularised in the 1960s but has origins back to the 1920s in America and 6th Century India. The results were amazing with some really creative designs and use of colour.

Kahlo Class picked the murals and designs of Keith Haring for their inspiration. They looked carefully at his work before selecting their favourite motifs to transfer to their t-shirts. I am sure there must be a way of generating additional funds for the school budget by selling their work, they were that good!

Year 3s started the week prepping their scratch art backgrounds. Jacob proved that pastels can get everywhere as he did a very good impression of Violet Beauregarde from Charlie and the Chocolate Factory. Mr Lord and Mr Wells also got the pupils ‘speed dating’ with each other; a 90 second conversation with partners to encourage social interaction. At the end of the day, as Mr Wells read a story to Aztec Class whilst enjoying some of Tilly B’s homemade cookies, he noticed how several pupils could have done with a little sleep. There were some very heavy eyelids after the first full day back.

How lucky were we with the weather on Tuesday? It was perfect for Year 5 to enjoy their Olympics day outside. Jumping, running, throwing activities (enjoying the warm weather) and competitions for both classes meant there were a few aching muscles.

The weather was also perfect for Kahlo Class as they looked at the work of a second artist, Jean-Michel Basquiat. Basquiat’s neo-expressionist work which makes use of ‘hobo signs’ – a form of hieroglyphs – proved to be perfect inspiration for the pupils’ own work. Building up the designs in layers using a variety of media, including spray paint, the end results were incredible. I did wonder what the response would have been if Mrs Bailey had asked a year ago for pupils to bring in a mask to wear when spraying. Much confusion and frustration and probably parent responses along the lines of, ‘and where am I supposed to get one of those from?’ Nowadays, this is an accessory which no one bats an eyelid at and of course, we are all used to wearing. Result! We are going to look at how we can display these works of art for others to see and to this end, Mr Waluk has been tasked with coming up with a solution.

The Year 4s engaged in some drama on Tuesday and Mrs Davies’s pupils certainly looked the part with the crowns they made. The level of detail and the intricacy was lovely. Detail and precision was also needed in Orville Class who were making earthquake-proof structures. From the results I saw, I would say we have some future architects amongst this cohort.

There are some talented artists in Year 3. Tilly T, Chloe L, Libby amongst others showed their skill as they designed their ‘robo-bugs’. Linked to British Science Week, this task was perfect for our curriculum-themed week and the pupils went on to make their creatures using paper and origami.

From early summer on Tuesday, we were back in late autumn on Wednesday with a day of wind and rain. That didn’t prevent a Year 4 Roman invasion where, amongst other activities, both classes tested the shields and learned about defence formations. The testudo (tortoise formation) proved to be particularly successful against an onslaught of enemy tennis balls in the Great Battle of White Hill MMXXI.

As a new fan of The Great Pottery Throw Down on Channel 4, I jumped at the chance to join Voyager Class when they made their Greek krater pots. Starting with pinch pots, they thought carefully about the form before adding a base and handles. Once dried, they were painted in authentic colours before Greek patterns and scenes were added. The other clay work this week saw the Year 3 pupils paint their ocarinas which were made during lockdown. The pupils planned their designs on paper before transferring them onto their actual instruments. They will now be displayed on a very creative set of shelves made by Mr Waluk, in the dining room for everyone to see.

Some of our Year 3 pupils learned the power of the orchestral conductor this week during music. They were recreating the sounds of the rainforest with different percussive instruments and could only play when instructed to do so by the conductor. They thought this was amazing that their friends did as they were told just by pointing!

Wilde Class have been given permission to add some of their Banksy-inspired artwork to one of the walls by the pond. The pupils designed stencils with a post-lockdown theme which were then sprayed onto the white background. Despite what felt like a force nine gale on Thursday, and intermittent showers, the pupils did very well indeed, under the watchful eye of Mr Mills Junior.

On Friday morning we had some normality return as we celebrated an Achievers’ Assembly. Eddie (Year 5) played the piano for us at the start and the end and was amazing! We presented the House Cup to Air House (Mr Miley’s Water House were fourth!). The Womble Award went to Apollo Class with Mr Waluk saying how impressed he had been every night this week with the Year 5s. The hardest decision was of course with Class of the Week. How is it even possible to distinguish between the eight classes this week? If you could read the comments the teachers had written, you would agree. Adjectives such as ‘perfect’ and ‘fabulous’ were repeated regularly. For that reason, I decided to award it to the whole school! Each class can take a turn to have the cup over the next few days and then it will be all to play for again next Friday.

The other bit of fun on Friday morning was getting to dress up and join Mr Denney as a couple of Romans. Huge thanks to Jake’s Dad (Year 4) and Angels Costumes for the loan of these amazing resources. We believe these costumes might have been used in the film Gladiator!

I really hope this week has been ‘just what the doctor ordered’ and has eased the pupils back into real as opposed to virtual school life. There was a definite buzz around the school and my step count increased considerably as I was invited to look at all the activities and work being done. Please feel free to use the comment box below to share your child’s thoughts about the activities they enjoyed the most and what they have learned.

So, as expected, there were quite a few words in this week’s blog. This was actually the 300th blog written since I became Headteacher at Whitehill in 2013. That is approximately 420000 words! As a comparison, War and Peace is 587287 words and so I still have some way to go!