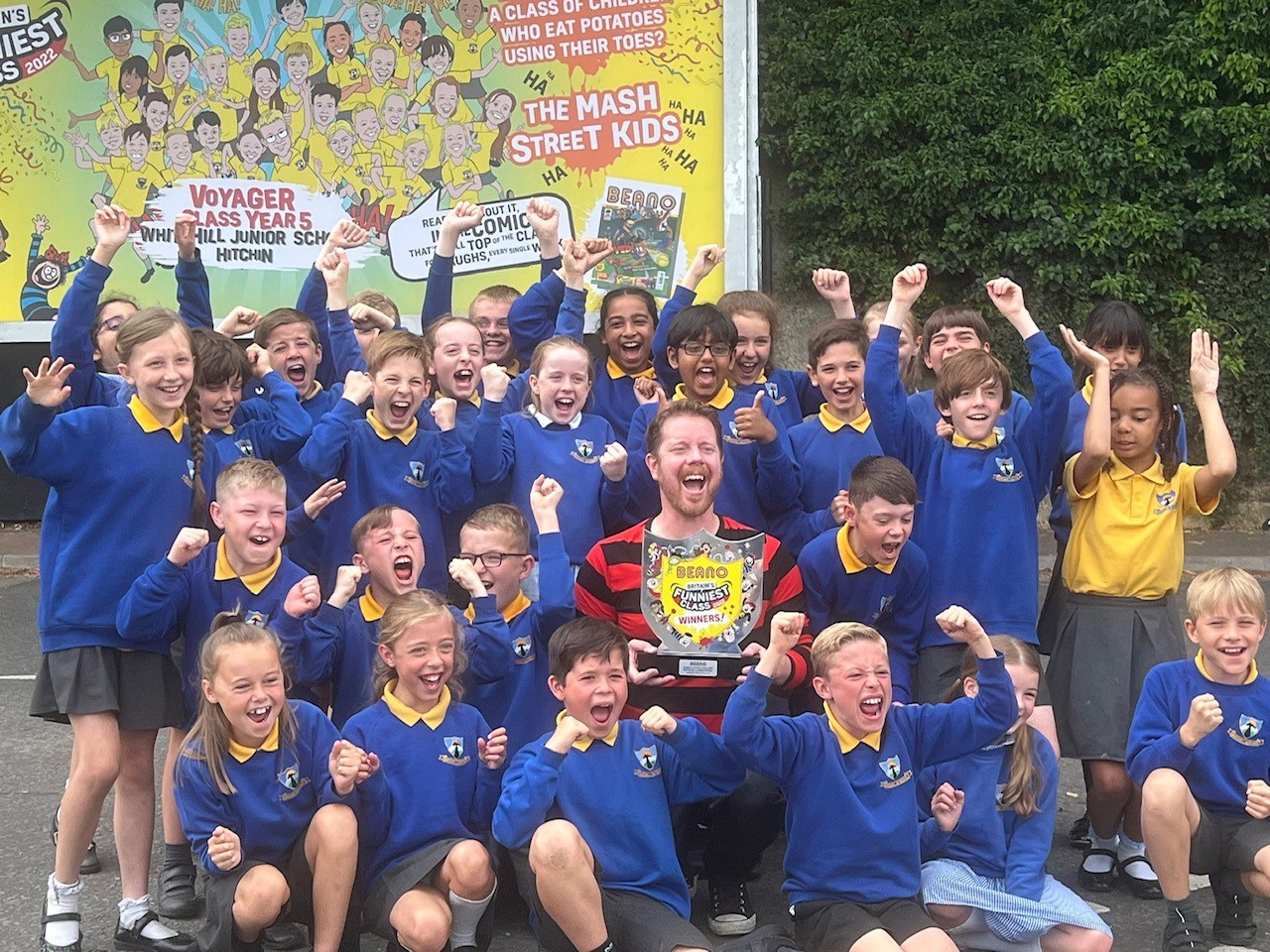 How can it be July? Already! Three more blogs after his one and then my dad gets a rest for the summer!

Anyway, over the weekend, you may have seen the tweet finally announcing the result that Benny and all of Voyager Class had been hoping for and that was that they had indeed won the Beano’s ‘Britain’s Funniest Class 2022’ competition. A huge thanks on behalf of everyone at Whitehill to all who voted – more than once – to help bring the trophy to Hitchin.

I have been in constant communication with the Beano since I found out and they couldn’t have been nicer. An early release of the comic saw the class as Beano characters fill a whole page and those who don’t subscribe were able to pick up their copy on Wednesday. This was also the day that the next part of the prize took place.

We had been asked to get to Hitchin station by 10.00am as the Beano wanted to unveil the billboard which was a giant poster of Voyager Class and their winning joke. We were told there would be some media but didn’t expect to find so many cameras. ‘ITV are here too!’ we were told as we arrived. The next four hours were spent being movie stars and models as the Beano captured enough footage to use in their promotional film and various stills.

Voyager Class and their Beano ‘promo’!

It was an exceptional day. The pupils were amazing and I have to thank the Beano, the media teams and also the staff from Hitchin station for making them feel so special. At no point did any pupil say they were bored, despite having to be patient for their turn to be in front of the camera, or start to get irritable. I was a very proud Headteacher and so pleased for Benny and the class. They were truly awesome (and deserved the ice-creams we had when we walked back to school). Over the coming days, I will put some more photographs in our gallery on the website.

Outside of this national award, the week has been as busy and as productive as ever. For me, that has involved (unfortunately) even more time hidden away in my office trying to catch up and get ahead – not sure both are possible, however!

Whilst Phase were in on Monday for their final Year 6 workshop of the year, I was listening to a three-hour Safeguarding update. I am certainly not knocking this; safeguarding is probably the key component of our work in a school and there was a great deal to take in and digest.

On Tuesday afternoon, a group of Year 5 girls were invited to take part in a Skateboard Workshop organised by the Schools Sports Partnership. It looked like such great fun and what a different opportunity for our pupils to take part in. Looking through the photos, some of our girls looked absolute naturals – Jessica – for example, whereas others where a little more hesitant. Nevertheless, well done to all who gave it a go – they all certainly achieved far more than I would have been able to.

After the exciting day already mentioned with the team from the Beano and Voyager Class on Wednesday, I was back in school in time to welcome parents and carers who were able to come in for a look around. As books are coming home in a couple of weeks, this shorter session was a chance to see the new displays and also a chance for some pupils to go and stare at their new teacher for a few minutes.

Conversations usually go like, ‘You are going to be my teacher next year.’ ‘I know!’ Pupils seem to forget that their teachers have already spend lots of time discussing their new classes and learning all about them. Mrs Bryan, for example, has already broken the laminator (again) printing labels for her new pupils!

Seriously, though, my team works so hard to ensure they are as prepared as they can be for their new classes and are looking forward to spending some time with them on transition day, if not sooner.

After school, we had another cricket match, this time against Weston at home. For once I was able to pop out and watch a little more. Despite losing some early wickets, both bowling and batting continues to improve which meant we won this time around. Well done to the team which has one more fixture left this year.

The key event in the diary for Thursday saw me close the nominations for this year’s core purpose award. I will now spend some time reading the nominations and counting the votes. All will be revealed on the last day of the year in our final assembly. For most of the rest of the day, I was Googling, ‘Whitehill+Voyager+Beano’!

Eoin (Year 5) started our Achievers’ Assembly on Friday with some brilliant clarinet playing. He played several pieces for us and I was really impressed with his tone. The music at the end was provided by Lottie (Year 3) who played the piano. Again, it is lovely to see how much progress our musicians make over the course the year.

We celebrated several external sports awards in football, dance and swimming as well as presenting the usual three school awards. The House Cup went to Air House and the Wombles went to Mr Lord and Mayan Class. He went for a new tactic this week which was to throw rubbish all over his floor, 30 minutes before an open afternoon and then tidy it up again. It was bound to look good!

On the back of their national success, the Class of the Week went to Voyager Class. It just had to!

After our assembly, I met with a potential new governor along with Dr Ray, our Chair of Governors. We had a lovely chat and visited the classrooms. As always, it was lovely to see the pupils so engaged with their work, including Charlotte (Year 4) who had used her computing skills to replace the Mona Lisa’s face with her own.

Quite a lot of Friday afternoon, in between writing this blog, has been spent handing out Headteacher’s Awards to pupils across all four year groups for some great work. I have seen Year 3 maths, Year 6 history and Year 6 art amongst others.

Looking ahead to next week, we have our two transition tour evenings for our incoming Year 3s. Green Class are coming on Tuesday and Yellow Class on Wednesday. I do enjoy showing my groups around the school as it is the first part of getting to know them and learning some more names. I do already know a few who have older siblings at the school.

On Wednesday and Thursday next week, we have a group of gymnasts performing at Hitchin Girls’ School’s Gym and Dance display and I am planning on attending on Thursday to watch. Some Year 5s are going on the Wednesday afternoon to see the matinee.

On Thursday and Friday afternoon we have the additional (virtual) consultation appointments for parents of pupils with SEND. It is a chance to have an additional conversation with their child’s new teacher.

There is a cricket match after school on Thursday and then on Friday the diary is so full, I can’t quite make out what’s happening! We have some pupils out an a Sports Partnership celebration; we have the dress rehearsal of the Year 6 play; I have a meeting straight after Achievers’ Assembly to take me through to lunch and then after school, the Friends’ Association are holding their ‘Summer Social’ on the school field.

All families are welcome from Highbury and Whitehill! It’s free to enter and you can buy wristbands for the inflatables on the day or they will be on sale in the playground on a few days next week.

There is also a fantastic raffle being drawn on the night with some incredible prizes including a family day pass to Centre Parcs, a family photography session, a designer handbag, champagne, vouchers for local places and amazing hampers! Tickets have been sent home with the children, but if you need more please ask in the office. Ticket stubs need to be returned to the office with the correct money or you can buy tickets on the day if you are coming.

The committee is still looking for a few volunteers to help out on the day, so if you can spare an hour to help out, please click here to sign up. Thank you in advance for your support.

That’s it for a most incredible week! I’m off to see where else Voyager Class have managed to get their photograph.