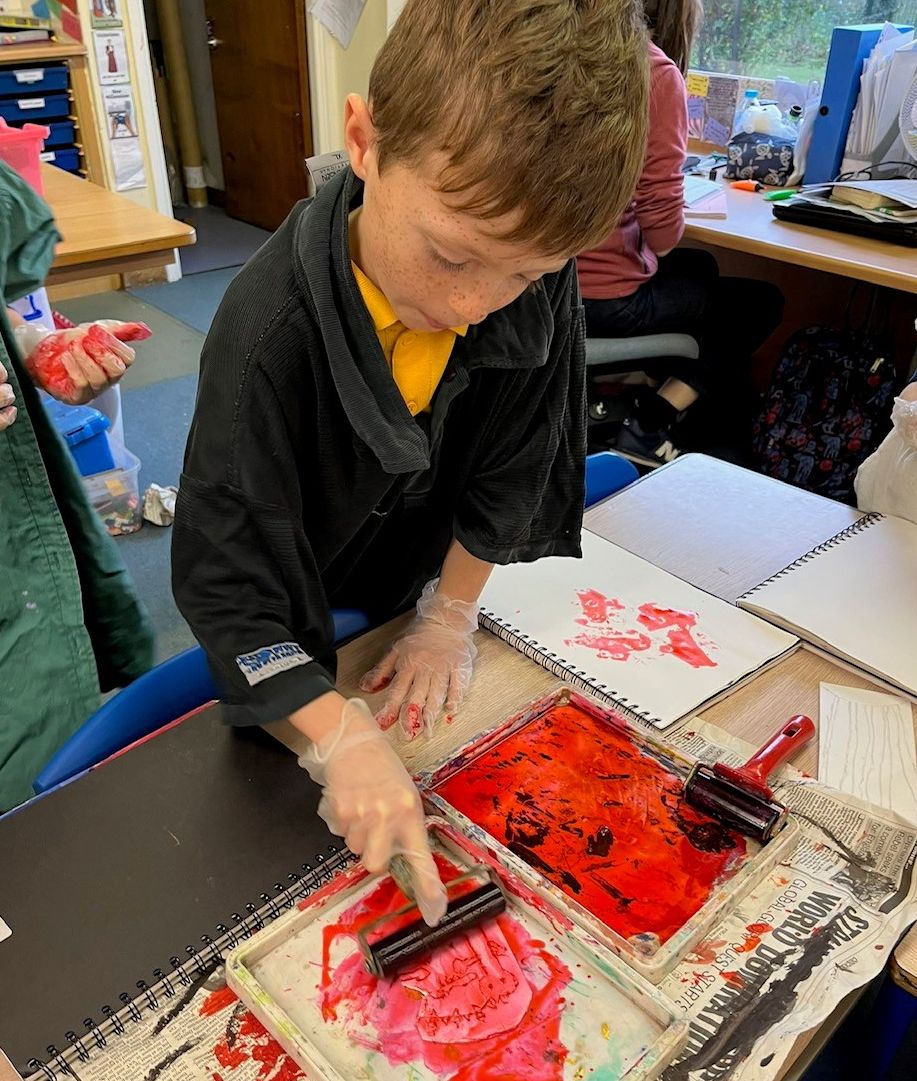 Although I wasn’t able to make it this weekend to support, on Sunday our trampoline teams took part in the regional rounds of this year’s national competition. Mr Lord and Mr Henderson were there looking after our gymnasts and kept us all informed via twitter. A huge congratulations to all who competed and all who qualified for the zonal round in the new year.

We celebrated the team and individual performances in Achievers’ Assembly on Friday morning and I am keeping everything crossed that I will be able to get to the next round. I am just waiting for the details from Mr Lord.

I literally have not stopped this week. I have attended meetings; I have had meetings cancelled; I have been in class and I have met potential new parents. Somehow we have also ended up in December! 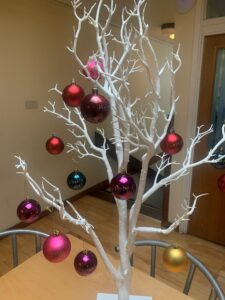 As part of my assembly on Monday, looking at advent, I reminded the pupils of the need for detail on any Christmas cards they bring in to be posted through our school delivery system. We have, for example, five Jacobs – two of whom are in the same class – and so surnames are important. I mean, we have two Mr Millses working here and so should you want to get a card to the right one, you may want to specify, in as an imaginative way as possible, which one you mean.

Miss Gooderham (there is only one Miss G) took another girls’ football team for the last fixture of the year to Wilshere Dacre. There were several girls making their debut for the school and although they didn’t win, they played really well and more importantly, had a great time.

Our Year 3s are working really hard preparing for their Christmas production at the moment but are also continuing to work in class. This week they enjoyed a Stone Age workshop on Tuesday morning delivered by our friends from Hitchin Museum. It was quite amusing taking some prospective parents on a tour through the hall and seeing Mayan Class being taught how they would have hunted with a bow and arrow. I don’t wish to be critical, but I think many of the animals may have survived judging by the accuracy of the shooting! It reminded me of Joey (Year 5) and his archery at last week’s sports festival where he managed to hit the basketball backboard!

I have been in Kahlo Class for several afternoons this week teaching design and technology. We started the unit of work – linked with science – on making an electric car. I have been so impressed with the way the pupils have worked; their accuracy in constructing the chassis and their independence. I will be in there for a few more sessions before the break to try and get the cars finished. I wonder if they will travel and if so, will it be in a straight line?

In fact, I have had several members of staff say how impressed they have been with Kahlo Class this week. Well done to them!

I found a few minutes to visit Year 4 on Wednesday and was slightly regretting the decision. I was confronted by Lamarr class doing some press-printing… with ink… and I wasn’t certain it would stay where it was meant to. I mean, I saw Leelun with what could only be described as a green moustache! I have no idea what he was doing with his printing – I suspect he had an itch that just needed scratching!

We welcomed a new Year 6 pupil to Whitehill on Thursday morning. Yahya has joined Kahlo Class and I was so pleased (and impressed) with the way his peers made him feel welcome and helped him settle. He even had the pleasure of my teaching on Thursday afternoon and soon made progress with his model vehicle.

Friday’s Achievers’ Assembly proved to be a mammoth affair. We didn’t have one last week and so we needed to catch up on some sports reports and many different individual achievements. The music was provided by Libby (Year 5) on her clarinet – she has a lovely tone and it is wonderful to see the progress she has made since Year 3. We also had Edie and Sofia (Year 6) sing for us. They both have lessons with Miss McConnell Smith and did so well.

The Class of the Week trophy was awarded to Lamarr Class. Despite my attempts to sabotage the classroom with sawdust, the Wombles are heading to Kahlo Class for the week. The House Cup this week has been awarded to Earth House.

I had a meeting with two governors after assembly and it was lovely that one was able to join our earlier celebrations. Another good way of acknowledging all the work the pupils do.

I have mentioned in previous blogs how successful the space-themed week was for our Year 5s. Before they were sent home, I went up to see some of the games which were made by pupils in Apollo Class. They were great fun and I was particularly impressed with Thomas who made a space version of hungry hippos; Jemma who had a version of Cluedo; Nandi who had me firing meteors at planets, trying to avoid earth and Jacob for his inter-class tic tac toe (even though he beat me).

I am hoping this weekend will be uneventful and we can all get some well-earned rest before the hectic last few weeks.

On Monday we have Phase coming in again for our Year 6s followed by a visit from Mr Derrett – a science teacher from HGS – to work through some practical activities based on electricity on Tuesday.

We have some pupils taking part in a dance workshop on Wednesday afternoon before the excitement of the Year 3 production dress rehearsal on Friday morning. I will make sure tickets come home at the start of the week for our Year 3 parents for the main shows.

The other main event of the week is the Friends’ Association Christmas Social taking pace on Friday 9th December at Highbury School. Following on from the success of the fun get-togethers at Whitehill, they are hosting this festive fun event at our feeder infants. It starts at 3.15pm and everyone is welcome. I think I quite like the sound of the mulled wine – I will probably need it by then! 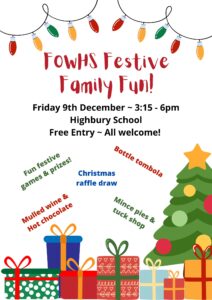 Hoping you have a great weekend.