I got to use a Bunsen burner!

I got to use a Bunsen burner! 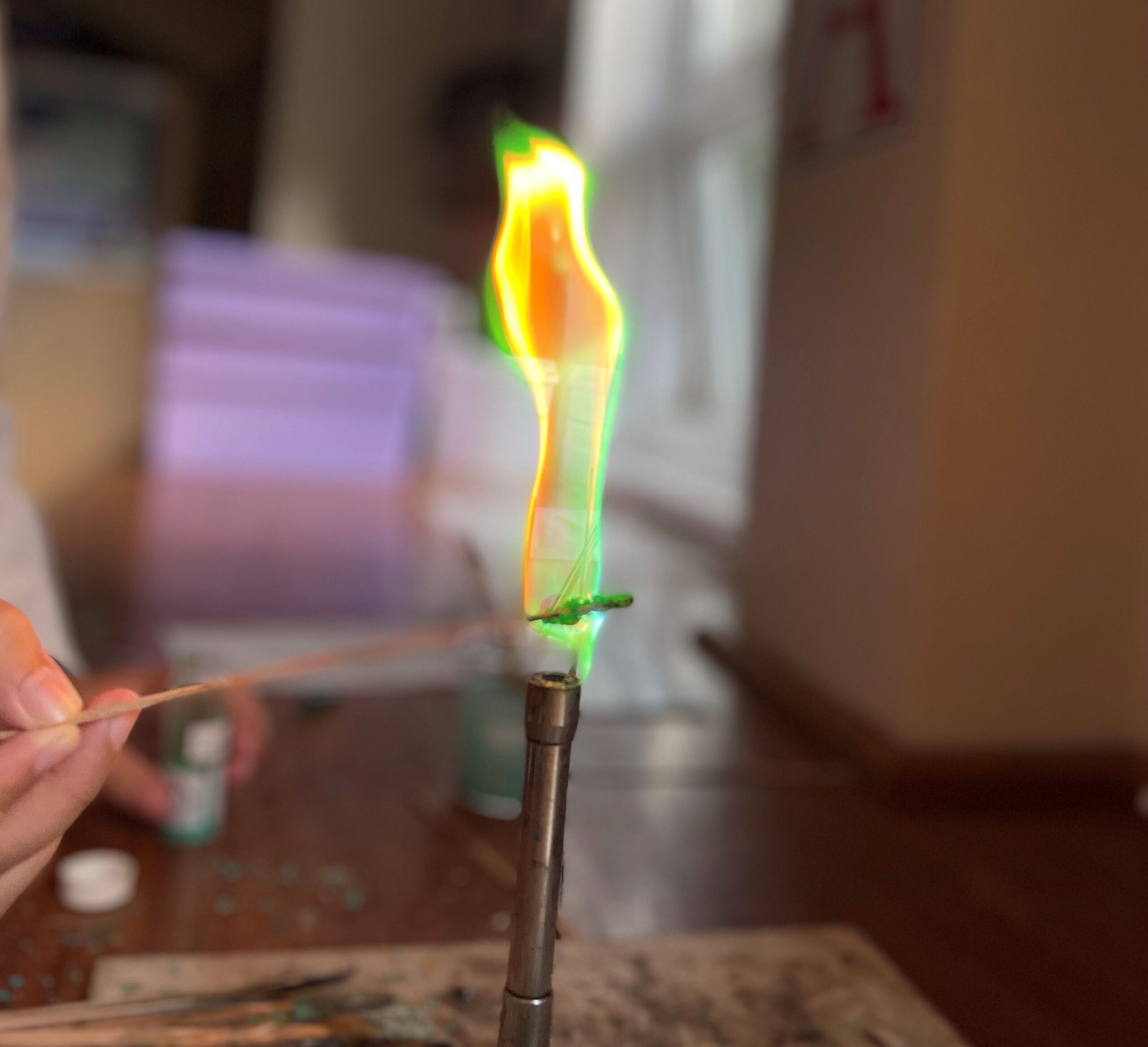 I think the best summary of the week we have just had would be ‘a tad busy’! At this time of the year deadlines come around so quickly; some related to the current academic year and others thinking already about next year. Add to this mix, one off events; usual classroom lessons, above average temperatures and the threat of an Ofsted call and I think my summary is quite apt. That being said, as always, I have enjoyed the last seven days and have plenty to share with you in this blog.

Before the pupils arrived on Monday, a photography team were on site and erecting the scaffolding which we would use to take our first whole school photograph for five years. Others have been booked but lockdowns and regulations meant they had to be postponed. By 9.15am the pupils were lining up and taking their positions. I was really impressed with the efficiency of the process and I have already had a look at the proof. Details will be sent home in due course should you wish to purchase a copy. We will then be able to replace the one that hangs near to the school office. As a bonus shot at the end, Mrs Cornell’s baby joined us for her first ever school photo. That won’t be the one you get, don’t worry.

Across the whole week, members of the leadership team and teachers have been meeting for the final Pupil Progress Meetings of the term. The opportunity to talk through the final assessment point of the year and also hand over detailed information about each pupil to the teachers who will be teaching them from September. We had to block up windows, just in case any pupils guessed what we were doing and what the significance of the two teachers was. You won’t have to wait for long, as when the school reports come home next Friday, there will also be details of the teaching teams for next year.

Last Friday’s blog asked you to make your last few votes for Benny and Voyager Class in their pursuit of the title, ‘Britain’s Funniest Class’ via the Beano comic. Our chances looked good on Friday evening and then something strange happened over the weekend. One of the schools who were lying in third place suddenly had a surge of votes and stormed into first place. Their lead by Monday morning appeared unassailable and I could tell the class were a little deflated. Even though it looked an impossible task, we kept voting and kept our fingers crossed.

On Tuesday, I had an email from Beano HQ which explained a problem they had been having with their ‘bar chart system’ and that although the votes were being collected and counted correctly, the way they were being presented on their website was incorrect. I was sent the actual votes as at 1.00pm and could see we were ‘certainly in the running’. I could, in fact, see we were more than in the running but didn’t want to raise any false hopes. Even by just telling the class it was closer than we thought, however, definitely lifted spirits and we kept our fingers crossed.

The competition has closed and it closed at 6.00pm on Wednesday. Just before it did close and they took down the bar charts, they clearly fixed the bug, and the Voyager Class bar moved into first place. We will not officially know if we have won until the end of June but I am expecting an email in the coming days with a little more information for schools. As soon as I hear, I will let you all know; after I have told Benny and his friends who ask me if I’ve heard every time they see me!

On Tuesday morning, I accompanied the 23 Year 6 girls who are moving to Hitchin Girls’ School in September for a taster session in the science labs. We have a very close link with HGS as you are probably aware and over the course of the year, Mr Goldring, Head of Physics, has been into Whitehill to deliver science sessions to Year 5 and Year 6. This time it was our turn to visit them and experience a secondary school style lesson.

I had a great time and I think the pupils did too. The two lessons across the whole morning focused on ‘light’ and for the first session we looked at visible light; looking to see how light travelled. After playing with some ‘magic beads’ (beads which you could only see the colour of under ultraviolet light) we then got to use the Bunsen burners and did some flame tests to see how fireworks get their colours.

One takeaway for me during my visit was the independence the girls had in terms of using the equipment, including the Bunsen burners and I think highlighted the fact that occasionally we might be guilty of wrapping primary pupils in a little too much cotton wool. We are clearly not going to start using such equipment in primaries, but there are times when I think we could give pupils far more ownership of challenging tasks. I am always looking for opportunities to learn and reflect – Profound Individual Growth in action.

The cricket team travelled to Ickleford after school and had a really good game. They didn’t get the win, giving away a couple of wickets with runouts, but bowled very well. There are a couple of games left this season which I hope I will get a chance to watch.

The Year 4s became the first cohort to take the DfE’s statutory multiplication tests this week. Mr Denney and Mrs Davies reported that they seemed to go well and were uneventful. Unlike when the pupils use the TT Rockstars platform, the government’s site does not let the pupils know whether the answer was right or wrong. I assume we will be told at some point in the future and will then be advised how the data is to be reported.

Year 3s have been working on their latest D&T project this week and are designing their own rainforest themed cocktails. They had to decide in a blind tasting what flavours worked well together. They managed to get Mr Wells to take a shot of tomato juice; something I know he really doesn’t like! Their final concoctions were made and enjoyed on Friday afternoon.

I presented quite a few Headteacher’s Awards this week with many going to pupils in Year 3 for some wonderful written work. I do like seeing the extended writing books when pupils are sent to me as it gives me the opportunity to see the progression from September until now. I also presented an award to Jacob L (Year 3) for the hard work he has put into reading and the progress he has been making.

I do enjoy showing people around Whitehill. This week, I showed a prospective Whitehill family what life at Whitehill is like. There is always an exciting atmosphere and lots of enthusiastic learning. Our Class Reps also spring into action and share their knowledge of their class. One such Rep and someone who is amazing in the role is Isla in Voyager Class. She has such a lovely manner with our visitors and their feedback after we have left the class is always wonderful. When we get back to the office at the end of the tour, Mrs Lanni usually lets me know how long I have been, but I enjoy it so much, I can’t help taking so long! I think she secretly warns visitors before I start that they could be here for a long time! I’ve promised my dad a tour soon, so he can see why these blogs are always so long. He might then stop moaning!

On Friday morning, staff from HGS and HBS visited to meet with the Year 6 pupils moving to their respective schools in September. They shared with them some key information about the transition day and starting secondary school as well as answering lots of questions.

I led our weekly Achievers’ Assembly where the music was provided by Alfie (Year 3) and his mentor Eddie (Year 6) who played the piano for us.

Our regular awards were shared in the following way: Class of the week was given to Aztec; Fire won the House Cup and the Wombles went to Wilde Class.

We also shared some sports reports read by Darcey and Lily (Year 4) who took part in a sports partnership event last Friday; as well as hearing an account of the cricket match.

The other very impressive award that we celebrated was for Eleanor in Year 4. She shared three certificates including her Taekwon-Do grading which was the one before a full black belt. At such a young age, this is very impressive. Well done, Eleanor.

In any spare moment I have had this week, I have been adding my comments to the pupils’ reports. It is time-consuming, but I do enjoy reading what the teachers have written as it always fills me with pride to see the relationship that has developed between the teachers and their classes. I get a real sense that the teachers know their pupils and have had a great year.

So with only 25 days to go, let’s have a look at what is in the diary for next week.

We are having our second curriculum-themed week in school which is our Humanities week. Our Geography, History and RE subject leads have worked together to put together a series of activities and visits to enhance and complement the teaching of these subjects across the year.

On the sports front, we have a golf competition, a cricket match and a tennis competition.

I have meetings every night, including HGS governors, Whitehill governors and an NAHT branch meeting. And, as already mentioned will be listening intently to the phone ringing between 11.30am and 2.00pm; the daily window for that key (and anticipated) call form ‘Ofsted Towers’.

Have a wonderful weekend.