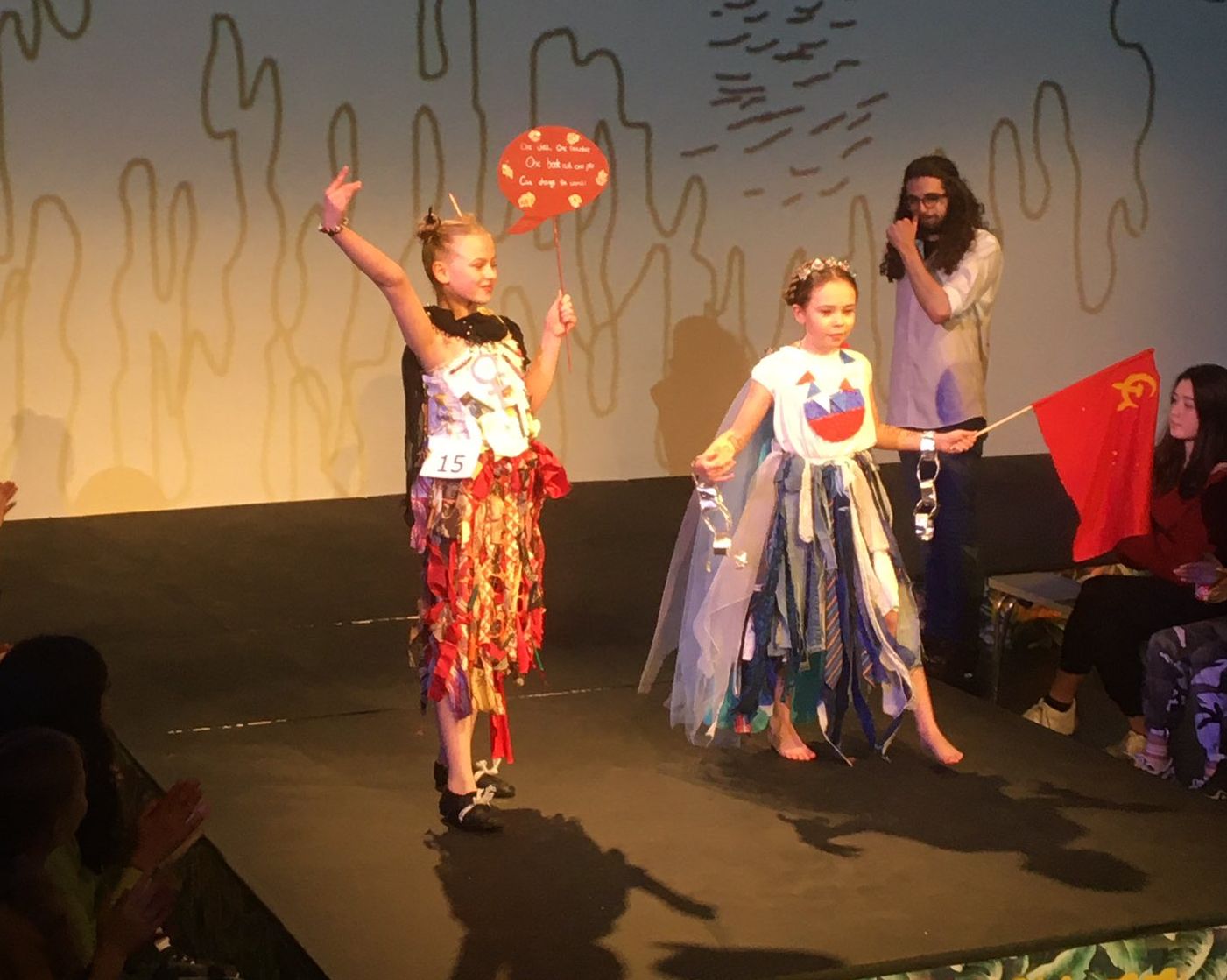 Despite the awful weather, there is once again so much to celebrate and acknowledge in this week’s blog. As I start to write, I am slightly worried by its length and therefore a certain response I might receive but let’s go for it and see what happens!

I joined Mrs Bailey and a group of pupils at St Christopher’s School in Letchworth last Saturday, for this year’s Recycled Fashion Show. Although I offered to do make-up and hair as the pupils got ready, I was dispatched to man the glue gun for last minute repairs to costumes. I know my place. After an afternoon rehearsal it was soon time to take our places for the main show, as our models presented their ideas based on the theme ‘truth to power’. The costumes all looked amazing under the lights and the pupils can feel very proud of their work which will now be displayed in a gallery in Letchworth over the coming days. Although we didn’t win this year, three of the six costumes were shortlisted for the final. Thank you to Mrs Bailey and Mrs Davies for their work in running this project again. Thank you, too, to all the parents who came along to support.

Monday morning was amazing! It was fantastic to see pupils carrying in their World Book Day potato characters which they had spent the weekend creating. There were so many imaginative ideas and Mrs Vernon was so pleased with the effort everyone had gone to in support of her project. All of the potatoes have been on display all week and have been the centre of attention. We even stopped a governors’ meeting on Wednesday evening to go and have a look at the creations. It wasn’t a competition which is a good job as it would have been impossible to pick a winner but I do have to single out Nate (Year 3) who not only brought in a character, he created the whole book in the form of ‘Where’s Wally’. Inspirational! I do hope you enjoyed seeing the photos and also for those who came into school, seeing them up close. I wonder what inspirational library project Mrs Vernon will come up with next?

You will have seen the progress made with the new play equipment installation this week. The old stuff had been removed by the end of Monday and then over the next three days, the new and very different pieces of equipment have been installed. You may remember me telling you that it was our Head and Deputy Head Boys/Girls who picked out the different pieces of equipment. Talking with pupils who have been watching the installation, I know they are champing at the bit to try it out but we will need to wait a few more days as the rubber flooring is installed and the foundations fully harden. This project has been partially funded by our Friends’ Association and we are extremely grateful to the committee and all of you who support the different events they put on. I am also looking forward to seeing the younger siblings make use of it as they come down from Highbury at the end of each day.

Mr Miley took two Lower School gymnastics teams to Knights Templar School on Tuesday morning to take part in a competition. We have some very talented gymnasts in Years 3 and 4 and you may have seen photos of Lily (Year 4) with her foot up by her ear smiling for the camera. Both teams did very well indeed, finishing 1st and 4th. We took great delight in celebrating both teams in our Achievers’ Assembly on Friday.

The weather put pay to two other sporting events this week. Netball against Purwell was cancelled, as was the girls’ football festival at Wilshere Dacre.

Later in the day, parents of pupils in Year 4 joined Orville and Lamarr Classes for their book launch. Both classes have become published authors since being involved in the ‘London, Londoff’ project which saw them visit London just before half term. Parents had the opportunity to hear the pupils sing, listen to their chapter being read and then see the creative process the pupils went through to get to the final submission. Thank you to everyone who was able to come in and celebrate this lovely project.

I was out of school on Wednesday afternoon at the University of Bedfordshire supporting their interview process. I was impressed with the post grads I was interviewing as they looked to get onto the PGCE course. All three showed real potential and desire to pursue their career of becoming a primary school teacher. I like being part of this process and seeing the future crop of teachers begin their journey. The only slight concern this time was as I was chatting to a mature student (40+), whose name I recognised. In my head I was wondering whether I had taught one of her children at some point. It turned out that I was half right; I had taught a family member. Not her son, however… her brother! When he was ten. He is now 37! She knew how to make me feel old.

I was straight back to school afterwards for another murder mystery rehearsal. I have no doubt we will get to the end of the script by the time we perform it to you next Friday. At the current time, however, I am still not 100% certain myself who the murderer is… or who gets killed for that matter!

Thursday felt like a day to play catch-up. I had a couple of meetings and also spent some time to trying to respond to an increasing email inbox. School tours, after school provision and safeguarding training are regular subject headings at present.

Achievers’ Assembly always cheers me up. Music this week was provided by Ellie and Ava who played the piano and the saxophone. We celebrated the sporting events as well as individual successes with TT Rockstars. We also had the opportunity to listen to Year 4 sing their amazing book launch song again. Mrs McConnell Smith has been running several initiatives recently linked with well-being and on Friday morning we presented prizes to those who have been particularly engaged with the projects. Ethan (Year 3), Rio (Year 4), Helena (Year 5) and Luca (Year 6) received vouchers for their work with the ‘Bricking It’ initiative. Keya (Year 4), Alicia (Year 4), Niamh (Year 6), Eoin C (Year 4) and Finley (Year 5) received similar vouchers for their half term Five Ways to Wellbeing project and there were ‘highly commended’ prizes for Roisin (Year 4), Lauren (Year 5) and Alana (Year 4). The House Cup was presented to Fire and Mayan Class were Class of the Week.

Straight after assembly, I headed off to a local headteachers’ consortium meeting. Due to diary clashes, I haven’t attended one of these for some time and so it was nice to attend to catch up on what is on the minds of the local group of headteachers. With my work with the NAHT (National Association of Headteachers), I quite often engage in discussions about wider, national issues and so it was interesting to see if there was replication within Hitchin. The short answer is, ‘yes’.

I was back at school towards the end of lunch and was able to catch up with events ‘back at the ranch’.

So, I’m off to play football with Herts Heads and therefore should probably start warming up. Assuming I survive, I will be back at school on Sunday afternoon to accompany Miss McGurk and the choir as they join other Hertfordshire schools at the Royal Albert Hall for the music service’s gala concert. This is always a lovely event and the music is always such a high quality. When I think of the opportunities I didn’t have at junior school (many years ago), it is wonderful to think Whitehill pupils can leave saying they have sung at the O2 and the Royal Albert Hall.

Looking further ahead, on Monday, we have our annual review visit with our Local Authority advisor. This will be an intense but very productive day and will be an opportunity to reflect upon the school improvement work we have been doing since September. Phase are in during the afternoon to work with our Year 5s again.

Tuesday looks quiet – probably a mistake to commit that to print. I do have a couple of school tours to run next week for prospective teachers. With Mrs Little leaving us at Easter, we have started the process of recruiting for September and the first part of this process usually starts with prospective candidates looking around and getting a feel for the school.

The highlight of the week has to be the Murder Mystery on Friday. How many more rehearsals do we have? I will be back at school on the Saturday morning to clear up so that the cubs can move in ready for their sleepover event. Having done this with the Year 5s each year, I wish the leaders all the very best!

Between now and the end of term, Ethan (Year 5) will be selling ‘Easter Chicks’ in aid of Garden House Hospice in Letchworth. They are on sale for £1 each and we will have them near the school office. In the last two weeks of term, he will also venture outside to sell them at the end of the day with his mother. I know he would appreciate your support.

Before signing off, can I remind you that I also sent out another Spring Update today and would urge you to have read as there are some key information items included.