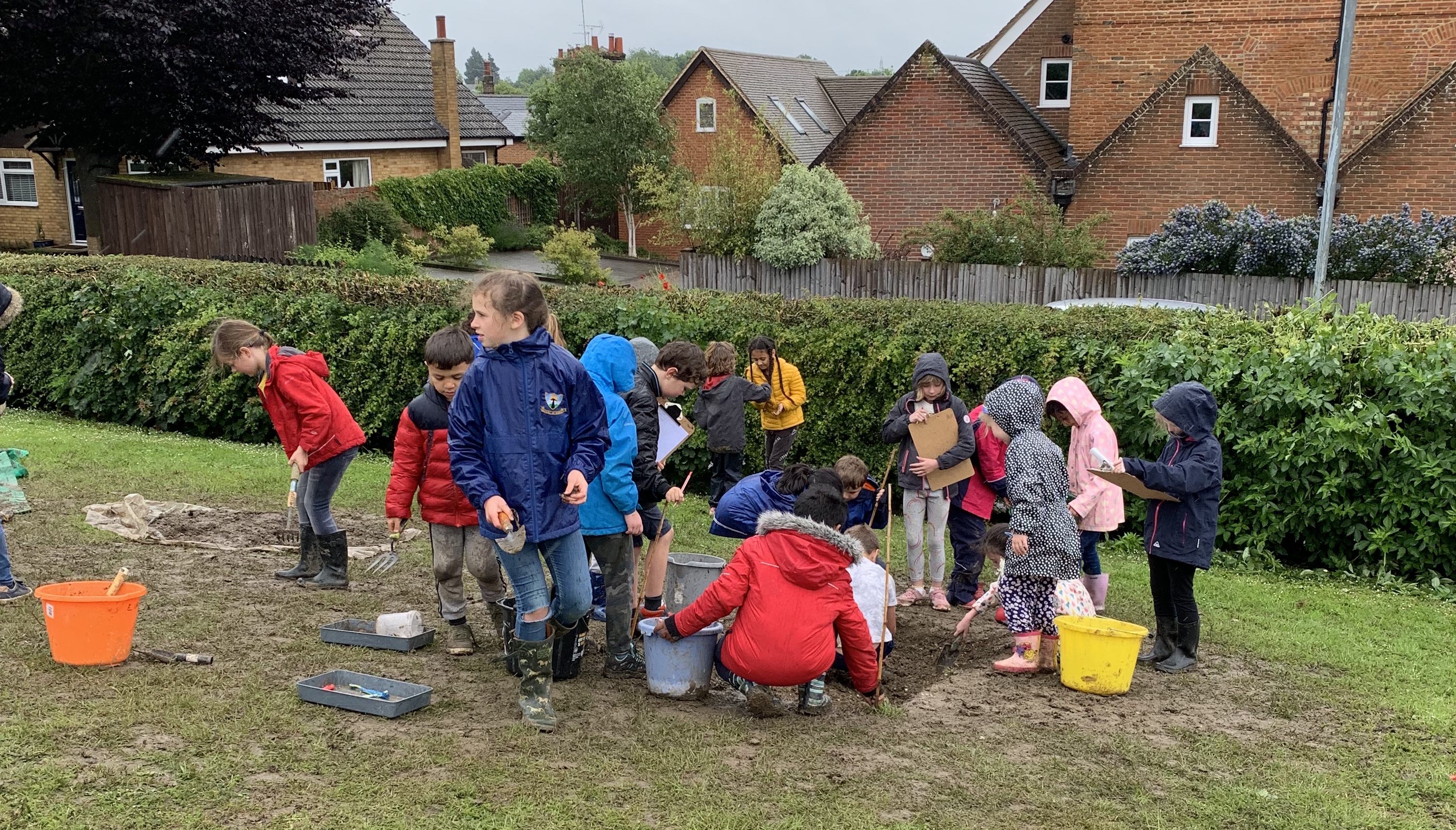 The two key projects for pupils this week have been the ’Big Dig’ for our Year 3s and ‘Bikeability’ for many of the Year 5s. Both meant the pupils were outside for significant periods of the day and having chatted with many of those involved this week, not one person moaned. In fact, the Year 3s have said it made their archaeology even more fun. I hope their parents agree as I imagine the washing machines are working overtime at the moment?

The Big Dig gives the pupils the opportunity to take on the role of Tony Robinson and the rest of the Time Team crew, carefully opening up a pit and removing, cleaning and processing finds. They use the evidence to produce a diary and explain what they have learned. On Thursday morning, I braved the weather and visited the site where I was fortunate enough to see the pupils in 3EM find some coins which of course, in true Time Team speak, are credible dating evidence (You can tell what I watch during the holidays). I have read a few diary entries as pupils brought their work to show me and several refer to the fact I wasn’t wearing a coat. What was I saying about bad clothing?!

The Year 5s have certainly needed their coats as they embarked upon a week of instruction and testing, learning how to ride safely on the roads. County instructors run the Bikeability course and start on the school playground before spending the next four days on the roads around Hitchin. Pupils are either awarded Level 1 or Level 2 certificates and badges and we will celebrate their successes in a future Achievers’ Assembly.

We have had two Year 6 transition meetings this week with Hitchin Boys’ and Hitchin Girls’ School. That leaves us with just the Priory School and they are due to visit on Monday morning. They are valuable meetings and we spend time talking about each Year 6 and what their relative strengths are. Staff from these secondary schools then spend time with the pupils themselves to give them information about transition day and also answer any pressing questions. Transition day this year is on Thursday 11thJuly.

On Wednesday morning I welcomed a former pupil of mine, Richard, into school to work with Mrs Burniston and a few Year 6s who will be taking on the technical roles for this year’s production. Richard, when he was in Year 6 didn’t want to be on the stage in the school play and so helped me on the lighting desk. Little did we know at the time that he would go on to make it his career and now he works at the Royal Opera House, Covent Garden making sure the technical side of all the major productions go according to plan. I wonder whether any of this year’s technical crew will follow a similar path? He is returning next week to talk to all the Year 6s about the theatre and putting on a professional production.

After school, I joined Bethany (Year 5) and Agnes (Year 3) in Mr Robinson’s band again. It wasn’t sounding too bad and the two Whitehill girls are fine musicians.

I had a free diary at 8.30am on Thursday and so I wrote a list. A list of all the jobs I needed to get done before the end of the day and were probably a little overdue. By 6.00pm, I think I had crossed off 10 of the 12 tasks listed… but added a further five. Oh well!

I sent out a letter on Thursday giving you information about a Parent Information Evening we are running on Wednesday 26thJune. The event, ‘Maths in Action’ will highlight how we teach maths mastery in school and will feature pupils showing off their skills and giving opportunities for parents to ‘have a go’. I hope you will consider joining us. Please indicate you will be attending by using our online booking system.

After enjoying Achievers’ Assembly on Friday morning, I headed into London for a meeting at Congress House on behalf of the NAHT.  The assembly was another enjoyable 30 minutes where we were entertained by Joshua on his clarinet and Imogen and Samantha playing their flutes. Our House Cup was presented to Air and this week’s Class of the Week is 5SS. We also celebrated football trophies for Ronnie and Joe (Year 5s), a swimming award for Dillon (Year 4) and a drama award for Euan (Year 5). The highlight of the assembly was the opportunity to announce that Poppy and Imogen (Year 5) had won a national poetry performance competition which will now see them perform at the National Theatre in London. What a fantastic and well-deserved opportunity! They had no idea they had won and so it was a true ‘golden envelope’ moment. This is a significant achievement and you could tell what it meant to the whole class as Isaiah couldn’t wait to congratulate the girls. Thank you for being a true ambassador, Isaiah! Mrs Beresford was keen to highlight the work of all Year 5s with this project and stated that all of the groups were of an exceptionally high standard. Both Mrs Beresford and I would like to thank Mrs Cornell and Mrs Small for their hard work in supporting this project and encouraging their pupils.

The meeting in London was interesting and fortunately not too long!

This weekend, the Friends’ Association will be hosting Happy’s Circus as our major summer event. I think the weather is set fair and I look forward to welcoming you all to the school for a fun afternoon and some great family entertainment. It’s been a great success in the past and I look forward to them returning. Thank you in advance to our amazing Friends’ committee for all their hard work in putting our summer event together.

Looking ahead to next week, we have a few key events. Staff will be engaged in this term’s pupil progress meetings and these are key at this time of the year, to review the progress the pupils have made in the summer term and also introduce the teachers, who will be teaching the classes next year, to their new pupils’ profiles. With this in mind, you will be informed of your child’s new class teacher(s) next Friday when their school reports will be coming home.

We have Inter-House football matches on Wednesday with teams from both Upper School and Lower School taking part in two separate competitions. On Thursday we have a Hindu workshop for our Year 4 pupils as part of their RE work.

I am out with the Senior Leadership Team for our final strategic planning day on Friday and during this meeting, we look to set up the year ahead. We consider support staff roles and key diary dates for the next academic year. When thinking about next year, I am sure you have seen the change to the May Bank holiday which has moved from Monday 4thMay 2020 to Friday 8thMay 2020. I will update the website and our calendar in due course.

That’s about it for another week. Let’s hope for better weather from tomorrow and into the new school week so we can get back to enjoying the summer term and I can try and finally catch Ailsa (Year 3) in a game of family tag! I’m bringing in my trainers this time!

Have a great weekend and I hope to see many of you tomorrow.