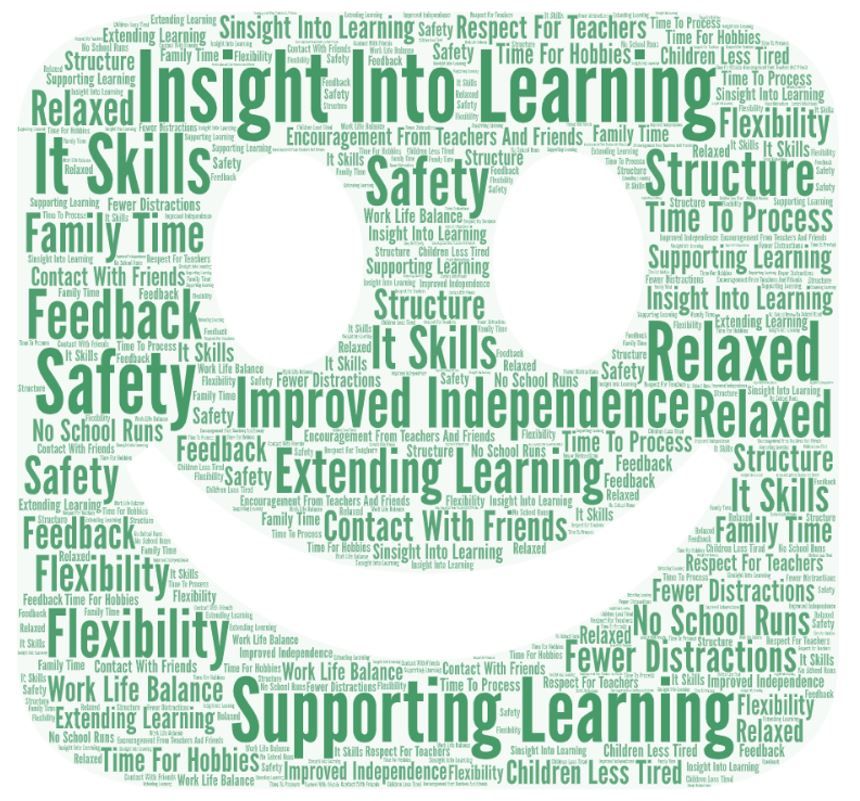 After one day of everyone in school and 29 days remote provision, we have reached the halfway point of the Spring Term. I know all the teachers would agree when I say that the coming week is going to be very welcome indeed and I think everyone – pupils and staff alike – is ready for a break. A break where, hopefully, pupils will refrain from too much screen time so they can recharge and refresh ready for when we return on 22nd February.

Thank you to everyone who submitted responses to the parent survey on our remote provision. The feedback really does help guide and inform future planning and even over the course of the last six weeks we have made several adjustments and adaptations to the way we have been working. I tweeted three summary graphics earlier in the week and have included them throughout this week’s blog. I will be presenting the full report to governors in the coming weeks and then will probably make it available on the school website if you are interested. We have also been collecting data from the pupils and seeing how this marries up with the parent feedback. Again, we were really happy when the largest word to appear in the word cloud for ‘What would you change?’ was ‘nothing’.

The school took delivery of seven more Chromebooks on Monday and these are already being put to great use both in school where the need is increasing and also at home. It will be interesting moving forward to see how we incorporate aspects of Google Classroom into our teaching when we return to normal; whenever and whatever that might be.

Last week, I told you about the clay lesson I took part in with the Year 3s. Over the weekend, we had several videos sent in as well as emails sharing the relative successes of pupils who undertook the make at home. Quite a few admitted it was more fun than they expected, which I believe translates to, ‘it didn’t make as much mess as we feared’. Silvia deserves a special mention, as not only did her ocarina work well – with different notes – she then shared a video of her and her mum doing a duet on ocarina and keyboard! Beethoven has never sounded so good! Silvia and some of her peers thoroughly deserved the Headteacher’s Awards they were given.

We awoke to more snow on Monday, and although it snowed for a long time, it didn’t snow much. Despite not being able to recreate the amazing snowmen of two weeks ago, there was certainly enough snow to make snowballs as I found out at break and lunch when I was a target of the Year 4s and Year 3s. Summer (Year 3) has a lethal throw on her… particularly from half a metre!

I have enjoyed seeing the pupils’ efforts with Mr Miley’s latest fitness challenge. Lewis (Year 5) is providing me with daily updates and I was very impressed with his mum’s ability to convince him that housework was classed as exercise. Ironing my shirts would surely count as a few extra miles if he wanted a challenge. The Baxters and the Blores have also been particularly impressive with their runs this week. I particularly liked the photograph of Jacob’s (Year 3) walk which features a second rate movie remake! Did you spot it when we tweeted it earlier in the week?

Harry (Year 6) showed that there is always time for learning additional skills during lockdown. A favourite of lockdown one made a comeback this week (no, not banana bread) but it was cooking. His full roast dinner looked delicious and I am hoping he will start taking orders soon.

The teachers have all drawn my attention to great work being completed as part of our virtual lessons this week. Eoin, Finley and Maya (Year 4s) produced some wonderful haikus which tied in very nicely to their earlier artwork. The pupils in the Year 4 critical worker pod were also keen to share their haikus with me, all of which were presented beautifully.

Other work worthy of a shout out this week has been from our Year 5 pupils. Ailsa has been a natural in front of a camera and has submitted films about rugby and then reappeared as a characterisation of God to retell the creation story. Freya, her younger sister and not yet at Whitehill, received a Headteacher’s Award for her part in the film where she received ‘best supporting actor Oscar’ for her portrayal of the sea and the land amongst other things!

Ruby C also received an award for her film of the creation story. She chose to present it through the medium of dance and it really was very special. Both Miss McGurk and Mrs Cornell sent me links to ensure that I saw it. I also enjoyed Agnes’s version of this story which was presented through a carefully narrated construction of a Lego model.

Before Christmas, you may remember me telling you how much I enjoyed the sign language club Mrs McKenna was running. I was delighted to see that both she and Mrs Vernon are getting our Year 3 critical worker pupils to learn some BSL whilst they are in school. It is such a useful skill to learn and I can’t wait for the opportunity to learn more when we are fully open again.

‘Biscuits with the Boss’ this week have been really enjoyable. Again, the conversations have gone in a whole variety of directions but all have been hugely entertaining and I hope beneficial for the pupils to have that small group social interaction with some of their peers and also with me. The Year 3 group showed me how to change backgrounds on my meeting and so we all ended up in space at one point. The five Year 6s who showed up on Thursday afternoon were terrific; we took time to talk through the remainder of this year, secondary school choices and also West End musicals. Remember when we could go to the theatre?!

On Friday, we made a conscious decision to remove screen time from the pupils’ remote education. Whilst there was still the opportunity to ‘touch in’ with the teachers during the day, the tasks set were all achievable without the need to stare at a screen.

The subject of screen time has been discussed at various levels and within various groups. I am happy that our remote offer does ensure pupils are not glued to a screen for five hours a day and therefore we don’t need to find regular sessions each week to break from this like some schools might be doing. Where I believe the increase in screen time comes from is through the leisure activities which many children engage in at the moment which are also screen based. As I said right at the start of this blog, I hope next week will allow pupils the time to get outside and get some fresh air.

I did visit each of our critical worker groups to see what they were getting up to although I couldn’t find our Year 3 pupils before break as they were out and about in the school grounds collecting for one of the planned projects. The Year 4s were making their own Roman Shields thinking carefully about the specific designs on the front. I did wonder why cardboard boxes kept being taken down to the Year 4 classroom.

There was an extended break for the pupils in school to take advantage of the dry weather. What started as a friendly ‘kick about’ with the Year 4s soon became a match – Teachers v Pupils. The teachers’ team was made up of Mrs Burniston, Mr Miley and me. It gives me great pleasure to report that we won and even more pleasure to state that no one was injured!

When we return after the break, we should find out a little more about the plans for allowing more pupils back into school. I really have no idea what this will look like. I can see the benefit of getting everyone back as soon as possible but worry that if it’s handled incorrectly, we could head towards another future lockdown which really must not happen. What I have learned is that it is pointless to try and second guess what might happen; so I won’t. As soon as I hear, I will let you know.

Thank you all your support this term. Thank you for the edible treats! Thank you too, to #teamwhitehill who have adapted their teaching to provide continuity for the pupils in terms of curriculum delivery.

As I bring this week’s blog to a close, I was going to wish my parents a happy (55th) wedding anniversary but fear if I did, my dad would say something along the lines of ‘he’s spent longer reading my blogs that being married to my mum!’ I’ll save him the bother (and will let you know if he moans in any other way).

Have a great weekend and a restful half term.