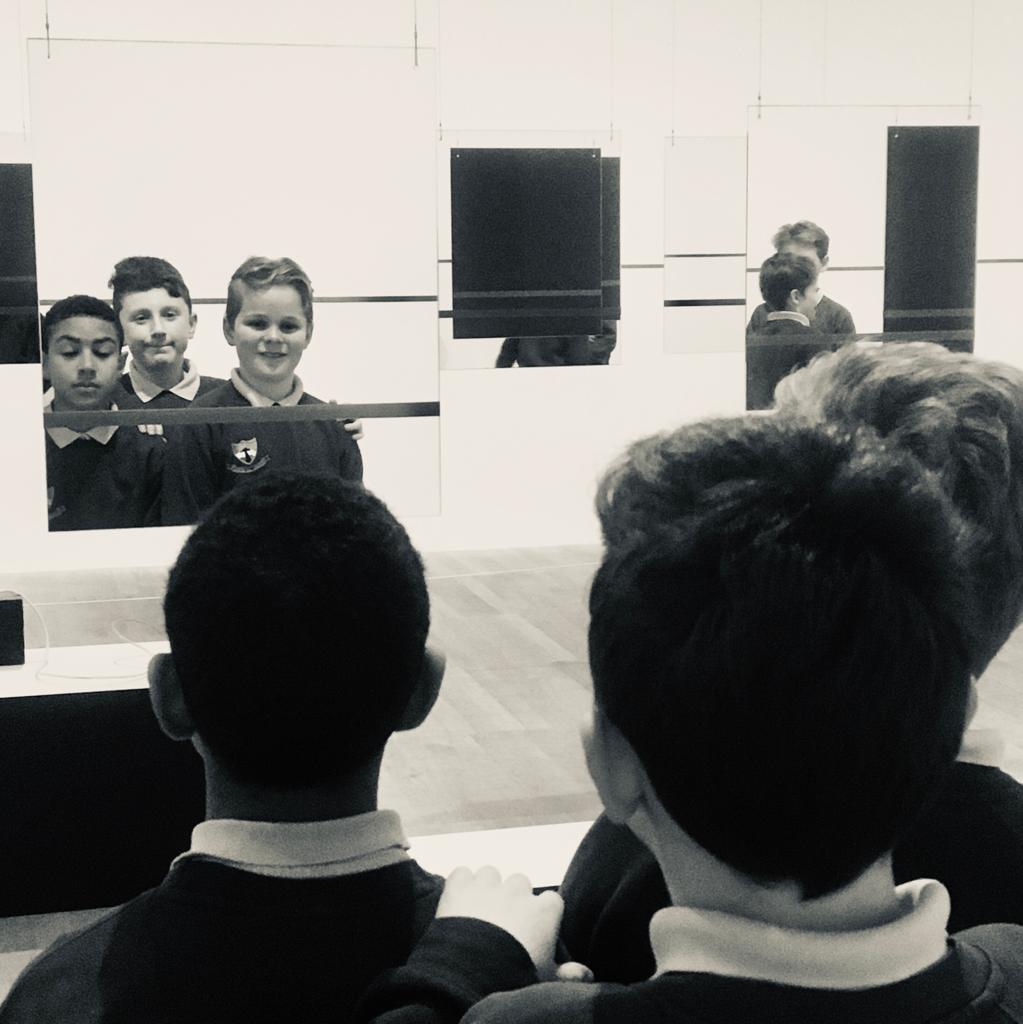 It was an early start on Monday, as the Year 6s headed off to London for a day of politics and art. The coach was away just before 7.00am which ensured they were at the Houses of Parliament in plenty of time. Having done this trip myself, there is nothing worse than cutting it fine with timings as you run the risk of missing out on the tour. The pupils had a great morning and were able to visit both the Commons and the Lords as well as some of the surrounding rooms. They also met up with our local MP, Bim Afolami, who spoke and answered questions, which Mrs Bailey and Mrs Bryan both reported as being ‘mature and challenging’. Bim emailed me later that evening stating, “I absolutely loved seeing your pupils – extremely good questions. Very sensible boys and girls.”

After their morning in Parliament, they headed off to Tate Modern for an afternoon of culture and art. Hopefully you saw some of the photographs of the pupils locating and appreciating the works of art. Mrs Bailey used all her artistic skill to capture some great images of the pupils (as did the other staff of course!). It is such a big gallery, the Tate Modern, and as such is impossible to see it all but the pupils enjoyed themselves nevertheless and were back slightly earlier than planned. A great day!

I spent a large amount of time in Year 5 on Tuesday afternoon. It was the second of the science sessions being run by Mr Goldring from Hitchin Girls’ School. Before Christmas, he spent time with Year 6 looking at electricity. This time he was doing some biology linked with the pupils’ current topic and so they were looking at the heart. The pupils got to handle and explore (and dissect) a (sheep) heart. I found it fascinating, as did the pupils I believe, even if some were a little squeamish when first presented with the heart to hold. I think a few were a little disappointed it didn’t quite look like that beautifully symmetrical bright red ‘heart’ but Mr Goldring explained where this misconception comes from. He is back in one more time later in the year to deliver another practical. It’s a really good example of collaboration between our two schools.

I had a really productive meeting on Wednesday morning with Wicksteed, the company who will be replacing the wooden play equipment on the school field. Fingers crossed the project will be started at the beginning of March and so as the weather improves in spring, we should be able to get full use of this area of the school. Mrs Cook was able to join me for this meeting and it has been lovely to see her pop in for a few hours this week. It will still be some time before we are back to full strength in the school office and so I would like to thank you again for your continued understanding and support. I would also like to thank Mrs Lanni for all her hard work in keeping the office functioning and keeping me sane!

We had a visit from ‘Power of Uke’ on Wednesday afternoon. The main reason was to deliver some CPD to the staff team after school but we also made use of their expertise to spend some time with our two Year 6 classes as they continue to learn the Ukulele in their music lessons. The staff session was fascinating on a number of different levels. When I was a class teacher, I used to find it interesting to see my pupils being taught by someone else as I got to see the way they work and engage from a completely different perspective. As a Headteacher, it is similar when a visitor comes in to deliver CPD to my team, particularly of this nature. She used the process of teachers learning to play the ukulele as a way of showing how our own pupils might cope with, struggle with or engage in their own learning. Very, very powerful. And, as if that wasn’t enough, I also got to play the music for and sing a song in two parts! I’ve always wanted to sing in a choir which was singing in parts. As a musician, I find it particularly frustrating that I am such a lousy singer! She must have been a good teacher!

On Thursday morning, I was in Cambridge for a Regional NAHT meeting. It was great to hear from our National President on the key educational matters of the moment. They key issues haven’t really changed much but since the general election, the way in which the professional associations engage with the government has. I still hope that the planned visit from the Secretary of State for Education, Gavin Williamson, will be rescheduled after it was postponed in November.

When I got back to school, I did visit a few of the classes to see what they were up to and was particularly impressed with the textiles work in Year 5. I also met with Zack D (Year 6) who had written a brilliant poem based on the Holocaust. He certainly deserved his Headteacher’s Award. The final impressive news of the day was the feedback from Mayan Class after their swimming session. A perfect 10, 10, 10!

We started Achievers’ Assembly on Friday morning with music from Monty who played the drums. Music at the end was also on the drums with Dillon. Both boys were awesome! Earth and Fire both won the House Cup as they tied on the same number of points. Class of the Week is becoming increasingly more difficult to award as all classes are clearly working really hard and their teachers are full of praise each week. Apollo Class won it this week but I thought I would share with you some of the comments written about the classes this week.

“Mayans have had another incredible week!”
“SO PLEASED! Continued to a second incredible week where we have all been challenging ourselves…”
“Really pleased with their attitude to everything this term…”
“Yet again, another brilliant week…. In every single lesson every member of the class has challenged and pushed themselves.”
“Another fantastic week… Outstanding ambassadors for Whitehill on our trip to London. Awesome Wilde Class.”
“Amazing! An outstanding week in terms of engagement. Empathy and understanding of Holocaust topic. SO PROUD!”

Tomorrow, our trampolinists are competing in the Zonal Finals of this year’s school competition in Cardiff. I am not able to be there this year and so hopefully we will be kept updated by the parents. I’ll make sure I retweet any photos and results. Good luck team!

Looking ahead to next week, I am out on Monday afternoon supporting third year student teachers form the University of Bedfordshire as they prepare for their first job interviews. It’s lovely to support them and give them a few pointers as they prepare to impress their future employers.

The highlight of my week (not!) has to be the training I am doing on Thursday morning. Asbestos! A necessary aspect of my health and safety role but it’s hardly the most inspiring of mornings.

Next Friday, Mrs Beresford and I will be meeting with two of our governors in the morning to talk through aspects of our monitoring work and I am pleased they will be able to join us for the Achievers’ Assembly. In the afternoon, I am meeting with different governors as we look through proposals for the after school provision we want to introduce at Whitehill in the coming months.

Before finishing this week, can I draw your attention to a future event? Back by popular demand (yes, really!) is the staff murder mystery evening. A play has been selected and we will begin rehearsals soon. Keep Friday 13th March free and look out for details of tickets going on sale.

That’s it for week two, I’m off to play football for Herts Heads. Have a great weekend.