Thomas is a Wizard!

Thomas is a Wizard! 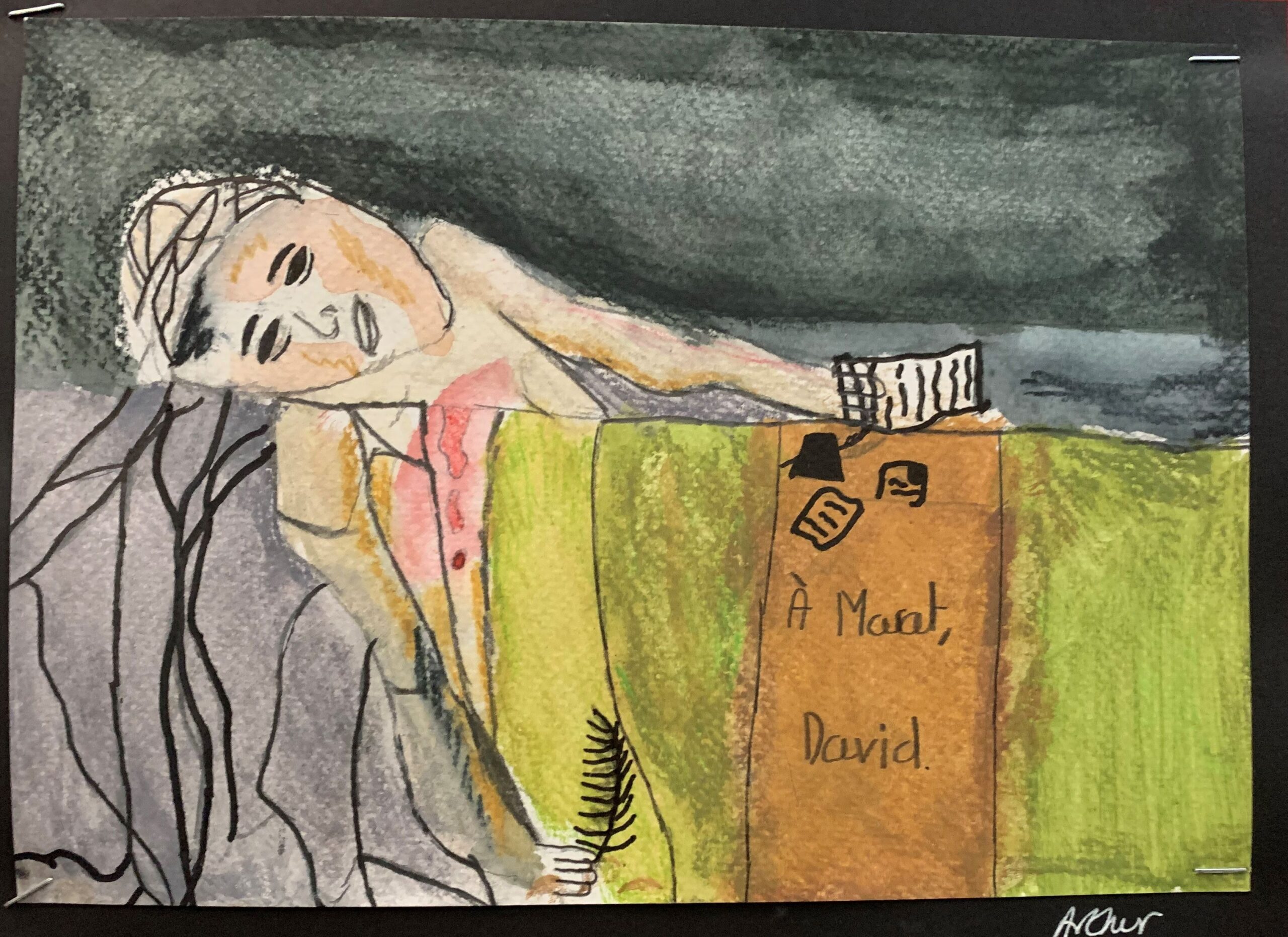 Well done, everyone. We have made it. Not only that, but we have made it to half term with our bubbles intact! Thank you to each and every member of our school community who have helped with keeping the school as safe as possible for our pupils and teachers and for all the support you have shown over the first eight weeks.

I have been particularly busy this week but have still found time to chat with pupils about some of the work they have been doing and have been impressed by the number of pupils who have been singled out by their class teachers for their continued and sustained effort. Charlie and Helena (Year 6) from Kahlo Class brought me their topic books to look through. There was some great history work and a secure understanding. Seeing or reading pupils’ work is only half of it; it is even more exciting (and informative) to listen to the pupils then talk about it. This shows a deep understanding. Bea (Year 6) was also sent my way for her sustained effort with spelling homework this half term.

Our Year 3s ventured out again on Monday and took part in a local history walk which saw them visit the library and also the museum. I talked about enrichment opportunities in last week’s blog and this is one such example. It was a very productive morning and all members of staff were very positive about the trip. Feedback from the pupils themselves suggested that the walk back up Windmill Hill tired a few out but they were back in time for lunch and that reinvigorated them ready for the afternoon lessons. Aztec Class have based their class display on their trip, which includes a footprint route showing you each step of the journey.

I was visited by a group of five scientists from Orville Class at the beginning of the week. I say a group of five but it was actually four pupils and a Chromebook! Ed was working from home and joined the day via Google Meet but he was a fully integrated member of the group. They wanted to show me the results of a science experiment they had been working on looking at the effect different drinks would have on your teeth. They could all explain to me about the problems of natural sugars and also acid; very thorough knowledge. The other aspect of the conversation I want to share with you is not about the scientific content. I was so impressed with the group I wanted to award Headteacher’s Awards but I also knew the other pupils from Orville Class had worked to a similarly high standard. Dilemma… should I present awards to this group or one to the whole class? When asked, Edward was first to tell me not to give his group one, but that the class all deserved one. Of course, with such an awesome attitude, I did both. Well done, Edward, I was very impressed!

This week’s Millsy Monday assembly was with Year 5. We celebrated some of the year group’s achievements from out of school and were then treated to a magic trick from Thomas C. In advance of the assembly, to ensure the trick ‘worked’, Thomas had shown it to me and it honestly blew me away. It was real magic! Often, when a pupil shows me a ‘magic trick’ I can be very enthusiastic but can tell how it was done. With Thomas’s trick I genuinely couldn’t work it out. I was determined to watch even closer when he showed it to the year group in assembly but failed miserably. There is no doubt about it… Thomas is a wizard!

It has been lovely this week to see the displays going up in the main corridor of the school. These displays highlight some of the work each class has done this term. I have already mentioned Aztec’s display but there are other great ones too. I have included some photos throughout this blog but will ensure we tweet them all at some point so you can see the quality of work being produced.

On Tuesday and Wednesday evening, we had two further consultation evenings using the online platform. On the whole, I have been delighted with how these have gone and we had over 95% attendance. Where there were a few teething issues, it tended to be ‘driver error’ but teachers added extra slots or made calls home to remain in contact. I have no doubt this system will be used again next term and judging by some of the feedback we received, you would be more than happy for this to be the case.
“Brilliant, fabulous parents evenings. All worked really well. Thanks very much to all.”
“What a fab system! Well done. Two parents evenings done, on time and at home… thanks so much to… an amazing school.”

The poncho came out again this week for my morning gate duty as Wednesday was a complete wash out. To lose both break and lunchtimes to rain makes it quite a challenge for pupils and teachers (particularly in the last week of the half term) but all was good and we got through it!

Lena (Year 6) was our musician at the start and end of this week’s Achievers’ Assembly; she played the piano beautifully. There was lots to celebrate including Roisin, Mya and Aisla (Year 5s) who, last weekend, took part in a sponsored cycle ride raising money for Garden House Hospice. Mrs Small shared the athletics successes from our Year 3 and Year 6 Activity Afternoons. It included Evie (Year 3) who reached the Year 4 (Yes, FOUR) ‘gold’ standard in the 400m. Lauren and Karolina (Year 6s) also achieved the ‘gold’ standard in all the events they took part in. Our House Cup was awarded to Air House this week but it was impossible to separate the classes for Class of the Week.

It was such a positive set of feedback from the teachers across all eight classes that I asked other staff members to give me a hand to decide. Comments from the teachers included:
“Yes! Yes! Yes! Even in the face of exhaustion, every member of the class has excelled…”
“An outstanding final week; the class were brilliant…”
“Week 8 and not once have they let themselves down…”
“Wow! The whole class has shown their very best this week…”
“An amazing week… I was blown away by my entire class and their diary entries…”
“Since the 2nd September, they have been brilliant…”

They only option in the end was to present it to two classes and they were Kahlo and Wilde Class but as I have already mentioned, Orville were up there too and deserve a special mention, if for nothing else other than Mr Denney’s ‘dress down day’ costume! He certainly embraced his inner ‘wackiness’!

On that note, thank you to everyone who joined in and supported the Friends’ Association’s first event of this year. Thank you also to Mrs Bailey for the loan of her shoes!

This term has seen the school being able to offer its own after school provision in the form of Cookie Club. From the feedback I have received and in chatting to the pupils who attend, it is certainly proving to be a success. I am so pleased we went with this Nikki, Sheila and their team and look forward to many, many terms in partnership. Less permanent has been the addition of our ‘non-breakfast, breakfast club’. Again, this has been a success and provides that additional support for some of our families. We are not charging for this but as I mentioned right at the start of the term, when we launched this facility, if any families who have made use of it would like to make a donation, I will add the money to the budget for the new sound system in the school hall. Thank you again to those of you who have already done so; I hope it has helped with the morning routines.

As we reach the end of the half term, there are a couple of reminders for you before we look at events for the first week back.

Firstly, for parents of pupils in Year 6, please don’t forget that secondary school choices must be made by October 31st. Also, please make sure you select your meal choices from when we return after half term. The updated menu is there and you can book several weeks in advance.

So, when we return, on Monday 2nd November, there are one or two events in the diary worth sharing with you.

We will be selling poppies again this year on behalf of the Royal British Legion. We will be selling them each day but will need to specify a different year group each day. If your child would like to buy and wear a poppy in school they should bring in a contribution on the appropriate day:
Monday – Year 3
Tuesday – Year 4
Wednesday – Year 5
Thursday – Year 6

On Monday 2nd, the Year 4s have their dinosaur workshop to look forward to. We will be sure to tweet some pictures. On Wednesday 4th, pupils in Upper School will have their flu vaccinations. On Thursday, Orville Class go swimming (at last) and Friday is the deadline for the annual whole school poetry competition. Pupils received information relating to this today.

Finally, I have posted a couple of letters on the school website letters’ page relating to a special offer for Whitehill families if they were considering purchasing their own fireworks this year. A professional company who support our science week with demonstrations relating to pyrotechnics are branching out this year and I said that I would pass on the details.

That’s it for the first half term. I have already phoned my dad in anticipation of the moaning he will do having read this blog but to quote his tweet from early in the week, we can’t help being ‘a can do school’.

Have a great half term break and stay safe.