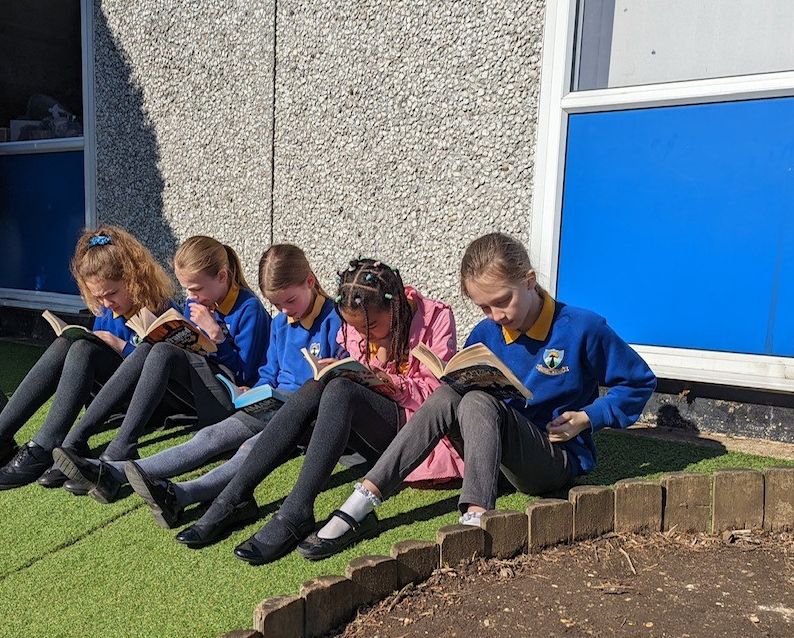 Let’s start this week’s blog in Macclesfield last Saturday. I often joke about Macclesfield in reference to the darker days of my beloved Manchester City, but this visit to Macclesfield was for the joys of a National Final.

On Friday afternoon, Mr Lord and Miss Edwards, together with parents and pupils from our three trampoline teams made their way ‘up north’ ready for an early start on Saturday. A tradition from previous overnight stays in this competition saw many of them enjoy a pre-competition meal which is always good for morale. They couldn’t be too late to bed however, as the first team were due to start around 8.30am on Saturday morning.

All three teams did very well indeed. Just to qualify for nationals is an achievement but Mr Lord and Miss Edwards said all of the girls can be extremely proud of their scores and with the majority not in their final year at Whitehill, the potential for silverware next year is looking very good indeed. It was lovely to see former Whitehill pupils representing Hitchin Boys’ School and Hitchin Girls’ School do very well too with several national titles won for their respective schools.

Whilst talking about former Whitehill pupils, it was amazing to see Harry, Tristram and Mattias represent Hitchin Boys’ School at Twickenham on Wednesday, in the Under 15 National Vase competition. As the final was live-streamed, many of our classes tuned in to watch and cheered along when the boys won. Well done to all concerned; we are all really proud of their achievements which also saw Mrs Cornell’s baby daughter Emmie attend her first rugby match as she was there supporting her dad who is Head of PE at HBS.

Phase were in school again on Monday working with our Year 6 pupils. They do lots of great work supporting pupils and in particular pupils who, before we know it, will be moving onwards and upwards to their new secondary schools. They will return a couple more times before the end of the year.

It looked like it was going to be a very busy week on the sporting front but unfortunately the weather gods were not kind on Wednesday; the day we needed the sunshine we’ve enjoyed on every other day. Both the ‘B’ team netball rally and the boys’ Wix Cup finals night were postponed but I know Miss Gooderham and Mrs Bryan have already booked in new dates. Couple this with an earlier netball match postponement and we were left with an indoor athletics competition.

Miss Gooderham, with the help of some parents, took a team of athletes to Highfield School to take part in the event and reported that the pupils all did well, with the girls finishing third overall and the boys, fourth. The combined score meant we finished third overall.

We do have one more sporting event this week and that is the ‘A’ Team netball rally which takes place tomorrow morning at Whitehill. I shall be opening up early to ensure the school is ready to welcome teams from across Hitchin. This is the first time since 2019 that we have been able to hold this competition and I know all the schools are looking forward to it.

I have had a couple of trips out again this week in my role as a trustee of Hitchin Girls’ School. I had a lovely morning on Wednesday as classics link which saw me observe lessons in Year 9, Year 10, Year 11 and Year 13. I did ‘O’ Level Latin (back in the day) and it was great fun trying to remember some of the vocabulary. I have already mentioned former pupils in this week’s blog and obviously they were in some of the lessons I visited this week. The problem I had however was that I failed to recognise some of them. It wasn’t until later when I saw class lists, for example, did I realise just how many I should have recognised. One such student, Astrid, visited Whitehill on Thursday as a Sports Leader and so I was able to apologise to her. Fortunately, she did let me off!

I had a late night on Thursday as it was this term’s full governing body meeting. We covered the usual business but not before the Junior Leadership Team spoke eloquently about one of their pledges, the Eco Flag Award. They are progressing well on this front but as part of the process, they need to share their news with other stakeholders and so what better stage, than our governors. I was very proud of them.

In the absence of Josh (Year 5) who was due to provide the music for Achievers – don’t worry, he will be at the keyboard on Monday – Eddie (Year 6) stepped up again for me. We celebrated lots as always, including George (Year 4) who many will have seen finished third at Crufts with his obedient and agile companion, Jasmine.

It was the time of the term where we presented our ‘Wall of Fame’ awards. Three pupils in each class were awarded certificates for work in English, maths and science. Those of you visiting the school for our open afternoon on Wednesday will be able to see the latest recipients, as their photos will be displayed proudly near the school hall.

The House Cup this week went to Air with the Wombles making their way to Apollo. Class of the Week this week awarded to Lamarr. Well done, all.

The final exciting news shared during our celebration assembly was the fact that ‘Team Voyager’ have progressed through to the finals of the Year 5 Maths Challenge I mentioned last week. The finals will take place on Wednesday 20th April and we will be sure to let you know how they get on.

Looking ahead to next week, we are being visited by our Improvement Partner on Tuesday who continues to work with me and my team. At the same time, the Year 4s will be enjoying a Roman workshop. This could prove to be a bit of a challenge as the afore mentioned Improvement Partner’s favourite subject is history. We might never get him out of the hall!

The diary looks pretty full all week for me with several NAHT meetings to attend both in person and via the joys of ‘zoom’.

I would like to remind you that we have an open afternoon on Wednesday from 2pm. Parents and carers are invited to come in and have a look at their children’s classrooms as well as other areas of the school. This is the first time we will have been able to fully open our doors like this for over two years. I will write separately to add a little more detail to proceedings in due course.

Finally, I mentioned Lydia’s book last week in my blog and I have now got the link should you wish to have a read and download it onto your Kindle. She would love to read some (very kind) reviews.

Heidi Wood and the Electric Blue Stone by Lydia Evans

I think that is it for this week. Even if there were more, I really should stop given the insults sent in my direction from my dad after the length of last week’s blog.

Good luck to the netball team tomorrow. I will try and keep you updated.