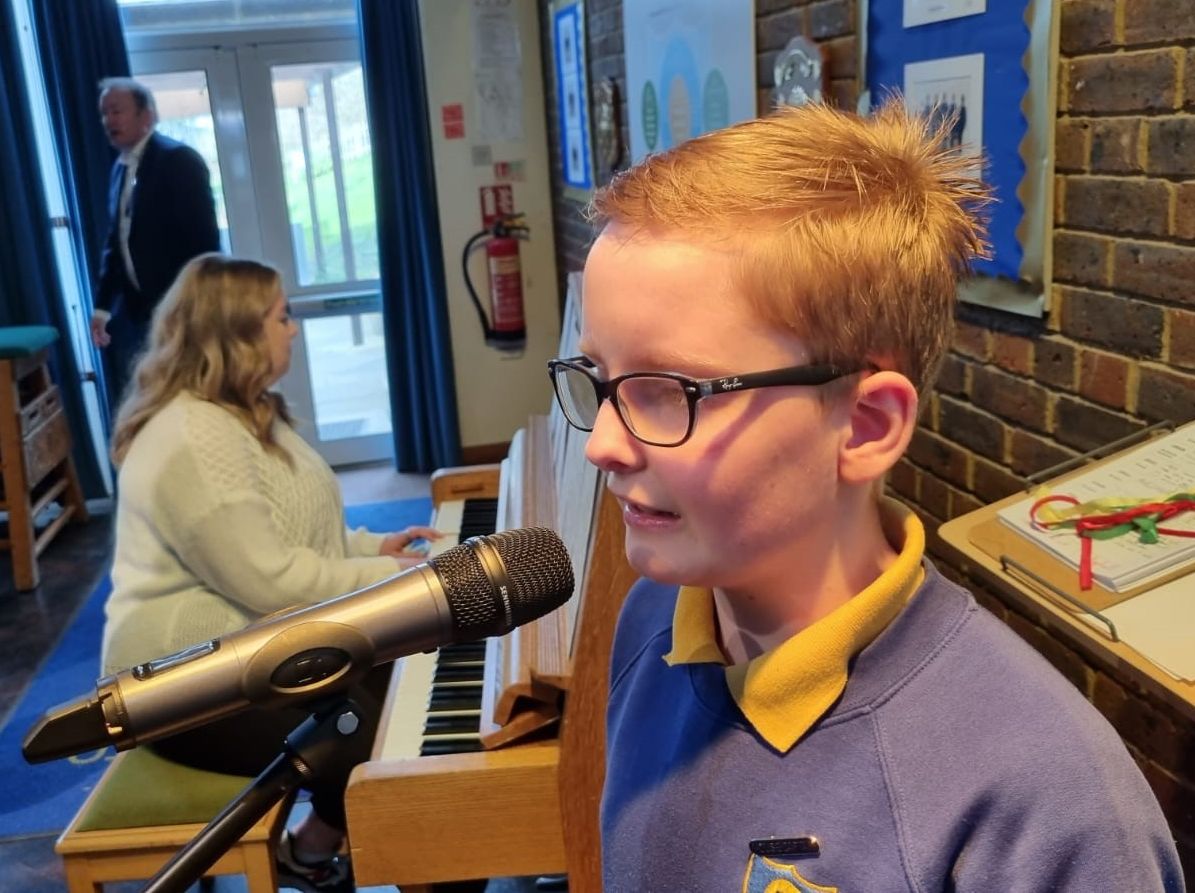 I have enjoyed a very productive week; I haven’t been as visible around the classrooms (which the teachers might say is a bonus) but I have managed to get a lot of ‘stuff’ done. Of course, I would never hide completely and my diary did include visits from people who I was keen to show around the school and meet the pupils.

Thank you to those of you who contributed to the Friends’ Association ‘Bags to School’ collection on Monday morning. Thank you too to Friends’ Committee who continue to be proactive and productive organising different events to raise valuable funds for both us and Highbury Infants.

I have mentioned before the amazing work Miss Gooderham does in ensuring as many pupils as possible get to represent the school in a sporting fixture – if they want to. I know by trying to play ‘dining room Tetris’ every lunchtime, just how many pupils attend the different clubs on an almost daily basis. On Monday after school we had a Year 5 girls’ football match against a very tall St Francis team. Our young team did very well against predominantly Year 6 opponents with a special mention going to Isla and Eva who impressed me from my vantage point on the bank.

A day later, a different team of girls took part in the Wix Cup final against William Ransom. Although I was in and out of a staff meeting, I did manage to watch some of this game too. Our opponents (which included the cousin of one of our players) were a very good team and deserved the win. We wish them well as they represent the district in the next round.

Earlier that day, I welcomed the National President of the NAHT (National Association of Head Teachers) to Whitehill. Regular readers will know that I do work for this professional body at county and regional level and so it was nice to have Tim Bowen visit the school. I did have to keep pointing out to Mrs McConnell Smith that it was Tim and not Jim and so impressions of a well-known 1980s darts quiz show were not appropriate! ‘Stay out of the black…’ and other such favourites!

We chatted and then enjoyed a lovely tour of the school. Our class reps were awesome and the classes were all so productive. He emailed me later and said, ‘I so much enjoyed my visit to your excellent school.  Having not been inside a school for over 4 months, it was great to finally be back in a school environment.  It was really good to meet… your pupils and staff.’

Tuesday saw the arrival of the eggs ready for the life cycle work in Year 5. The company we use, the Happy Chick Company, provide all the equipment and more importantly guarantee all of the chicks are rehomed when they are collected at the end of next week. We learned that last year’s chicks ended up in Nottingham. There was no action that afternoon nor whilst I was at a governors’ meeting at Hitchin Girls’ School that evening; Miss McGurk set up a live feed so that we could watch from anywhere.

During the night, however, they did start to hatch and continued to do so throughout Wednesday. When I couldn’t sleep, it gave me something to watch and made a change from trying to count sheep. I just had to make sure my camera was off when I logged onto the Google Meet!

I have a weekly ‘zoom’ meeting with my Chair of Governors, Dr Wendie Ray, every Wednesday afternoon but this week it was in person. We decided to ‘walk and talk’ and again find out what was going on in each of the classes via the class reps. Another lovely experience. I was particularly impressed with some topic work in Year 3 where pupils were looking at social hierarchies within Mayan and Aztec society. They could all explain what they were learning and deserved their Headteacher awards.

After school, we had netball matches against Ickleford with both teams winning and appearing to find their form in advance of the upcoming netball rallies. It will be the first time since 2019 that we will be competing in these tournaments (for obvious reasons) and we have agreed to host both of them.

At the same time, two Year 5 teams were competing in a different form of competition – a county-wide, virtual maths challenge. At the time of writing, we are unaware of the overall results but both Mr Wells and Miss McGurk who were listening into the discussions reported that the teams did well. Mrs Small has received some specific feedback which was amazing, including full marks in one round for one of our teams and also one of the highest ‘estimation round’ scores of the whole competition. As soon as we hear more, I will let you know.

We had a lovely treat on Wednesday when former pupil, Lydia, visited the school to say hello and also to present us with a copy of her first novel. Now in Year 7 at Hitchin Girls’ School, Lydia’s goal was always to be a published author and it was so lovely to see this dream fulfilled. I have read my copy of her book, ‘Heidi Wood and the Electric Blue Stone’ and I am so impressed. Well done, Lydia!

The weather has actually started to improve, although these could be famous last words. It improved enough to allow pupils onto the field at lunchtime. We have so much space and it is always lovely we can allow the pupils to use it in their free time.

There were more pupils out representing Whitehill on Thursday after school. We had a Year 4 dodgeball team taking part in a festival at Knights Templar School in Baldock. Our Year 3s have also been practising with Mr Lord at lunchtimes and will hopefully get a chance to represent the school soon.

Across the week, I have had several chess matches with Henry (Year 4) and Liam (Year 5). They are both very good players and I really enjoyed the challenge. I can report that I did not win all the games I played and so a rematch is on the cards for sure!

As you can imagine, with all of these sporting events to celebrate, Achievers’ Assembly was a mammoth affair on Friday morning.

In addition to celebrating the many successes already mentioned, I presented Ailsa (Year 6) with her winner’s medal for the Chest Push event in the district indoor athletics competition which has been held virtually over recent weeks. She had no idea she had won and it is lovely to the surprise pupils in this way. Well done, Ailsa!

The Wombles are heading back to Orville Class today and Mayan Class were presented with Class of the Week. The House Cup was awarded to Water House. Well done to everyone who was celebrated in today’s assembly.

Surely one of the highlights this morning was the music. Oliver (Year 6) has been working on a couple of songs in recent weeks and performed both for us today. He sang Stars from Les Miserables accompanied by his singing teacher, Miss McConnell Smith on the piano. He also sang You’ll Be Back from Hamilton, accompanied by Eddie (Year 6) on the piano. Both songs have been filmed and now shared via Twitter as well as here. I hope you get to watch as they are really quite special; he even got a standing ovation when he finished. We have some truly talented pupils (and staff) at Whitehill!

Later today, Mr Lord and Miss Edwards will be driving North with three teams of pupils in preparation for tomorrow’s National Trampoline Finals. We wish them all the very best and I can’t wait to hear how they get on. Unfortunately, a pre-commitment for my wife’s birthday means I am unable to attend this time around. Apparently a night in a Premier Inn near Macclesfield was not something on her birthday wish-list! (But a trip the theatre is!)

The school diary doesn’t look any clearer moving into next week. I have meetings scattered throughout the week; some in school and some through the medium of zoom.

There are quite a few sporting events which, as we head towards the Easter break, start to include finals and tournaments. We are hosting netball rallies and football finals and then heading over to Highfield for an indoor athletics heat.

Another block booking for next week are our pupil progress meetings. These are an opportunity for class teachers to meet with members of the leadership team to review progress of all our pupils. Assessments being carried out this week will form part of the discussions but not the be all and end all. There is more to being a pupil at Whitehill then just test results.

One other thing I would like to mention, not directly linked with Whitehill is to wish the Year 10 Rugby Team at Hitchin Boys’ School all the very best as they will be taking part in the National Final of the School’s competition which will be held at Twickenham; the home of English rugby. There are a few former Whitehill pupils in the squad and I am hoping to watch the match as I believe there are plans to show it live via a social media platform.

And finally, our Eco Committee are working on their Eco Flag award and each week will tweet an energy-saving suggestion for you. I have promised (when I remember) to include them in my blog. This week’s tip is:

Flip the switch, turn the light off when you leave the room. (Brought to you by the Eco Committee.)

That is it for this week. A long one; but there is so much to celebrate. I will let you know how many insults I receive from my dad!