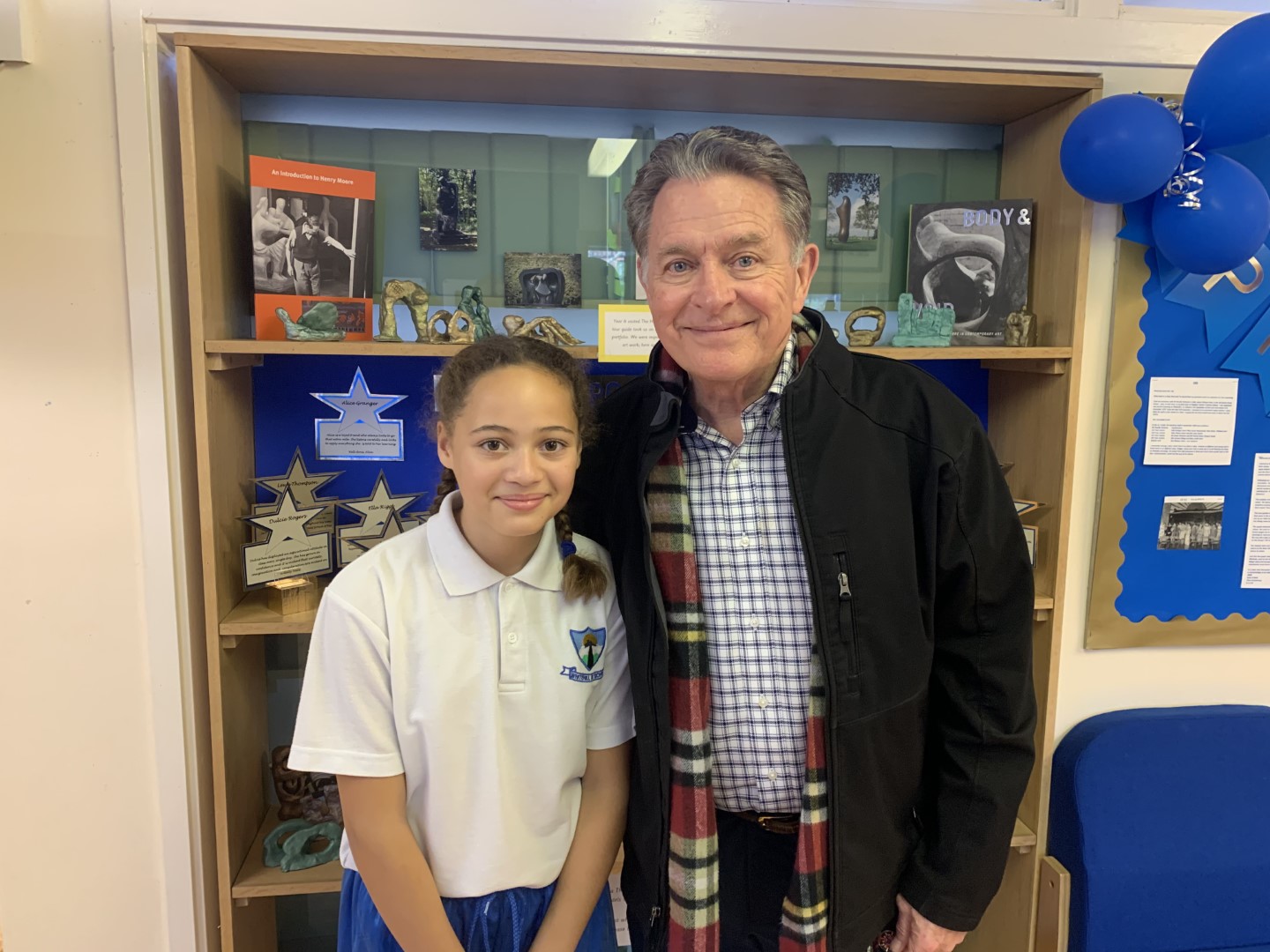 “I am pretty good at sizing up culture. I observed a great one at your school which showed high expectations, kindness, professionalism and a complete understanding of the larger purpose and responsibility of developing students for success in all parts of their lives.” Lee Cockerell – Executive VP (Retired) Walt Disney World ® Resort.

I can think of no better way to begin this week’s blog than with this quote, one of many, from Lee Cockerell after his visit last Monday. It was a wonderful opportunity and experience on so many levels and is still being talked about in school and also amongst others I have come into contact with who heard about his visit.

The day started with Head Girl, Poppy (“a star student”), accompanying me to pick up Lee from Hitchin Station as he was staying in London. He actually landed in the UK late Sunday night from the States. After a quick lesson about the history of Whitehill and our values, Lee spoke with the pupils about his work with Disney, giving them key lessons in  how to approach their work and school in general. “Work hard now to make life easier as opposed to taking the easy route now which will make life harder!” was one such message. He answered their questions and we found out that his favourite character is Tigger! Another key message shared with the pupils about skills needed for success was very simple and consisted of just two words. “Empathy and discipline.”

After joining with us in a minute’s silence at 11.00am, Lee, Wendie Ray (Co-Chair of Govs) and I spent time visiting the classrooms and chatting with pupils. Our Class Reps were on top form and sprang into action sharing their thoughts with us and explaining what they were doing. Chloe and Spencer in Orville Class (Year 4) would have spoken for hours, as would Edward C in Aztec Class (Year 3). A group of pupils enjoyed a treat at lunchtime by eating with our special guest. They chatted about things of interest and Lee shared his thoughts and told them a little more about his family and his work.

“[It was] good to see the students working in teams to learn how important it is to work together. Lots of subtle leadership and management and communication skills being taught with that approach. [They were] having fun in all the learning activities. Fun is a great way to learn.”

The final part of his visit was what I particularly found valuable, and that was a chance with Mrs Beresford and two governors to listen, to pick his brains and learn from his many years of experience and success. He was so generous with his time and so open and honest with us. As with all really enjoyable experiences it was over all too quickly and it was time to take him to the station to catch his train back to London.

“[I was] very impressed with the maturity and behaviour of the students, especially their ease in speaking, asking questions and their overall curiosity.”

Lee’s visit was four years in the making and began after I first read one of his books on leadership. Feeling an affinity with some of the key messages in his book, I emailed him and he shared with me some other research worthy of reading. Between then and now, he has visited the UK a couple of times, but clashes in diaries meant I wasn’t able to get to hear him talk. Determined not to miss out when I heard he was returning to the UK, for three days this week, I invited him to Whitehill to show him how I have embraced his ideas in the way I lead at Whitehill. If you don’t ask… Anyway, the rest as they say is history!

Before moving on, I will share one final quote which appeared on a public online post he made the following day:

“I had a very inspiring day yesterday with the students… staff and Headteacher at the Whitehill Junior School… This is one of the most outgoing and mature young student bodies I have ever visited… There is a major focus in this school on developing the students academically and as future leaders.”

The one downside of Lee’s visit on Monday was the fact that our Year 5s were unable to share in this experience, as they were beginning a week of space related activities by visiting the National Space Centre in Leicester. It was another successful outing, taking the learning beyond the school grounds. This learning then continued on Wednesday when Apollo and Voyager Classes (now you see why they chose these names) had the opportunity to go into space themselves when they all took part in a virtual reality experience. It was funny watching the pupils become completely immersed in the experience. Some of the staff had a go at lunch and after school (including me) and tried some of the other games. Mr Mills Junior was a real fan and kept going back for more, whereas Mrs Burniston needed to sit down and compose herself again after her go!

The final part of the Year 5s space week takes place in a couple of hours. Just after 6.30pm this evening, the pupils will be returning to take part in a series of space related activities and fun before enjoy the much anticipated sleepover (or ‘wakeover’). I’ll let you know which in next week’s blog! I will take this opportunity, however, to thank the staff who are giving up their Friday nights with their families to provide another fantastic learning experience for our pupils. Lee Cockerell would be very impressed! I will be up all night keeping an eye on proceedings and will no doubt play the game with parents of ‘who is still reading my tweets?’ and ‘who is up the earliest?’

The class and team photographs were taken on Tuesday and you will soon be sent the details of how to view and order these. Mr Miley and Miss Gooderham have to work very hard to ensure the right pupils are in the right kits at the right time and also get the other clubs arranged with their props. Apparently there were some amusing scenes when the (rather large) flying suit came out!

On the sports front this week, we had two Boccia teams competing in a district competition on Tuesday. The netball ‘A’ team played games on Wednesday and Thursday against Samuel Lucas and St Andrew’s respectively. I enjoyed watching the win on Wednesday but wasn’t able to make the away game on Thursday. I understand from Mrs Bryan that the team played just as well but were not able to turn this effort and determination into a win. The football ‘A’ team had a match on Thursday against a very good Samuel Lucas team in the cup and like the netball team, didn’t manage to get the win. Good luck to Samuel Lucas in the next round. They are a very good team and should go on to do very well indeed.

Thank you to everyone who supported the Friends’ Association non-uniform day on Thursday. The donations were collected and gratefully received by the committee and will be used at the Christmas Fair on Saturday 30th November. One more way our Year 5 and Year 6 pupils can support this event is through volunteering to help out on a stall. A letter came home yesterday and I know they would appreciate some support.

Mrs Nisbet, one of our governors, joined us for our Achievers’ Assembly this morning and saw Mrs McConnell Smith talk about an aspect of well-being we will be developing at break and lunch. Starting small scale, I already have plans as to how to make a change to arrangements from January which will hopefully answer several ‘why’ questions. All will be revealed!

Music was provided by Roisin (Year 4) and Ronnie (Year 6) who both played their guitars. Jude (Year 6) showed his swimming medals and Liliana (Year 5) spoke about a recent dance show. The House Cup was shared between Earth and Air Houses who tied on 232 points each. Class of the Week was Kahlo Class (Year 6) and the joy on Joe’s face was evident for all to see when he lifted the trophy!

Assuming I survive the sleepover and recover over the weekend, the first few days next week look a little less frenetic for me.

A highlight takes place on Tuesday evening as I accompany Miss Gooderham and her family to the Herts Service to Sports Awards. We nominated the amazing ‘Miss G’ for the ‘Apprentice of the Year’ Award and we will be keeping our fingers crossed all night. Look out for tweets from the awards evening.

I am out of school on Thursday morning at a regional NAHT meeting but hope to return just after lunch.

On Friday, we have a special Achievers’ Assembly as we present the first Wall of Fame awards of the year. We have changed the format of these awards and also the location of the board so that it is easier for parents to view and also pupils will see it on a daily basis. We have an adviser from the Local Authority with us all day. She will work with me and my leadership team in the morning and then after lunch she will meet with me and two governors.

That brings this week’s blog to an end. I apologise (particularly to my dad) for its length. That being said, I hope you will agree that the opportunity we had with ‘Mr Disney’ on Monday and his subsequent feedback was well worth the read.

Have a great weekend. I’m going to get ready for a night of ‘space stuff’ and a complete lack of sleep!

What a great opportunity to meet and talk to such an inspirational person as Lee Cockerell, Lilly really enjoyed it! Thanks Whitehill!

What an incredible opportunity for the children; thank you so much for making this happen -Edward Atack was so excited about the visit and clearly took on board some of the things Lee said to them.