A new instrument for us

A new instrument for us 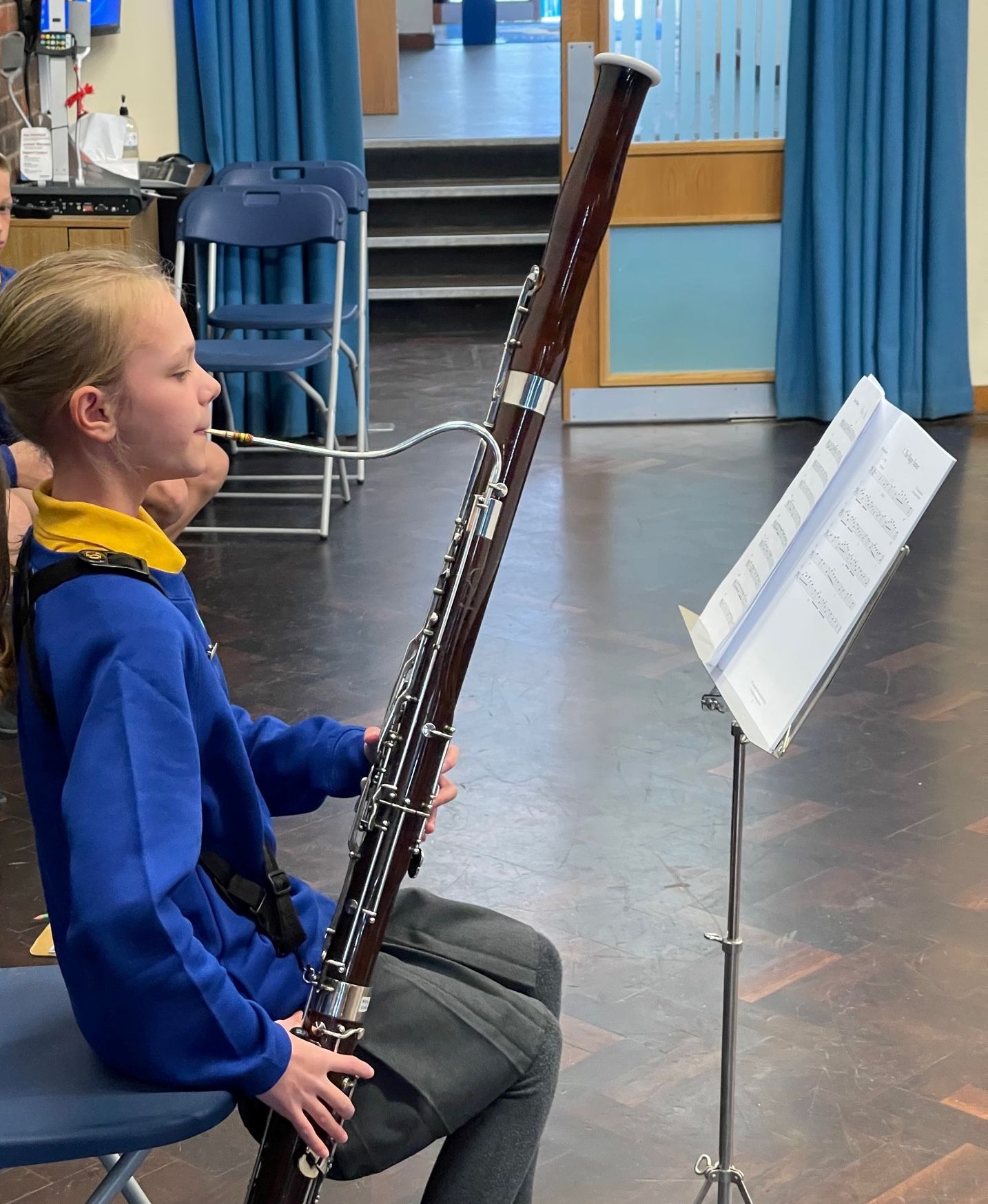 Last Saturday, I am pleased to report that I managed to escape Asda delivery so that I could join Miss Gooderham at Wilshere Dacre School for the Girls’ football festival. The weather was kind and there was plenty of support for the Whitehill Team including Archie (Year 6) who was there to cheer on his cousin and also act as video analyst. The team played six games across the morning and all 11 girls played very well indeed. I have to say, I thought Grace (Year 6) and Ava-Lily (Year 5) made a great defensive duo. I look forward to seeing them play again in the near future.

The week in school started with Year 3 heading into town to visit both the library and Hitchin Museum. Both classes walked down to these two great resources we have on our doorstep and in chatting to Mr Denney and Mr Wells, it was clear that it was a very successful morning. I think the opportunity to hold a 50000 year old tooth was quite a hit. Pupils met up with historian and friend of the school Cas, who shared her enthusiasm and imparted her knowledge. This visit was a good way of generating the interest for the Year 3 Big Dig which will be taking place in a couple of weeks.

Whilst the Year 3s were exploring ancient teeth, the Year 4s were exploring how their teeth work in different ways to help them eat in science. They matched different kitchen utensils to the different teeth in their mouths and replicated the function with food.

We were a few staff down on Monday lunchtime and so my online meeting with a few other union leads had to be cut short so that I could clean tables and trays. I am extremely grateful to Eva and Charlie (Year 6) who offered to give me a hand and it only cost me a Headteacher’s Award and a few extra sausages!

Over the course of the first couple of days this week, the builders were back to put the finishing touches to the two toilet blocks. A row of tiles really makes a difference and I hope the pupils are pleased with the work we have had done. You may recall the initial discussions I had with the builders about how high we needed the washable surface behind the boys’ urinals? Well, I think we have got it right!

I had my first meeting with our newly elected Junior Leadership Team on Tuesday morning. It was lovely to begin to discuss which of their pledges will form part of our long term plan and also which charity will receive the school’s support. We didn’t have Sarah this time, who was visiting a local secondary school but when we meet as a complete group next week, we should be able to reveal what their plans are.

After a parent tour, I had a couple of telephone interviews with the TES (Times Educational Supplement). One was planned and then during that one, I was asked to comment on an embargoed story due to be released later that day. It’s always interesting to hear or read about plans before everyone else. The fact my effort only ended up in a couple of lines of quote in the article is neither here nor there. One parent did spot my namecheck! Thank you, Darcey’s mum!

We had a great opportunity come our way this week when our planned training opportunity for a group of Year 5 pupils was brought forward and they began their peer mediation training. The group once fully trained will form part of our wellbeing team at breaktimes and lunch times to help other pupils resolve some of the low level incidents that occur during games and unstructured time. Couple this with our wellbeing warriors and we will have quite a team.

Year 4s were out on Wednesday at Bhaktivedanta Manor; a local Hindu Temple. Once again, it was a wonderful trip and we were looked after so well. The staff always talk favourably about this trip and come back stuffed! The hosts always feed us so well. The cows are also very popular and are equally spoiled as our pupils aim to feed them as many carrots as possible.

Brooke (Year 3) blew me away on Wednesday with her lovely poem. It was packed with imagery and therefore I took her to visit Mrs Bailey and her Year 6 pupils to share her great work. Mrs Bailey is an expert when it comes to poetry. After all, she has performed for the current Queen Consort, last November.

I had a long day on Wednesday as we held our first full governors’ meeting of the year that evening. Just prior to the meeting, governor and parent, Mr Weir did a quick bit of DIY for us and repaired the guttering on the shelter on the top playground. Pupils will no longer be able to deliberately stand under the leaks and get wet. And after the meeting, Dr Ray, our Chair of Governors delivered the telescope we get to use up until Christmas. You may well see me out on the playground as the nights draw in and the skies are clear, looking deep into space. Please feel free to join me, even returning to school to have a look yourselves. Jupiter, Saturn are particularly impressive to see with your own eyes. I will try and tweet when I am going to be outside.

After my early morning playground duty on Thursday, I headed over to Letchworth to join Mrs McConnell Smith and Mrs Burniston for our first SLT (Senior Leadership Team) strategic planning day. It was a very productive day as we put the finishing touches to some useful school documents.

I made sure the meeting didn’t go on too long so that I was able to get back to school to watch two of our football teams play against Our Lady School. I watched two great games and was very impressed with the football on display. Aidan (Year 5) in goal for one of the matches made some great saves, whilst Bailey (Year 6) looked very assured in front of goal scoring several times. The honours were even between the two schools with one win each.

We celebrated these matches in our Achievers’ Assembly on Friday morning; my favourite assembly of the week. The live music this week was provided by Grace (Year 6) who played the piano for us (on her birthday) and also Maya (Year 6) who played her bassoon. We have never had a bassoon played in these assemblies before and it was amazing. Both girls are very talented musicians, that’s for sure.

This week’s Class of the Week is Wilde Class who have continued with their impressive start to the year. The Wombles headed to Mayan and Fire won the House Cup (much to Mrs Bailey’s delight).

Other news to share with you this week, is a procedural change. I have taken the decision to remove the final couple of ‘time keeping’ bells we still had during the day. There are a number of reasons why this is a good move and means the only time a pupil will hear a bell now is when we need to evacuate. I know this decision has been well-received by a number of pupils in particular. It is another example of my key leadership principle of being prepared to ask ‘why?’

Oscar (Year 3) has reminded me several times this week that he is looking forward to me starting ‘Biscuits with the Boss’ again. I secretly think it was Oscar’s way of telling me to invite him first (I will) when they start straight after half term. These 15 minute sessions which take place on Friday breaktime involve me, a group of pupils, many (many) biscuits and some of Mrs Lanni’s amazing hot chocolate and is a relaxed way of gathering thoughts and opinions of our young people. It’s amazing what they tell me!

Looking ahead to next week, I must remember to get my mum a birthday card for Monday; don’t let me forget! Mr Robinson, our brass teacher is also doing a little tour of Year 4 and Year 5 with Milly who is learning the trombone, to see if he can generate some interest for learning a brass instrument.

You will receive a letter inviting you to book a time for this term’s consultation evening with the online platform going live on Monday morning. The two evenings take place on Tuesday 18th and Wednesday 19th October. If you have any problems, please get in touch with the school office.

We have a couple of rugby festivals on Tuesday and Thursday with teams from Upper School and Lower School taking part. Depending what else appears in my diary, I might try and see if I can watch for a few minutes.

After school on Thursday, parents of pupils in Year 4 are invited in to hear Mrs Davies talk about next May’s Year 4 residential to Overstrand. At the same time, we have a couple more football matches with two teams playing games against Oughton, at home.

I am at Highbury first thing on Friday morning for the Friends’ Association AGM and I hope some of you will be able to join me. We will hear a little about the many successes of the last year and Mrs Avey and I will share how we have spent the money you have helped raise as well as what our plans are for the coming year.

After school on Friday we have our first netball matches of the year with a fixture against St Andrew’s at home.

That’s it for another week. When we come back on Monday, it is October and in October, I have this bungee jump to do! Not long now!