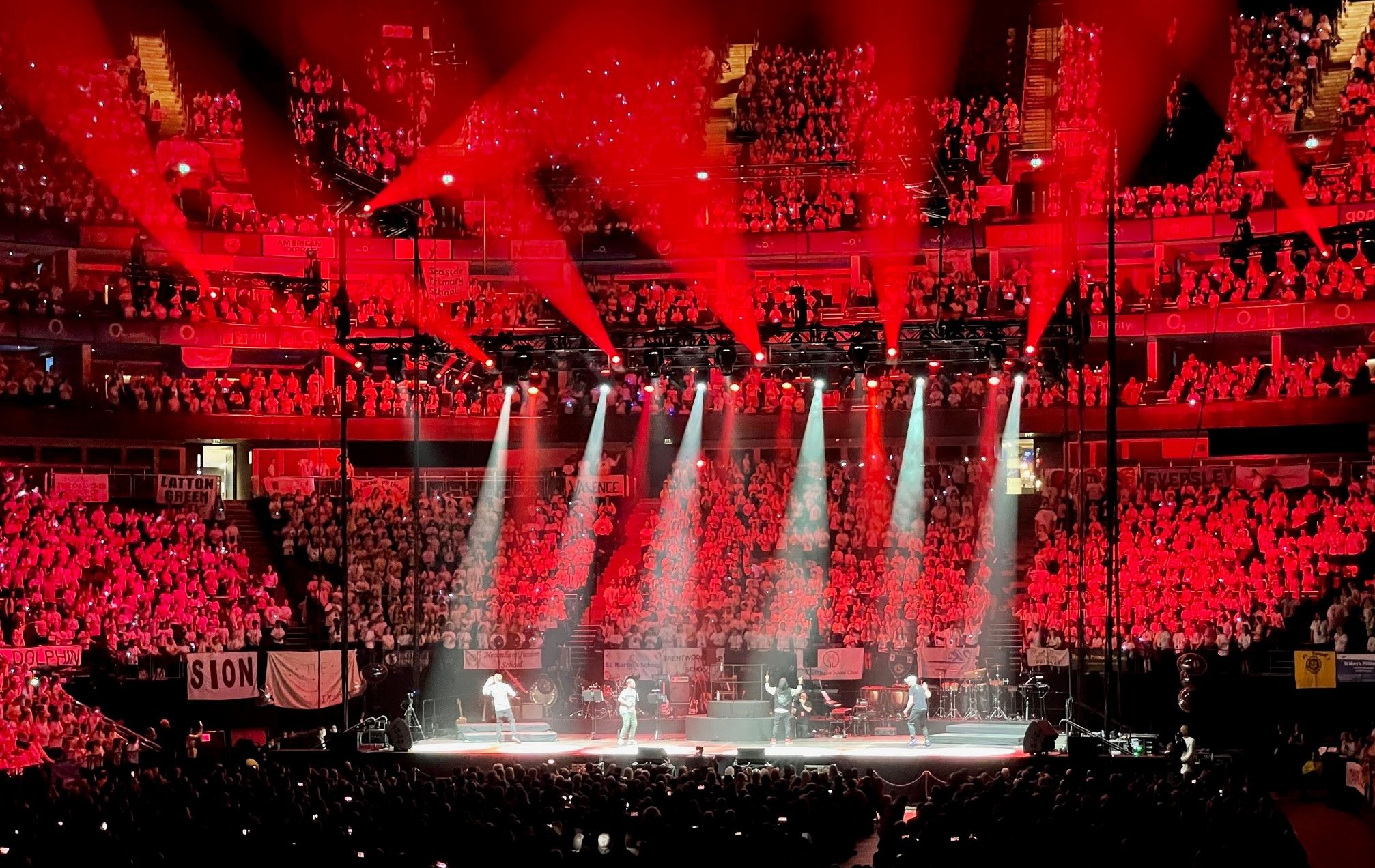 I finished last week’s blog heading down to the O2 in order to watch our school choir perform in the much anticipated Young Voices concert. I am pleased to report I got there in time and even managed to find my e-ticket which I had to download on another ticket app. Surely there is a way of just keeping them all in a single place?

Anyway, the concert was great fun and it is clear the pupils had an absolute blast. Although it was very difficult to pick out individuals, especially with my eyesight, I easily located our group positioned in perfect seats so they could enjoy the action on the stage. I think I am right in saying that there were around 7000 pupils in the choir, all singing their hearts out and having a boogie. Chatting with the pupils afterwards, it is clear they all had an amazing time.

A huge thanks to Miss McGurk and her team of staff who rehearsed with our pupils and then took them. The feedback I received throughout the day was just how amazingly well-behaved they were and what delightful company. Next year, as well as the Young Voices event we also have the opportunity to take a smaller group to sing at the Royal Albert Hall. The opportunities pupils get these days are really quite incredible; I’m quite jealous.

I was going to say ‘the main event’ as I referenced the SATs the Year 6 pupils have been taking this week but I think I will simply say ‘one of the events’ this week. I think some in the profession can over emphasise the importance of these tests which leads to some of the issues for children reported in the press.

For me, they are just a series of tests, like others we do across all four years at Whitehill which allow teachers to see the progress the pupils are making. We are obviously expected to carry out these tests in a more controlled way (by the government) but the pre-test breakfasts and the relaxed starts each morning have ensured the pupils have appeared chilled and even enthusiastic about demonstrating just how good they are.

The test papers have all been collected and we now wait until around the second week in July before we receive the results. Informal feedback, however, suggests that the pupils are confident they have done well and there is nothing I have seen to doubt that.

I did tweet yesterday how proud I was of the pupils and also how grateful I am to the teachers for ensuring our pupils are comfortable with taking tests and making the progress they have, especially with the two years of disruption the pupils have faced.

After supporting the first test on Monday morning, my meeting with local MP, Bim Afolami, did go ahead and I was able to share my thoughts and pick his brains for a good hour. As I have said on numerous occasions, regardless of political allegiances, he is our MP and he is therefore one of my ways into the DfE; it is important I keep these channels open.

From this meeting, I managed a quick bite to eat before our adviser, Martin Roberts, arrived to spend four-plus hours with me and my leadership team talking through the Ofsted process. We are due for our next inspection any time soon and so I just wanted to talk through what we should expect (answer – the unexpected) and what I should have to hand for that initial phone call.

It is safe to say it was an intense day.

After Tuesday’s test, I headed down to Hitchin Boys’ School for my rescheduled meeting with Mr Moane, the Headteacher. Again, this was another very informative discussion which was completed as we ‘walked and talked’ during a tour of the school. It was great to see many former Whitehill pupils and I am pleased to say I remembered all bar one of their names.

Wednesday followed similar format with tests followed by an off-site meeting. This time, I was in Hertford at County Hall for a meeting with HCC’s Education Operational Director, Simon Newland. This was the first in-person meeting we have had there for over two years and it was actually really refreshing to meet this group in person again.

Even though I have been pretty busy this week either supervising tests or being engaged in conversations, the pupils have all been working very hard across the school. The Year 6s, when not testing, have been ‘chilling’ which also included finding out about this year’s production.

Pupils across the rest of the school should firstly be commended for the way they have conducted themselves each morning. With us needing to use every available space for the Year 6s, we needed the pupils to work quietly so as not to disturb the Year 6s. They were so good and I really appreciate their support.

It was lovely on Wednesday to receive a communication from illustrator Chris Mould who was tagged in one of our tweets about the amazing work the Year 4 pupils have been doing. They are reading the Iron Man and as part of this, were drawing their own Iron Men. For those who might not have seen his response, he tweeted:

“Oh my goodness, these are beyond brilliance. I am loving that palette. Very metallic and rusty. Exceptional work and thank you for sharing. Please could you pass on my certificate to them and send my good wishes. Love to all. Jolly well done.”

He also sent over a digital certificate which Mrs Davies and Mr Denney have presented to their pupils.

Year 6 artwork is always very impressive and another incredible display has gone up in Kahlo Class based on Picasso’s Guernica. I always enjoy showing visitors around school and showing off the wonderful artwork in all of our classrooms.

Other pupils who have impressed me this week include Connor and Stanley in Year 3 who were rightly proud of their maths work. They have been learning all about time, including ready analogue clocks (and roman numerals) and showed such a secure understanding.

A group of Year 4s were also keen to show me their maths as they looked to use a compass to construct triangles. They, too, were rightly proud of the Headteacher’s Awards they received.

We didn’t have an Achievers’ Assembly this week as we were treated to a visit by Anthony Glenn who, with the help of some very enthusiastic volunteers, performed Shakespeare’s Tempest for us. We love having Anthony join us and after we had to postpone his Christmas visit, this was a perfect end to the week. We hope he will return later in the year to entertain us again near to Christmas and then in the Spring Term 2023 as part of one of curriculum themed weeks.

The only other key event for me this week was finding out that, after nine years, I have finally been invited on the Year 6 residential. To be fair, I think I am last choice – the only one left to ask – but that doesn’t matter. I am really looking forward to joining the Year 6 team and pupils on their week away in the Isle of Wight.

It doesn’t seem possible that there are only two weeks left now until half term. On Monday next week we have our inter-house netball competitions. I think the weather should be kind, although I thought that this week and we had a couple of ‘iffy’ days.

Our Year 6s are out on Wednesday as part of their geography work. Mr Lord, our geography lead, is joining the Year 6 team as they head, by train, to Arlesey to take part in a river walk and study. It looks like a great day has been planned.

We have a tennis competition on Wednesday and a cricket match on Friday after school. The only other event for pupils appears to be a lower school PE event at Hitchin Girls’ School on Thursday afternoon.

And (almost) finally, I would like to share a Just Giving link for one of our Year 6s, Alana, who will be having her hair cut on 19th May for the Princess Trust. Another example of one of our pupils ‘living’ our core purpose. If you would like to support Alana, please check out her page.

I will finish this week by once again congratulating all our Year 6 pupils for the commitment and enthusiasm shown this week. I am extremely proud of them all and have no doubt, when the results come back in July, we can celebrate some incredible progress across four very ‘interesting’ years. I hope they are able to rest this weekend.