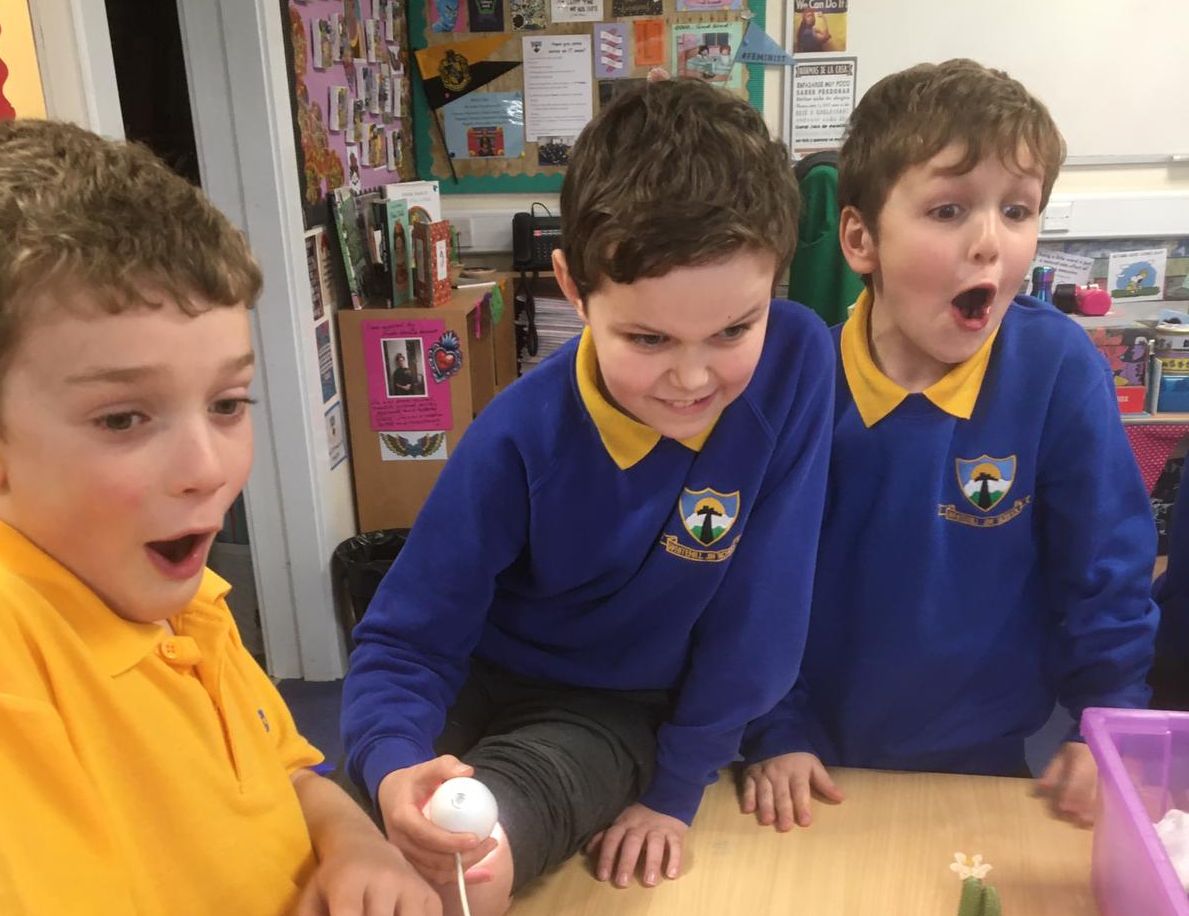 Where to start? If our twitter feed this week is anything to go by, this has the potential to be one of the longest blogs to date. (I can hear my dad moaning already!) That being said, as one parent commented yesterday, the pupils have had such a great week and have been so enthused that they haven’t stopped talking about the week at home. If this is the case, perhaps I should just say the following?

‘The pupils have done sciency and computing type stuff all week! The End’

Seriously, the best feedback I receive from parents either on the playground, via social media on in an email is when they tell me just how much their children have enjoyed something the staff have planned and run for them and how they don’t stop talking about it. Isn’t that what learning is truly about?

Before we look at what the pupils have been talking about this week, let’s start with a mention of last Friday’s quiz organised by our Friends’ Association. After many years of Mr and Mrs Partridge providing the questions and the fun, it was time for someone else to carry the baton and so up stepped Harry Bailey (Mrs Bailey’s eldest son and resident quizmaster at Granello Lounge). It was another fantastic evening and Harry certainly knows how to work his audience. Thank you to all who came along to support and join in the fun. Well done to the group of parents from Orville Class who won. I should also give a mention to the Highbury Staff Team who (for once) didn’t finish anywhere close to the bottom! If you enjoyed the night, please come along to the staff Murder Mystery evening on Friday 13th March. Again, this promises to be a highly amusing evening!

Pupils this week have been off timetable and enjoying science and computing themed lessons, presentations and practical activities. Mr Denney has been running around ensuring pupils and staff have all the resources they need; making sure the hardware remains charged; providing last minute reminders and on top of all that, teaching his own class. Huge thanks go to him for all his hard work!

On Monday, each class was set up with a different science experiment for the pupils to experience. The classes then rotated throughout the day so that they had a go at each one. There were square bubbles and dunking biscuits with Mr Lord and Mrs Bowers. Mr Denney was looking at air resistance through parachute size, although he remains unconvinced that he would rely on anything the pupils made next time he goes flying. Properties of paper and rainbows were organised by Mrs Davies and Mrs Cornell. Mrs Small combined thermal insulation and cooking to make baked Alaska. There was more food with Mrs Bryan who had the pupils making sherbet. Mrs Bailey was getting up close and personal to a range of natural and man-made objects with the digital microscopes. You may have seen the photo of Edward A, Edward B and Thomas (Year 4) discovering what skin looked like magnified many, many times.

Throughout the rest of the week, the pupils were engaged in a series of computing tasks which included VR, coding and green-screening and worked through the activities set for them. Interspersed between these activities were a series of talks and presentations from visiting speakers. Mrs Walton returned with her husband to talk about bees. The ‘sublime science’ company came in and presented a series of fun experiments linked with the work the pupils have been doing in their curriculum. We also had a 70-person inflatable dome take over the hall to show Imax style films, again linked with topics the pupils have been doing as part of their curriculum. On Thursday morning, Fully Fused Fireworks returned to give a talk on their work in putting together large outdoor displays as well as indoor pyrotechnic effects. It certainly went with a bang! One of the presenters has a link with Whitehill in that she was a pupil at the school under the first Headteacher, Mr Richards.

It’s been a great experience for all the pupils. If you haven’t managed to keep up to date with everything we have been doing, I have started to put together an album in the website’s gallery and if it isn’t live already, I will tweet when it is. Again, thank you to all the staff who have helped make this one of the best science and computing weeks ever.

It would be easy to think with all the science and computing we have been doing this week, there would be nothing else to report. How wrong would you be!

On Monday morning Mrs McConnell Smith hosted a well-being coffee morning at Highbury. It was very well attended and parents heard about the ways we support pupils at the two schools and things they can do at home. Amy Louise (Year 6) also spoke about her role as a ‘well-being warrior’. I have uploaded the presentation used onto the school website. Parents will have received correspondence from Mrs McConnell Smith on Friday about a possible project for pupils over the half term break.

After school on Monday, I visited another local school to see the after school club in action that we have chosen to run our facility at Whitehill from September. I have been impressed every time I have met the team behind the club and seeing them in action confirmed this for me. I hope to be able to write to parents and carers shortly after half term to begin the process of registering your interest for this new Whitehill opportunity.

On Tuesday afternoon, I was at Highbury for a meeting with Mrs Avey to talk through matters of the moment which included our after school provision as well as wellbeing and safeguarding.

The Year 4s took a break from the science and computing on Wednesday, when they headed into London as they became published authors. Making use of a far more environmentally friendly and quicker form of transport, I accompanied the pupils as we took the train from Hitchin Station. It was a great journey and the pupils were a real credit to the school. We arrived at London Blackfriars and were able to spend a lovely hour checking out the views from the Southbank as well as eating our packed lunches in beautiful weather before we made our way to the Southbank Centre. The pupils heard their chapter of the book ‘London, Londoff’ read out by coordinating author Sharna Jackson before they all received a copy of the novel which features all their names. We had a chance for a bit more sightseeing before we caught the train home again. It was a lovely day and it has confirmed to me we need to make more use of this form of transport for other school trips.

After school on Wednesday, we had a netball fixture against Mary Exton. The team looked really smart in their new kit and this obviously gave them additional confidence with their performance as they won 12-2.

We hosted a mini-festival of football after school on Thursday, with Samuel Lucas and Wilshere Dacre bringing two teams each. The six teams played a series of short, friendly matches against each other which gave pupils in their football squads additional opportunities to play matches against other schools. Well done to all the players who represented their schools perfectly.

All of this week’s events – and as you have read, there have been many – were celebrated in this week’s Achievers’ Assembly. We were entertained by music from Thomas and Ailsa who played the guitar and violin. The House Cup was won by Fire and Class of the Week went to Aztec Class. Lyla (Year 5) joined me at the front for part of the assembly to launch another charity disco she is running (with the help of her family) for pupils. A flier came home on Friday and tickets will be going on sale when we return after half term.

During break time and part of lunchtime, I had a blast as I found some Year 3s from Mayan and Aztec Class who wanted to learn how to play marbles, ‘Mr Mills style’. Fynley and his friends were quick learners and played with such enthusiasm. They are an absolute delight to teach and I can see this developing into a regular club.

This blog brings us to the end of another half term and marks the halfway point of the academic year. I hope you can use this break to rest and recharge so that we can begin the second half of the year ready to learn and ready to enjoy another series of exciting opportunities and projects.

Looking ahead to the first week back, I have been invited to attend Rotary Club’s meeting on Monday evening so that I can present them with a cheque for the Purple4Polio charity. This money came from the Year 3 Christmas Production and it seems timely that I am handing over the cheque just as the crocuses we planted are starting to come through.

There is a netball fixture after school on Wednesday against Offley School and on Thursday we have pupils taking part in an archery competition.

At the end of the week, I will be accompanying Mrs Bailey and the pupils to St Christopher School in Letchworth as we take part in this year’s Recycled Fashion Show. Pupils have been working on their creations as an after school club each Thursday, with Mrs Bailey and Mrs Davies.

So that’s it. My dad will be on the phone later to moan that I did end up writing this much but I think secretly he does enjoy reading about the amazing work of the pupils and staff. Enjoy your break. I am off to Prague for a few days and then I have the half term project of putting up a stage for the Murder Mystery.

See you on Monday 24th February!