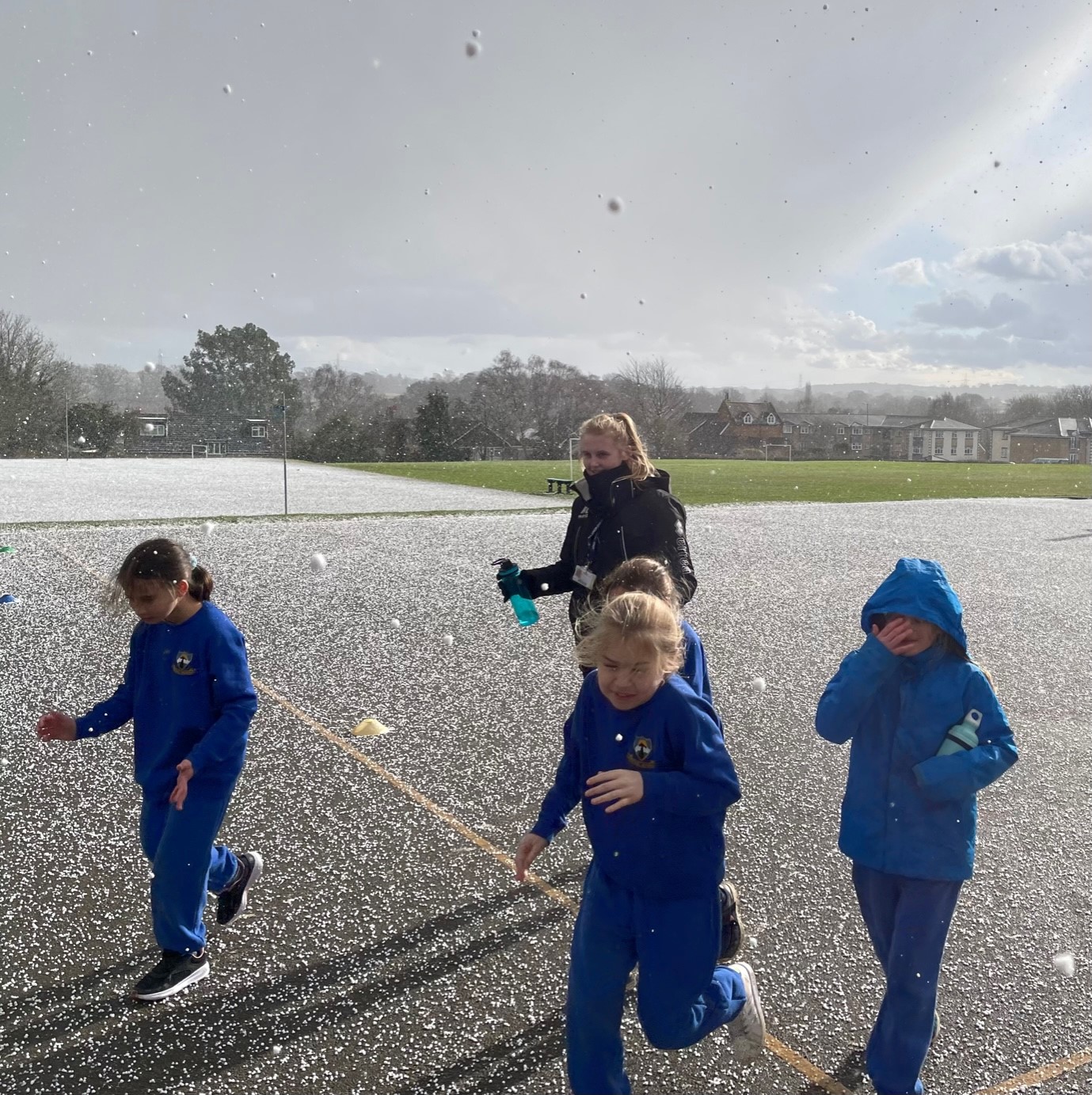 What a way to start the new half term! This week has been such a hive of activity with all things ‘science and computing’ as I am sure you will have seen from the many photographs the staff have been sharing with you via twitter.

I did manage to get to the West End during my week off and, for those of you who have been keeping count, saw my favourite musical for the 23rd time! To date, I am yet to be offered a part but am getting very close to being word perfect. If only I could sing and dance!

At the end of the week, I kept my fingers crossed whilst the storms crossed Hitchin, hoping that our grounds would get away without any damage. Around 4.30pm, it was safe enough for me to come over to school to inspect, having spent most of the afternoon watching Big Jet TV. It was pleasing to see no damage to the Whitehill School grounds but there was one small tree down in Goslings. Fortunately, there wasn’t too much damage and it didn’t prevent them from opening on Monday. We arranged for the tree to be removed early this week.

So, as I said at the start, this week has been given over to all things ‘science and computing’. It has been incredible to spend time visiting every class each day and seeing what activity or task or talk they are doing. There is so much learning taking place and so much enjoyment being had.

Our Year 6s had a one-day delay to their week as they headed off to London and Tate Modern on Monday, by train. It looked like a really enjoyable day out and I know the staff and pupils appreciated the fact that the method of transport was a 35 minute train journey as opposed at least two hours on a coach. Thanks must go to the station manager at Hitchin for his help in getting the pupils to the platform and onto the train.

The pupils enjoyed exploring the artwork even if the word ‘art’ has to be very loosely applied in some cases. I am not sure, for example, the significance behind the Co-op receipt. If that is art, then my wife with her (huge) collection of receipts is going to be very wealthy indeed!

Other pieces were much more interesting however and it was lovely to receive some great feedback from other visitors to the gallery about the behaviour and engagement of our pupils (as always).

Back in school, the other six classes were taking part in a carousel of science experiments being led by the teachers. They ranged from the elasticity of a Curly Wurly to the strength of an egg. Food was also involved when they got to make their own ice cream or look at the dyes used in a skittle. My observation of tasting the ice-cream was that commercially made ice cream must contain a ridiculous amount of sugar!

The theme of Tuesday was ‘spy day’. The brain-child of Jasmine (Year 6), Mr Denney and the other staff worked with her to ensure the activities all had a spy theme. This included a special visitor from Bletchley Park who brought in an Enigma machine for the pupils to learn about. Andrew Fryer, the Learning Officer from Bletchley Park said after the day that he was, ‘impressed by [the students’] enthusiasm and the way they responded to questions with excellent answers.’

Each class also took part in a code-breaking, clue-solving treasure hunt type activity which had pupils running all over the school trying to locate the missing goods. All of Hitchin could probably have heard Aztec Class as they solved all of their clues to rescue Dave the Dog!

‘Chemical Chris’ from Sublime Science was in school all day on Wednesday. His fast-paced workshops were brilliant and covered so many scientific concepts. I even got to have a go at one of the experiments, as did Mrs Small who acted as his (very) able assistant all morning.

Other activities planned for throughout the week have included coding and programming. Trying to navigate race tracks which has caused no end of fun, particularly when left became right and right became left when the Sphero was coming towards the pupils and not away from them.

Over the course of the whole week, different classes enjoyed talks and presentations from some of our parents who are ‘real life’ scientists or engineers. There was such a range and they were all so interesting. A huge thanks to those who were able to give up their time to come in and support this initiative. One of the talks I was involved in was given by Mrs Wilson who now uses her science background as a technician at Hitchin Girls’ School. She demonstrated some different experiments which also included showing how, as we get older, the frequency range of our hearing decreases. All I will say is, I must be very old, and Libby (Year 4) isn’t!

On Friday morning, we held our usual celebration assembly but for the first time since the end of September, we had all of the pupils back together in the hall. It was brilliant to be able to see everyone together again. I will miss the blended approach as it was fun pretending to be a TV presenter but nothing beats face to face opportunities.

Music this week was provided by Joni (Year 3) who sang for us. She did so well to perform in front of everyone. Keya (Year 6) played her flute as well and again, it was lovely to have everyone in to hear just how good she is.

The evening before, we had had two sporting fixtures and so we heard all about them this morning. Our football team took part in a Wix Cup match against Oughton and booked a place in the next round with a 7-1 victory. We also had two netball matches against St Andrew’s which resulted in one win and one defeat. I watched the majority of both games and was impressed by the players on both teams. Spencer (Year 6), in particular, caught my eye, as did Keya (Year 6).

Class of the Week went to Voyager today and the Wombles went to Kahlo. Water won the House Cup as we celebrated all the merits which had been awarded. Three boys who contributed to their House totals were Stanley W, Albie and Connor (Year 3) who received Headteacher’s Awards for their programming work.

Biscuits with the Boss was fun again this week, as I continued with my goal of sitting down with every Year 3 and talking about their time at Whitehill to date.

Lunchtime on Friday was manic! Great… but manic! I started on lunch duty and then visited the library to see a wonderful new collection of books in a whole range of different languages representing the many languages spoken amongst our school community. From there I joined our Eco Team who are now putting together their action plan for the Eco Flag award. My sub-team of Milly (Year 4), Deena (Year 6) and Alana (Year 6) have lots of ideas which I will help them fulfil.

Looking ahead to next week we revert to our usual timetable and get back to routine. We have a visit from Cas on Monday afternoon to talk with the Year 6s about Black History in Hertfordshire. We engaged in a similarly themed project last year and on Thursday this week, the museum shared the results of their work including the contribution of last year’s Year 6s.

I am out of school on Tuesday morning visiting Hitchin Girls’ School in my role as a governor there. This will be my first link visit for over two years and I can’t wait.

We have several sporting fixtures including football and speed stacking and then on Friday, I am out again (after Achievers’ Assembly) with Mrs McConnell Smith visiting Simon Balle School in Hertford to talk about SEND support across the county.

That’s it for this week. It has been an awesome and inspiring week and I have learned so much as I know the pupils have. A huge thanks to Mr Denney for putting together the week’s programme and to all the staff and visitors for their contribution to ensuring Whitehill pupils continue to enjoy and benefit from a broad and balanced curriculum. Over the course of the next week or so, I will get a collection of photographs from this week in our website gallery. I’ll let you know when they are they.

What a wonderful week for the children – thank you Team Whitehill for all you do for them!