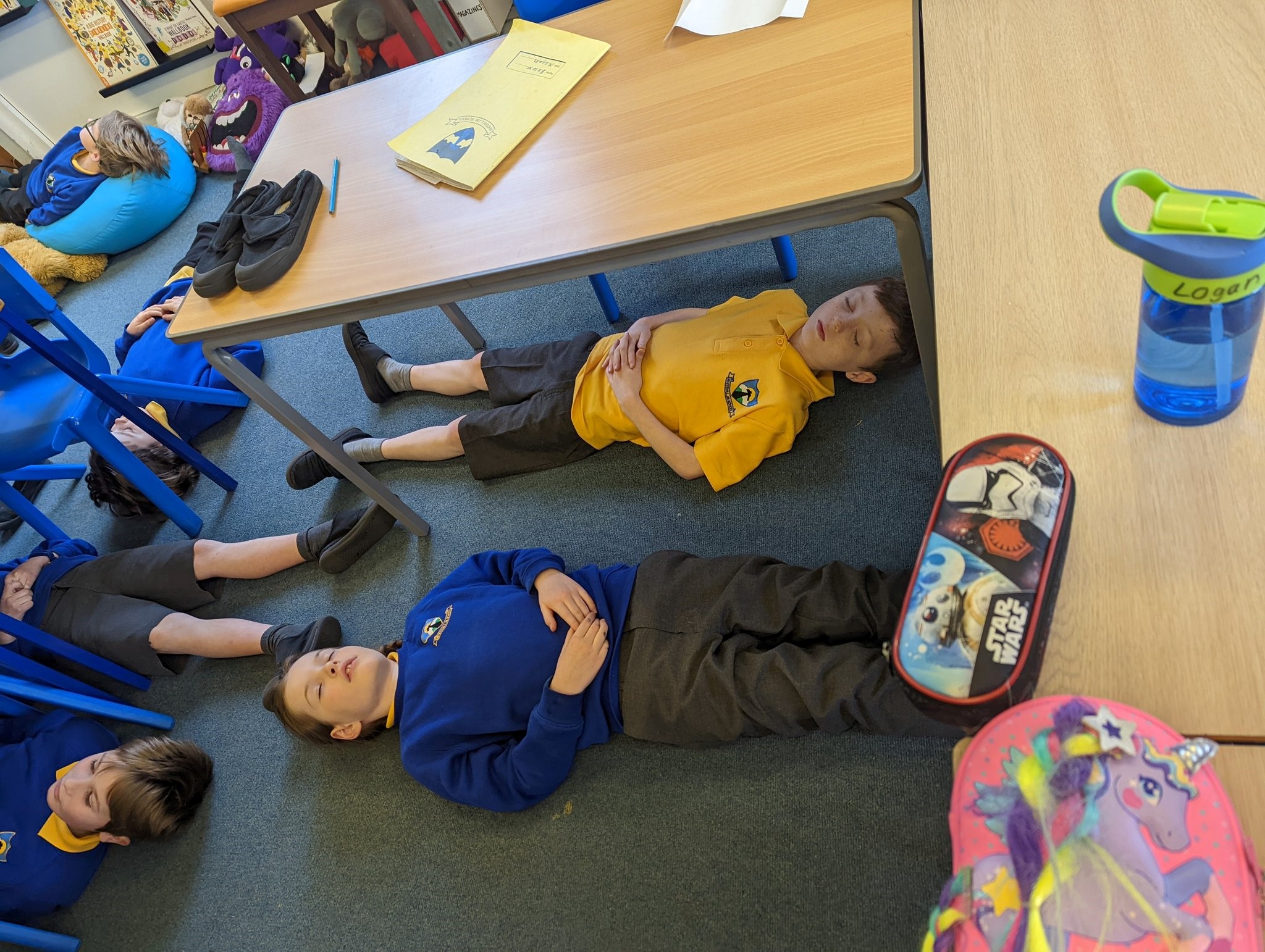 My blog this week starts with the exciting news from last weekend when Mrs Small took four teams of cross country runners to St Albans for the County Championships. Six Year 6s and six Year 5s were selected to represent the school in this event, competing on a course around Westminster Lodge. I was kept informed and updated all morning and was so impressed by the results. All of the athletes performed so well and I am delighted to confirm that Leo (Year 5) Stanley (Year 6) have both qualified for the National Finals next month. This is an incredible achievement and so, with the trampolinists also competing at national level, March is going to be an exciting month on the sporting front.

As we worked up to the half term break, there has been an overarching theme of ‘wellbeing’ this week, with each day given over to one aspect of our ‘five ways to wellbeing’. Pupils and teachers spent a few moments across the week looking at making connections; taking notice; learning something different; being especially active or being generous and giving. It was lovely walking around the school and suddenly finding pupils practising mindfulness or learning a few new words in Spanish. Nandi (Year 4) presented me with my name written in Japanese which was particularly lovely. Teachers also made use of our wonderful outside space and went for walks and connected with nature.

Over the course of the year to date, we have had pupils absent with Covid but have been generally very lucky with staff members. These pupils have been able to engage with their learning still via the remote provision set up by their teachers. This week, however, the roles were reversed slightly when Mr Denney delivered four days of teaching from home, with this learning being facilitated by Mrs Keeling. It has been incredible to see and shows just what is possible. Mr Denney even delivered the whole school assembly on Wednesday morning. I wrote to all parents this week highlighting the hard work of the teaching team to make remote provision work and I am more than happy to highlight it again here. I do think it is exceptional and something we should feel extremely proud of.

On Monday afternoon, I spent some time in both Lamarr Class and Orville Class channelling my inner Keith Brymer Jones as both classes worked with clay. Linked with Peach Boy, they were making hollow peaches which they will go on and decorate. It was great fun and after a bit of guidance, the pupils all did very well. I am looking forward to seeing their finished pieces.

We have had several football matches this week and the results have all gone our way. On Tuesday, two teams played against Ickleford, including a game for a Year 4 team. Trying to avoid getting my shoes dirty, I took up a vantage point on the netball court so I could watch both games. The Year 4s looked very strong, with Arthur opening the scoring with an amazing strike from the touchline. Finley D also impressed, demonstrating ‘Maradona turns’ all over the pitch and by the end of the game the score was 8-0 to Whitehill. I think when this group join forces with the current Year 5s next year, we are going to have a very strong team indeed. The other match also resulted in a win, again without conceding a goal.

On Wednesday, it was the turn of the girls to take the field in a Wix Cup match against Wymondley. I watched as much as I could, again without getting my shoes dirty, until the rain got too heavy. Jasmine (Year 6) played with her usual determination and I believe Elsa (Year 6), in goal, didn’t touch the ball. The result was 3 – 0 to Whitehill. Well done to all three teams, in all three matches, which we celebrated on Friday in our Achievers’ Assembly.

I didn’t get out of my room at all on Wednesday morning and for the most of that time my door was shut. I made up for this after lunch however, by visiting Kahlo Class for the final time to complete their technology. I have really enjoyed my time teaching this unit of work and have been ever so impressed with the quality of their cars. They have worked with precision and thought and have all achieved success. I look forward to feeding back to them with some positive comments.

Thursday was my day to try and catch up again on paperwork but I have reached that state of mind whereby I say to myself, ‘I can do that over half term’. I don’t think half term is long enough for some of the things I keep putting off!

In our celebratory assembly on Friday morning, the music was provided by Ellie and Jasmine (Year 6s) who played the piano for us. As well as the football success, we also celebrated the already-mentioned cross country teams. We shared in Anya’s (Year 3) swimming success as well as Darcey’s (Year 4) ballet certificate. Jacob also shared his successes including a Chief Scout Award.

This week, Orville won Class of the Week; Fire won the House Cup and the Wombles stayed with Apollo Class (although I think Mrs Bailey and Kahlo Class want a recount!).

At break time, I held another Biscuits with the Boss and enjoyed the company of another group of Year 3s. One of the jobs I must now do over half term is purchase considerably more biscuits! How Year 3s consume so many, and still be able to chat, is beyond me! It was a really lovely discussion and they all spoke so eloquently about life at Whitehill. Kira amazed me with her knowledge of Shakespeare and likened a story I told them about something I once did, to the synopsis of A Comedy of Errors. Such knowledge was amazing.

After break I visited Voyager Class to watch a play, written by Benny (Year 5) and performed by a group of his friends. Called ‘The Muppets’ it was very funny and Benny clearly has a talent for comedic writing. I have told them that they can perform it in a Monday assembly in the coming weeks.

We can now enjoy a week to rest and reset. Assuming the data are positive upon our return, I will look to reintroduce whole school assemblies, hopefully starting with the happiest one of the week, Achievers’ Assembly on Friday 25th.

This first week back is one of our curriculum themed weeks with a focus on science and computing. There is a slight deviation to this for the Year 6s who don’t start their themed week until Tuesday, as they are off to London on Monday for an art adventure. Heading to the Tate, they will go by train as it is just so much easier and far more relaxing for all involved.

There are so many things planned for the week including a ‘spy day’ which was the brain-child of Jasmine (Year 6) one of our Junior Leadership Team. Look out for tweets during the week and also a more detailed review in my blog at the end of the week.

There are several sporting fixtures too, including football and netball matches against St Francis, St Andrew’s and Oughton.

So that is it. I hope you do all get a chance to relax and enjoy some family time together. I will spend some time in the theatre I hope and I am also looking forward to meeting up with my former deputy head, Mrs Beresford, for coffee on Monday.

Have a great week!

Well done everyone – what a vast amount of successes achieved this week!