If They’ll Have Me

If They’ll Have Me 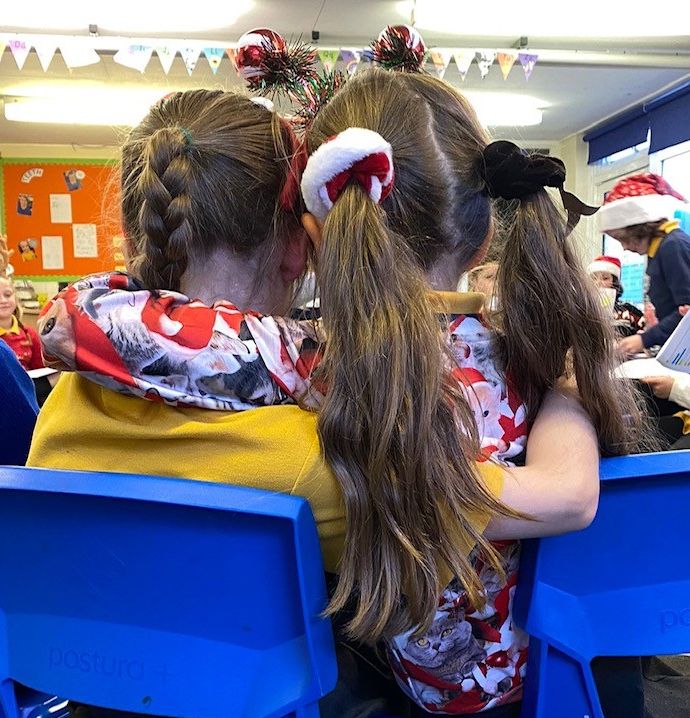 Despite the fact that the piles of paper in my office have not got any smaller this week, it has been worth it as I have had the pleasure of spending a lot more time with pupils. Over the course of the week I have worked with individuals to support them with assessments; I have taught technology to a class and have had another totally inspiring ‘Biscuits with the Boss’. I have also witnessed some very impressive performances and final pieces of work across all four years.

It has been quite a busy week for the Year 6s as they undertook a series of assessments to allow the teachers to check progress to date and also identify the priorities for the start of 2022. It is important that we assess the content we actually are aiming for and to that end, we often make use of a reader in some tests so as to remove a potential barrier to accessing the questions. I have seen first-hand again this week, the impact this can have on outcomes. It might also be appropriate to support pupils by acting as their personal time-keeper or ensuring they are able to take necessary breaks.

Whenever I sit and work through an assessment with a pupil, there is also that little bit inside me which wants to make sure I can answer the questions in my head without the need for an answer paper. I was pleased with my success rate this week! Well done to the all the Year 6s who have embraced the need to assess this week and done their very best. Plenty more work to do but given the obvious disruption, progress is good.

It hasn’t just been the Year 6s who have been working hard on their assessments. Many of the other pupils have completed some diagnostic maths assessments and teachers have been keen to show me the results. Mrs Small – one of our maths leads – drew my attention to Lamarr Class in particular.

We held another set of prospective parent tours on Tuesday afternoon. To keep numbers down in each tour, Mrs McConnell Smith joined me and took a group of parents around the school. It was a really enjoyable afternoon with a chance to explain what we mean by ‘profound individual growth’ and how this might be achieved. I’ve been teaching long enough now that it was bound to happen at some point but I have known one of the prospective parents in this round of tours from when they were a child. I wonder if we will see their children at Whitehill in the coming years so I can face the comment, ‘You taught my mum!’ (I obviously started teaching when I was 14!)

The main event on Wednesday and many would argue the week, was this year’s Christmas lunch. Once again, we went with four sittings, working through the year groups from three to six. A huge thanks to Mrs Stokes and her team for serving just over 250 lunches in just over 90 minutes. You may have seen the photo on twitter of three year six girls who were determined not to let anything go to waste; especially the stuffing which Eleanor thought was particularly delicious!

At break on Thursday (and one day earlier than planned) I had the pleasure of six Year 3s for ‘Biscuits with the Boss’. I thought the Year 5s I had last week could consume a lot in the 20 minutes we had but the Year 3s certainly gave them a run for their money. Despite eating plenty and drinking some of Mrs Lanni’s amazing hot chocolate, the pupils still found time to share with me what they have enjoyed about being at Whitehill. It is worth remembering that our current Year 3s last had a full year in school when they were in reception and so it was wonderful to hear their thoughts. They all agreed that Mr Wells and Mr Lord make learning fun!

Straight after lunch on Thursday, Mrs Wells, with the help of some parents took a group of Year 3 and 4 pupils to a dance workshop. They had a great afternoon and choreographed some wonderful dances. They were also very excited upon their return to show off their medals.

Whilst they were dancing, I joined Kahlo Class to help with the start of their technology project looking at designing an electric car. This unit of work combines some of their science work on electric circuits with their design and technology. I hope to join them for the majority of these sessions as I really enjoyed teaching these subjects when I had a class of my own before becoming a head. That is of course, if they will have me!

There were other highlights on Thursday, including hearing Wilde Class sing ‘Revolting Children’ from Matilda the Musical. Eddie accompanied the class on the piano and the choir was under the musical direction of Miss McConnell Smith. I also enjoyed seeing some of the ‘revolution boxes’ the Year 6s had put together which for Edward B, included some original East German toilet paper and a piece of the Berlin Wall.

Straight after school I was in a series of meetings with colleagues from across Hertfordshire as part of my NAHT work. It is clear from our discussions that there are a lot of tired leaders across the county who are managing their settings in some exceptionally challenging circumstances.

In this week’s Achievers’ Assembly on Friday morning, we celebrated the lower school dancers as well as presenting the usual awards. I was joined in the hall by the Year 4s who saw me present the House Cup to Air and Earth as joint winners. Orville won Class of the Week and also won the Wombles – again! The live music this week was provided by four very talented singers. Kodie (Year 6), Chantal (Year 6) and Edie (Year 5) sang one song and then in true Sugababes fashion, swapped one of their vocalists (Edie) for Aisla (Year 6) for their second song. As with Oliver last week, they were amazing and I particularly enjoyed the harmonies provided by Edie and Chantal. Well done, girls!

We had to keep to time this week (more than normal) so that we could get the hall ready for the Year 3 dress rehearsal. It was a real shame we didn’t have the rest of the school in the hall to watch but we did find some very enthusiastic staff and volunteers to provide a bit of a live audience. I really enjoyed seeing the pupils perform Plastic Pirates and can’t wait to join them for three more performances again, next week.

As well as these performances, we have a real treat on Monday as part of my assembly, as we celebrate St Lucia day – a Swedish festival – thanks to Lilly (Year 6). That afternoon we welcome Phase to school to work with the Year 6 pupils again.

On Tuesday, there is the joint Senior Leadership / Junior Leadership meeting which, as a treat and as promised, is off site at a local restaurant. At the same time, our running club is going to be taking part in a ‘Santa dash’ and I know they have been trying to recruit a few additional volunteers amongst the staff, to take part.

We finish for a very well-deserved Christmas break at 1.30pm next Friday.

That’s it for the penultimate week. As I stated at the start, it has been a really enjoyable week spending some quality time sharing in the pupils’ learning which, after all, is what school is all about.